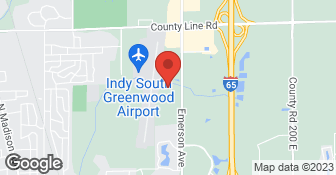 Indy Irrigation, Inc. is a locally owned and operated company with 27 years of experience. We only specialize in servicing existing irrigation systems and installing low voltage LED landscape lighting. We do not do installations of new systems. We currently service approximately 2000 customers throughout central Indiana. Indy Irrigation, Inc. would be delighted to welcome you to our growing number of satisfied customers....

Scheduling for opening was June 4 could have used my system in May. Silas was the technician he called ahead and did an excellent job. I had one sprinkler head repaired and one moved from under a bush. Silas explained all that he was doing and was very professional. Indy Irrigation installed my system and has maintained it for a number of years I will continue to use them and would recommend there service.

We have been using this company for several years to tend to our irrigation system. While restarting the system this spring the technician missed a rotor that had not retracted entirely after a test run -- it was raining that day. Next morning our lawn mowing company accidentally ran through the rotor. I informed Indy Irrigation of the mishap. It was quite cool and rainy then so we were not intending to use the system for a while. Still, later that week a technician, Jason I believe his name was, stopped by and replaced the head. He was very courteous and nice to talk to. Since the problem had happened right after system activation Indy Irrigation waived the charges which I was appreciative of. (I have never understood why certain companies nickel/dime their customer when they stand to make so much more over the course of a long term relationship.) Once again, a thumbs up to Jason for his customer service skills which I feel are so so important in a company and its representative. Also want to acknowledge Danielle for her prompt response and scheduling.

Zach was exceptional- Honestly one of the most polite, respectful and knowledgeable people I have met within this service.

Description of Work
Openings and back flow

Thanks for the feedback!!! We appreciate your business. I will definatley let Zach know what you said about him. Let us know if you need anything this summer!!!
5.0

great service and price , hands down the best irrigation company in Indiana!! Lisa & Kenny are great to deal with they really know the correct way to run your sprinkler system with efficient ways to save money. my grass looks great.

They work around our schedule to come and turn it off and turn it on. They are the people that installed our sprinkler system. They installed most of the systems in our neighbor. They are here when they say they are going to be here. It's doing great.

It was fine. They're pretty standard for what you would expect. You just get the service done. It's kind of like getting your teeth cleaned.

Description of Work
Turned it on for the season.

Kenny and team do a good job and office staff are responsive.

Description of Work
We have Indy Irrigation out each year for the past 7 years to open and close our irrigation system, perform required backflow testing for permit and adjust heads.

I've been using them for probably 9 years. They come and do what they are supposed to do and it's very easy and it's all good.

Description of Work
I've used Indy Irrigation. They turn the sprinkler system on in the spring sometimes.

I would definitely recommend Indy Irrigation for any needs. They are prompt and always quick to respond to questions.

Description of Work
Check up of my irrigation system

This company has serviced our irrigation system for several years. We are very satisfied with their work. Kenny and Lisa are great . I would recommend them to anyone .

Description of Work
I use Indy Irrigation to open up the irrigation system each year and they winterize it at the end of season.

We install landscape lighting systems that will beautify your home and landscaping. If you have a system and it needs service let us know and we will be glad to help. When we meet we ask lots of questions and listen. Lighting is personal. Lighting adds beauty, safety and security. Every home is unique and it is important to reflect your tastes in the design. Our goal is to create a masterpiece as we paint with light – beauty and elegance.  …

Glimmer Landscape Lighting is locally owned and operated. We specialize in working with you to create the perfect lighting design for your specific taste and budget. We also offer an app to get you a contactless quote within 90 minutes*. This free app is "Glimmer Landscape Lighting" and is available for both Apple & Android phones. *90 minute quotes are available during regular business hours, anything submitted outside of regular business hours will be quoted the next business morning  …

Our story starts in 1983, when we began developing the best formulas for Indiana lawn care. Because we know all about the soil, grasses, weeds, and insects in your yard, we know exactly how to make it beautiful. It is time to take the guesswork out of caring for your lawn and rely on our regional know-how to get the job done! We do not just work hard for your lawn; we work hard for you. Our strong commitment to customer service means that your concerns, questions, and needs are greeted with respect and appreciation. With our small-town Indiana roots, we are both your neighbor and lawn care provider.  …

Irrigation Installation, Service and Repair. Indy Irrigation, Inc. also has a division that is Indy Lawn Chemical to help with all your Chemical, Aeration and Over-seeding needs for your yard. We also provide all your outdoor LED lighting needs for your property.

How is INDY IRRIGATION overall rated?

INDY IRRIGATION is currently rated 4.9 overall out of 5.

What days are INDY IRRIGATION open?

No, INDY IRRIGATION does not offer eco-friendly accreditations.

Are warranties offered by INDY IRRIGATION?

What services does INDY IRRIGATION offer?

INDY IRRIGATION offers the following services: Irrigation Installation, Service and Repair. Indy Irrigation, Inc. also has a division that is Indy Lawn Chemical to help with all your Chemical, Aeration and Over-seeding needs for your yard. We also provide all your outdoor LED lighting needs for your property.