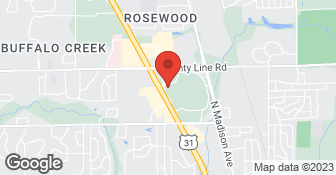 Great. I have a special needs son of 11 yrs old. We were recently gifted a bicycle trailer for him, but I didn't have an appropriate bike for pulling that much weight. Dick's helped me in choosing the correct style and brand. Price was a little high, but no higher than other bike stores.

Description of Work
I needed advice in purchasing a new bike. They helped me in choosing the perfect bike, made sure it was ready for riding, and loaded it in my van.

This review is not for D**** themselves, rather their contract service that installs the basketball goals. It is called My 6th Man. We were originally scheduled on 4/11, then they canceled us due to cold weather and told me I would get rescheduled right away. This did not happen, and the following week I had to call back and get scheduled. During this call I had to get a manager on the phone because they were going to push me out an additional week, which was unacceptable due to my son's birthday being on the 18th and this was his birthday present. They finally came out for Phase 1 (dig hole, fill with concrete) on April 23rd and did phase II on Friday the 27th. The condition they left the surrounding grass in was not acceptable - they left a huge pile of dirt on the grass even though I asked for it to be on the driveway, then they left dirt clods all around the area and did not fill in the area where the form was around the goal. They also didn't take away the boxes, which is apparently in the contract but was not made clear to me at purchase. All in all, this was a negative experience on a $700 expense. For $700, they should do a better finishing job than what they did. When I gave them feedback and made them come back out to finish their job, the person began to argue with me about what was and wasn't said - the cardinal rule broken in customer service.

WE FELT LIKE THE PRICE FOR THE BASKETBALL SYSTEM AT DICKS WAS ABOUT AS COMPETITIVE AS WE HAD SEEN ANYWHERE ELSE IN INDY. THE SALES PERSON WAS VERY KNOWLEDGEABLE ON BASKETBALL SYSTEMS AND TOOK THE TIME TO UNDERSTAND OUR NEEDS AND DIDN'T OVER-SELL US ON A HIGHER PRICED SYSTEM THAT WE REALLY DIDN'T NEED. THE ONLY THING I WISH WAS THAT THEY WERE ABLE TO INSTALL THE SYSTEM FOR US. I BELIEVE THAT THEY WOULD HAVE INSTALLED IT, BUT THE COST WAS TOO MUCH. WE ENDED UP INSTALLING MOST OF IT BY OURSELVES AND RECEIVED SOME ASSISTANCE FROM OUR CONCRETE INSTALLER SINCE WE HAD A BASKETBALL PAD POURED.