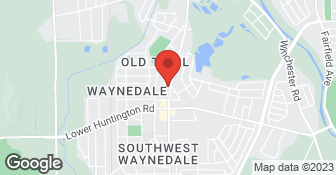 This was an Angie's List "deal". Performed cleaning, check up, adjustments - Legacy was on time, clean, and didn't try to up sell me on any other parts or service.

Jason came to fix it, and was even early and found the problem(s) and had them repaired in a timely fashion. He was very nice and very helpful and explained to me what needed to be done to get us up and running. Minka in scheduling was also very nice and helpful and called ahead to let me know Jason was on his was. I would definitely recommend them and if needed would use them again.

Description of Work
Furnace was blowing air, but would not heat up.

Ashley, the technician that serviced my Goodman furnace was punctual, and professional with the cleaning and performance inspection of my furnace.

Description of Work
Ashley, the technician that serviced my Goodman furnace performed a cleaning, and a performance inspection of my furnace.

The technician replaced the filter and took A significant amount of time Inspecting, adjusting, and cleaning parts that were sometimes difficult to clean.

There might be a little cost; they have not billed me yet. It was a follow-up for the new unit they previously installed. Because they installed it in the winter, they wanted to check for the summer to make sure the air was working correctly, but while they were there they changed the filter.

Description of Work
They installed a heating and air conditioning system in a rental house.

Everyone involved was very friendly, helpful, and efficient. The installation technician corrected several obvious flaws from the past installation and brought it all up to code - including obtaining the proper installation permits. The new unit works much better than the old one ever did even though that one was supposedly a very high end unit - I know it was high dollar. I've had mixed results over the years with other local companies, but am very pleased with my experiences with Legacy.

Description of Work
I've had them service my aging furnace and air conditioning system for the past couple of years. When the furnace finally failed with a cracked heat exchanger they we most helpful with a high quality/high efficiency unit at a very reasonable price.

The guys were very polite. There was a lot of miscommunication about coming into the building to service it. I got a warranty so I have to use them but I would not refer them to anybody.

Description of Work
They came and installed a furnace.

Service was scheduled promptly and serviceman arrived on time.

They came out three times. They replaced my furnace and it's a used furnace, but it's a new used furnace. When they installed it, everything was going fine. A tech came out. The reason for the tech coming out was just coming over here just because I don't live where I work. I just came over here and it was reading like 58 in my basement ad it's like 38° outside. So I'm like, "That's cold and it was set to 70." I know that nobody had touched the thermostat. So I called them over. They were very polite people, but when he came, the gentleman that was in the home working had to leave and go get another part, come back and then he left, came back and when he left, he left a tool inside [the daycare. So then he came back saying that he hadn't finished it, but he needed another part of, the part that he had wasn't right. I went three days without business and they didn't want to compensate me for my business over something that I should have been compensated for. The owner called and was like, "my mom does what you do." I'm like, "You should see what it feels like because my parents stay daily." I couldn't get compensated for my mishap. So I said, "If I ever had to do a review, I wouldn't refer nobody to come back to you because there was a part that you had, you came back and left something in my daycare,then you leave something, then you leave a light on and then he had me leave my daycare open and never came back. So there was just a lot of unfortunate situations. I was annoyed with that.

Description of Work
I needed a heater replaced.

They are knowledgeable and take their time to explain what they are doing.

Dawn was very easy to schedule the appointment with...very responsive as we had to go back and forth a couple of times to get a date that worked for both of us. I appreciated her sending me multiple options to choose from. I was called a day ahead of service as a reminder. Then I was called 15 minutes before service tech came...I really appreciate this! Service tech was friendly and seemed knowledgeable. I used Legacy last year and was pleased both times.

Description of Work
I just had my furnace cleaned and serviced for the season.

The bill was prepaid and when the tech left he told my daughter that I needed to pay the service call. This upset my daughter who kept calling me about the issue. Also two days after he worked on the unit it blew out all of the Freon and now does not work at all . Not very happy about this outcome.

Sales representative and installation personnel were personable and professional throughout. They arrived and the promised time and completed the job as promised. Courteous, focused and considerate the entire time, e.g. wearing "booties" whenever working inside; cleaning up the work area; calling in an additional worker to ensure the job was completed in the promised time.

I was in the hospital for around a year, and one of the things needing taken care of during that time was the maintenance of the A/C system. We bought the deal because it included the refrigerant, but when the service people met my wife for the appointment, they charged her another $100 to add the refrigerant. It was supposed to have been included, but they charged us for it anyway.

Description of Work
We bought an offer for A/C tune-up with up to 1 pound of refrigerant.

Have used Legacy for two years. I have found that there is a big difference in the thoroughness of their technicians. This one spent minimal time in determining whether my boiler needed a thorough cleaning. Another heating company told me that it did. Legacy man said it wasn't too bad and did not recommend cleaning.

Thank you for posting, however, our history with you is showing the last date we were at your home was 11/30/2015. At this time we advised a cleaning for your boiler and a moisture barrier. The quote was emailed to your contractor. If your service was on the completed date shown in January of 2016, it must have been a different company. Please contact us if we can be of any further help.
5.0

Scheduling of the appointment was easy. I got a reminder phone call the day before and a courtesy call before the technician showed up. The technician was very prompt.

He arrived on-time and answered all my questions.

Billy, co-owner, was professional in providing quote and worked with corporation to lower our total cost. He identified a need for added return vents and that was part of quote. Install was professional and timely. Billy met with me after install to assure satisfaction and deliver warranty paper work.

Service technician was thorough and patient, checking multiple possible problems to resolve the issue and did not recommend a replacement of the furnace, which worked fine once he resolved the ignition problem.

Description of Work
Checked an ignition problem on our furnace and repaired a sensor and pilot light issue.

Called 10am, and was advised they would have a technician same day and would call before arrival. Got the call at my office and went to meet technician. Technician (Charlie) arrived promptly at the time I was told. He was friendly and appeared very clean and explained what he was going to do and asked if I had questions. He diagnosed the system and I was pleased to find it only needed a new capacitor. He replaced the capacitor and tested the system and gave me some good advice on how to help the efficiency and how to clean the coils. I was very pleased and will definitely be using Legacy in the future.

Two men arrived around 9am on Thursday. In a couple hours, they had the old equipment removed. Around one a second crew arrived and by mid-afternoon they had the new equipment installed but the thermostat wouldn't recognize the furnace. By 5:30, they left for the day. The weather was cooperative and the lead guy said they would have stayed later had we needed the air conditioning that night. Two of the men from Thursday arrived a little after 9am on Friday after stopping by the supply shop for a different thermostat. They tried a number of things and finally figured out that the thermostat was not compatible with the system installed. They left for about an hour returning with a different thermostat model that worked perfectly. Then they tested both the furnace and A/C. They explained the thermostat operation and humidifyer maintenance. It's been working fine since.

Legacy did a great job. We would recommend then to everybody.

The service was optimal without issues. Overall I would use Legacy again in the future. Keep up the good work!

Carpet and Upholstery Cleaning, Tile and Grout and Air Duct Cleaning. We guarantee your satisfaction and we won’t leave until the job is done right. We pride ourselves on the quality work we provide, while delivering great customer service! Check out our services offered and call or click to schedule a free estimate today.  …

Petersen Brothers Contracting is your one-stop shop for home improvement, plumbing, and HVAC services. We are a merger of three separate companies with track records of providing reliable technicians and completing high-quality work. Our industry professionals have years of experience in their craft and can complete many jobs including installing or repairing plumbing, replacing or repairing heating or air conditioning systems, or remodeling and renovating your home. We will help you find the best solution to your home improvement and maintenance needs. We are fully-bonded and insured, and ready to help you with your home needs today! PC11400054  …

Legacy Heating & Air Conditioning is currently rated 4.8 overall out of 5.

No, Legacy Heating & Air Conditioning does not offer eco-friendly accreditations.

No, Legacy Heating & Air Conditioning does not offer a senior discount.

No, Legacy Heating & Air Conditioning does not offer warranties.