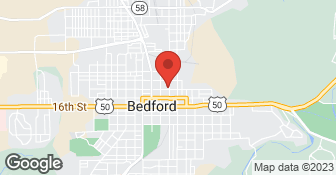 Deckard Construction provides 12 years of dependable service to Lawrence County and the surrounding area. We provide free estimate and stand behind our work "We are not finished until you are completely satisfied". No job is to big or small!...

Family owned and operated business in your local area. Offering superior service at a fair price. We can complete almost any HVAC problem or project you have. Call us today for a free estimate. Military, Fire Department and Police Department discount of 10% off.  …

Promised to show but didn't. No call, no nothing. Terrible way to run a business.

Description of Work
Provided quote for flooring. Estimate included black mold. Requested 70% down. When workers arrived they did not provide the service according to the estimate. Black mode was never disposed of properly. SP refuses to contact Member upon the service and is very rude.

They came in immediately and quickly performed the job. I was very pleased on how well they did the jobs.

the owner and his wife were rude and uncaring. they had million dollar jobs they didn't need my piddly little job. the agreement was that I would supply flooring and subway tile for the shower surround. when I emailed manager to see how much of each I would need she was extremely rude. husband/owner called and informed me that they could be as rude as they wanted they didn't need my money. I needed this done and they were the only ones who could do it at the time. so I shut up and let them proceed. they had a bad habit of telling me I had talked to whomever and agreed to whatever when I would call, mostly about the a.c. I called for an estimate on the water heater not lighting, gas, they set up time for Saturday, never telling me it was emergency repair costs. their employee came on a Saturday and fixed it without estimate. they charged me 280.00 gave me a promotional discount of 160. charged me a final bill of 120.00. 100 for labor and 20 for part. they later told me I had talked to owner and agreed to emergency payment. never spoke to him and I could have bought a tankless water heater for 250.00 plus I was taking showers elsewhere so didn't and wouldn't agree to emergency pay the employee who did all the work was wonderful though. he knew how excited I was to get this done and move in. he was extremely nice and explained things as he went. the bathroom is wonderful. he has come back several times to correct a small problem and is still friendly. all the workers I met during the rebuild have been nice and knowledgeable. From: Deckard Construction LLC <sheila.deckardconstruction@gmail.com> To: Sandra Clore <missjane3355@aol.com> Sent: Mon, Jun 29, 2015 10:49 am Subject: Re: Homeadvisors. YOU NEED TO GET 100 sg ft of material because tiles have to be cut and trimmed. etc. Confusion like this is why we prefer to provide materials because we have the knowledge and experience to make sure we have enough and the right material selected and provided. On Mon, Jun 29, 2015 at 10:47 AM, Sandra Clore &lt;missjane3355@aol.com&gt; wrote: for just the bathroom floor? he said it was an 8x8

Description of Work
rebuilt bathroom from ground up. changed ducting and painted ducts from a.c. water and sewage through-out the house

It went very well and the price range was very reasonable. I would definitely use them again.

Description of Work
They came out and gave me a free estimate. The office manager sent me an estimate for the job to be done online. We set up a time and they came exactly on time. They did the job exactly and I paid them and everything went perfectly.

Everything associated with your home.