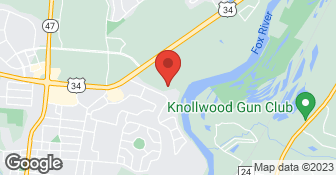 Valley Chimney is a small, family-owned chimney service company that has served over 21,000 chimneys since its inception in 1978. Our clients are located in the Chicagoland far west suburbs and receive quality services from only Certified Chimney Sweeps tm. We offer a wide range of professional chimney services. For well over 35 years, our primary company focus is to make residential chimneys safer to use. With constantly updated skills, techniques and the latest equipment, our goal is to reduce chimney fire hazards and be your Chimney Sweep for Life....

This review for Valley Chimney Sweep is two parts. The first is the chimney inspection. They were the least expensive in my area at 100 dollars. They came out on time, two professional gentlemen looked at my main chimney, inspected the cap on top of the roof, said it was good and was gone in about 20 minutes. No complaints there. However, they and the dispatcher had been told that I was having a backsplash issue with my hot water heater. This means there is evidence of natural gas exhaust fumes not going up the feeder pipe to the main chimney exhaust. Simply put, I had called them because of that and one of the worries was there was something caught in the chimney or pipes somewhere. Later when I had JustinTime come out they checked my pipes coming out of my furnace and hot water heater to the Y joint they found a tremendous amount of dirt and sand in the hot water exhaust pipe that was nearly completely blocking all of the exhaust fumes. When they removed the pipe that is attached to the furnace there was over 2 inches of rust particules in the outgoing pipe coming right from the furnace. I called just to let them know what I found and asked Annette, the person at VCS, what was their procedure about which pipes were to be checked during my 20 minute inspection, which again was 100 dollars. I made it a point to try to be polite when I called. About 5 minutes later a man called me back from VCS, somewhat hostile and explained to me that Valley Chimney Sweep inspects chimneys, not furnace pipes. If that is so, then I feel they deserve a good review as they looked up my main furnace chimney past the Y joint, saw it was clear, took my check and left. If they should have also removed my connecting pipe from the furnace or hot water heater to the Y joint after having me explain there was a backsplash then they did a poor job as a five minute removal and visual would have noticed these major obstructions. What I would recommed is that if you have having ANY furnace or hot water heater trouble, please first take to an actual furnace place like JustInTime, and only if they cannot see an issue with your pipes in the basement, then call a Chimney Sweep place, especially if you have new construction.

Did a great job. Easy to work with.

Description of Work
Repair to boards underneath fireplace

Great. On the spot estimate. Delivered and installed faster than promised. Very responsive to my call about an issue; came out the next day.

technician and helper were punctual, courteous and performed the work quickly and cleanly; they cleaned and inspected a full mason fireplace; they answered a few questions about the work they did; very satisfied; will hire again

It looks beautiful & works perfect we will tell everyone we know what a great job they did and will be using valley chimney sweep yearly to clean our chimney.

Description of Work
Terry & crew completely installed a wood stove for us. They did a wonderful job & completed it quickly. Then Terry D. showed us how to make a fire & taught us all we need to know.

All was very good especially responsiveness. Since they were in the area anyway and the job took about 20 minutes, cost seemed somewhat high! Would definitely use them again though!

Description of Work
They installed a new stainless chimney cap.

Excellent. The owner was fabulous to deal with. The guys who came in to look at the chimney and fireplace and make sure everything was okay also checked out my logs and helped me replace some of the fiberglass bits. The cap looks great, no leaks, and I'm very satisfied with their work. I would use them again, no question.

Description of Work
I discovered that when the snow was melting in January, that our chimney cap was leaking and dripping into our chimney. We have a metal chimney with a gas fireplace. They came out, took measurements, and even checked out my chimney and fireplace. I purchased a chimney cap 15 years ago for just over $500, so I did not find their estimate of $660 unreasonable. Since it is custom made to fit my chimney, they came back two weeks later and installed it when it was ready.

Thanks for taking the time to post a review of our chimney service. Hope it solved your leak issue. I know it looks much better up there now. I will pass on your review to Lee and crew. Terry
5.0

Phenomenal! They are SO THOROUGH and informative! Maybe not the cheapest, but worth it for peace of mind!

Description of Work
Cleaned my chimney and replaced caps

Thanks very much for taking the time to review our fireplace services, we appreciate it. Terry
5.0

They were prompt and efficient.

Description of Work
They installed a new chimney chase and cleaned the dryer vent line.

WOW, Thanks so much for the review. Lots of clients say they will review our services but never seem to have the time to follow through.We do appreciate your taking the time to do it.i know your dryer should work up to specs now. I will tell lee and Phil that you are happy with our service in Aurora. Terry
5.0

Fantastic service by Terry and his team. I have a wood burning/gas fireplace that needed cleaning and to check for animals that I had heard near the chimney. They did a thorough cleaning (and kept the house clean while doing it!) and found no evidence of animal activity. Terry showed me that the previous owners had tapped into the gas line incorrectly and had used copper pipe for the gas to the fireplace. They removed (at my request) all gas components and the fireplace is now safe and set for wood burning (I can have it changed back to gas in a safe manner later). I'm very grateful that they found and fixed the possibly dangerous situation and did a wonderful job on everything else. I highly recommend Valley Chimney!

Description of Work
Cleaned the chimney, checked for animal activity and disconnected and cleaned out the old gas components.

Thanks very much for taking your time to review our recent visit. Enjoy the fireplace, Terry.

Dryer Vent Wizard of Will County

We are a family-run business that puts family values at the forefront of everything, ensuring you and your family have a clean environment and healthy air. We offer a full air duct cleaning service with unlimited vents, as well as, dryer vent cleaning.  …

Valley Chimney Sweep & Restoration is currently rated 4.9 overall out of 5.

No, Valley Chimney Sweep & Restoration does not offer a senior discount.

No, Valley Chimney Sweep & Restoration does not offer warranties.