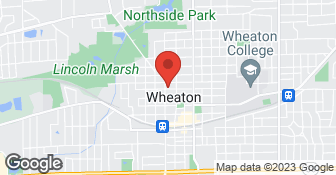 We are capable to handle any wiring problem with ease when you turn to Adrian Electric Inc. electrical contractors in Wheaton, Glen Ellyn. At Adrian Electric, our electricians have 40 years of experience in residential and commercial generators and electrical service and installation, providing us with a wealth of knowledge and expertise in repairs, services, and upgrades.

Frank was incredible, timely, and efficient. The communication was excellent and the project was completed at an earlier time than expected. This was a previous debacle of a job that put me into a panic for months (preparation work for raising ComEd wire 11 feet above my new deck that required going through the attic and roof of my house) that a previous company left me dangling in (stuck in between ComEd and our village inspector). Frank and his employees kept me at ease and took care of the issue right away with compassion, professionalism and didn’t break the bank. I am so grateful for Adrian Electric and will recommend this company to anyone and everyone I know! Thank you Frank!!!!!!!! Wendee Goles Villa Park

Description of Work
Preparation for a ComEd job

I am not great at working with service contractors, but Frank Adrian from Adrian Electric made the process easy. He is willing to listen to your concerns and work with you to reach a decision on how to best accomplish your intended objective. He also makes the effort to work with your schedule. He does not rush into anything, and knows how to make the job flow smoothly. The best part is, even though I know he's busy, he is accessible and always gets back to me within a reasonable amount of time. If I don't hear back that day, by the next day he will return my call. His quote was reasonable, and everything came out just the way I wanted. I highly recommend him for your electrical needs.

The quality of Frank Adrian's electrical work was excellent, and he was always very pleasant to converse with over the phone, but his communications were highly erratic. He started out splendidly, which is why I chose his proposal from among the others I solicited. His proposal was very detailed and professional, typed up with explicit references to all the points on the Village inspection. His rates were on the lower side. He was prompt to return my phone calls and emails. And he said he would be sure to meet with the Village inspector at the re-inspection. Once I hired him, though, things deteriorated. He didn't respond to my questions until I had pursued him every time with several emails and phone messages. He didn't do the work on the weekend he promised because he said he didn't have a document he needed from the Village -- but he told me this only after I contacted him to ask whether he had in fact completed the work. He quickly performed a few more tasks I added on to the original proposal, but he didn't send me the revised invoice despite my follow-up request. The house sold quickly, and the lack of his final invoice caused a problem at the closing. On the plus side, the quality of the work was excellent. He did meet with the inspector, and the house passed re-inspection. He went back to the house on trash pickup day to make sure the bins were put out front. So in the end I got the quality of work I needed, at a good financial price. The extra cost was delay, hassle, and worry.

Description of Work
I needed a lot electrical work on my late mother's house to bring it up to code so I could have a compliance certificate for prospective buyers. The home was a 1950s ranch house suffering from seriously deferred maintenance. Complicating the situation was that I live 300 miles away from the house. Adrian Electric performed the following: - installed globe-type fixtures in closets - installed single dedicated outlets for pumps - upgraded service to legal 100amps - upgraded circuit breaker panel - upgraded outside service with proper grounding and copper wire - all outlets upgraded to three-prong grounded type and GFCI-protected - installed new outlets to eliminate strings of extension cords - pulled out huge amounts of out-of-code Romex wiring and installed cover plates over the openings - removed broken lamppost in backyard - installed new battery for thermostat

Lots to say about Adrian Electrical beyond being a truly stand-up contractor. I'll start with how quickly Frank responded to my call, and his assistant John came out that same day. John came by and looked at multiple issues that we have (I mean HAD!) inside and outside, big and small. These guys are the fourth contract electricians we've used over the last three years, and they're the only ones who not only figured out the problem with the lighting and electrical problems we've had with our outdoor bar, and had it identified and fixed within an hour. Then fixed two small issues within another 10 minutes. They don't nickle and dime, and they don't mess around when it comes to finding and fixing problems. The other contractors either didn't fix the problem, mis-diagnosed the problem, or never returned my calls for a follow-up visit. I don't care to share how much time and money we have wasted, but I can say that I HAVE FINALLY FOUND MY ELECTRICIANS. Now if I could just find a plumber and carpenter.

Description of Work
Trouble shooting and fixing major outdoor electrical and lighting issues that have not been solved by three other contractors over the last 3 years.

Problem was not fixed and Frank created more problems electrically in our home.

Description of Work
We had a HWA call to this company. Our electrical box needed to be fixed. Instead they just put screws and plastic over open areas of electrical switches. They also made our heater not work in solarium. They would not stand up for what was rightfully needed to be fixed and scammed us out of getting our box really fixed under the warranty. Five minutes of their time for $100.00 service call fee. What a waste!

Who is this? Adrian Electric has never worked as a contractor for HWA Home Warranty Of America? Why did [Member Name Removed] ??? Post this?? Frank Adrian Owner

Tri-State Water, Power & Air has been provided products designed to improve the comfort and quality of life of our customers since 1992. Our specialties include Automatic Home Standby Generators, Residential Water Treatment Equipment, Plumbing and Water Heater installation and service, Safe Rooms, Solar and Battery Power. We expect customer service excellence and aim to go above and beyond on every call. With 9 locations across 8 states, Tri-State is always ready to serve you.  …

We offer both residential and commercial services, but we specialize in residential New construction and additions. We can do everything from brainstorming your custom design to handing you the key to your new-and-improved home. We'll give you blueprint drawings upon request and take on a project from ground up!  …

Adrian Electrical Inc is currently rated 4 overall out of 5.

No, Adrian Electrical Inc does not offer eco-friendly accreditations.