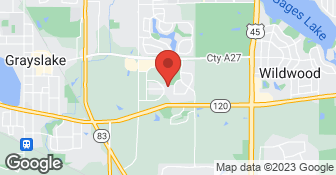 Responsive, efficient, and effective professional services setting the bar high for excellence. We provide residential asphalt paving, brick paving, and concrete paving services to the Northern Illinois suburbs and some of North Chicagoland.  …

For over a decade, Bald Eagle Construction has been widely known as the go-to expert for a wide variety of construction projects in Chicago and the Chicagoland area. We’re also proud to be the leader in handling City of Chicago building code violations. From taking care of fixing the issues straight through to dealing with the paperwork. For you that means you not only get the job done to our exacting specifications – you’ll also be assured that any project we start will comply fully with all Chicago Building Department regulations. 11 employees. Uses subs for specialty work. Cost is determined by the job. No travel charges. Ask about Angie's list discount. Award winning.  …

CSSI is a women owned, family operated business. We have trained professional staff to provide all Your property maintenance and construction needs. One-stop-shop, reliable service! Call now for your free property quote 773-254-6500  …

Initially OK but after one winter, it had 42 little holes. He blamed it on the cement and even when we hired a lawyer, he did nothing. NEVER consider calling him!

After one season, we found 42 small to medium sized holes in the concrete. We called Mr. Prescher from Seabrooks and eventually he called back. After checking with the Village of Northbrook and having told Mr. Prescher that he poured concrete when it was too hot, as well as not sealing it, we finally contacted a lawyer and had a lack of response. This went on for months with back and forth "promises" to redo the driveway. Today, he came with an Indemnity Agreement, 9 pages long, and the lawyer said we should NOT sign it! He said it was just swapping one problem for a potentially worse problem. If Seabrooks ever gives you an estimate, do NOT use him!

Description of Work
Took out and pored a new driveway