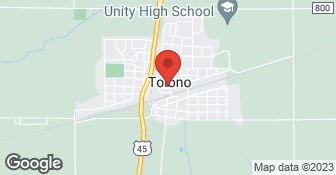 Mark and his wife Bonnie started Eagle Head Enterprise in 1977 as a full line appliance sales and service store. Today we specialize in Service. We are factory trained and authorized for many brands, and offer a competative flat rate fee for our services....

Waited all day. Suppose to be here between 8 and 4. No call. No show. When you call the number it goes to a busy signal

In fall 2016 we replaced our 30-year-old refrigerator with a new energy-efficient LG model with top performance ratings. All was well for eighteen months, but on May 9, 2018, food in the freezer compartment started to thaw. LG asked us to contact their local authorized service representative Eagle Head Enterprises. A nice guy from Eagle came on May 14 and diagnosed compressor failure. (This was the service performed.) Installation was scheduled for nine days later. So far, so good. On installation day, May 22, Eagle Head did not show up; they didn't call; they didn't answer the phone. The following morning they apologized, but rescheduled not for the next day, but for eight days after that. On May 29 Eagle repairman number two arrived. After forty minutes, he told me he couldn’t fix the unit, that it would be "dangerous, a liability." He said he doesn’t call LG, that I should call to see what to do next. I called LG, but they said of course that they had to talk to Eagle. After they got hold of him, they switched me to their second representative which was an hour away in Bloomington. Those guys were able to replace the compressor and restore function. However, we had three weeks without a fridge waiting on Eagle Head Enterprises.

Once the problem was diagnosed, no one called to give me a quote on the new drier drum. The office lady was very unprofessional over the phone when I called.

Description of Work
I received a new drum for our drier.

Great. Very nice technician came exactly on time and fixed it. A bit pricy ($125 flat fee for coming out, clearly stated and agreed on ahead of time) considering the problem turned out to be minor and easily and quickly fixed, but worth it overall as I felt I was in very expert and trustworthy hands. That was over a month ago and the dryer has been working well ever since. I would definitely use them again and highly recommend them for their expertise and professionalism.

Description of Work
Dryer was not working

It went very well. Not only did he clean out all the lint in the dryer, he cleared the vent AND was able to attach the unit to the wall much better than it had been. I was very happy with the service and professionalism and will certainly use this company again.

Description of Work
The provider found the cause of a burning smell in my dryer .... had to do with improper venting ....

Description of Work
They fixed my refrigerator.

I would recommend this company for their great service and friendliness. My washer was fixed after a part was ordered within a few days.

Description of Work
Fixed my washing machine, came out the afternoon I called.

Dealing with Eagle Head Enterprises turned out to be a wonderful and easy experience! Bonnie was very helpful and informative when I scheduled the appointment, and Mark was not only very professional but was also quite personable. It was obvious to me that Mark is highly qualified and performs quality work. He even took the time to explain exactly what the problem was. I was so impressed that I made an appointment for him to come back next week to fix another problem!

Description of Work
My old washing machine would not spin, but Mark identified the problem in a matter of seconds and fixed it so it's good as new!

This is the second time I've used Eagle Head for appliance repair. The first time they came to fix my dryer. It needed a new heating element. The repairman explained exactly what was wrong, and he showed me the broken part. He replaced the part immediately (he had one in his van) and charged me a fair price. So when the power went out on my dishwasher, I called Eagle Head again. They set up an appointment for the next day, but then called soon afterward to tell me that a repairman was in my area now. He had extra time from completing another job early and could be at my house in twenty minutes. After a few minutes of examining the dishwasher, the repairman correctly identified a loose connection to the power supply underneath. Again, he had a replacement part in the van. So he was able to fix everything in no time. I would definitely call Eagle Head again.

Description of Work
Fixed my dishwasher.

Very professional, punctual and cost effective. The issues were explained to me well. I was very anxious to have someone come to check out the issues and they were able to come the next day, which was wonderful. I had just moved to the area, and had only been in my house a few weeks so I was hesitant to call someone in, but I'm very glad I did!

Description of Work
Checked out malfunctioning dryer and dishwasher.

Eagle Head Enterprises provides in home repair solutions for all major home appliances. This includes stoves, ranges, microwave ovens, and venting equipment in the cooking area, as well as refrigerators, freezers, window airconditioners, and all laundry equipment such as front load and top load washers and dryers. We service most major brands.

In most cases we do not offer carry-in repairs.