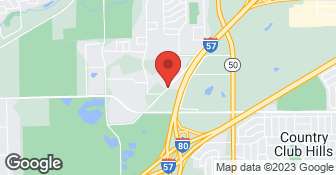 Since 1979, Air-ease is Tinley Park Illinois area's only specialized Geothermal WaterFurnace Dealer/Installer as well as Mitsubishi City Multi Diamond Designer. We are factory trained and IGSHPA certified to design and install. We further specialize in radiant heat and snow melt. If you are looking to save money on energy bills while preserving the earth, consider Air-ease for your next project....

At Mr. Heating and Cooling INC. quality, competitive pricing and excellent service has been our #1 priority for over 14 years. We are an authorized factory dealer for TRANE products and can service all name brands. Servicing the Chicagoland area for all your HVAC needs in both residential and commercial. Mr. Heating and Cooling INC. has the tools, the people, and the products to provide a system that fits your lifestyle and budget. FREE in home estimates and 24 hour 7 day emergency service.  …

Chicagoland Heating & Air-Conditioning, Inc. was started by Robert C. Landwehr in February, 1961 on 79th Street in Chicago. In 1962 he became a Carrier furnace and air-conditioning stocking dealer, making Chicagoland the second oldest Carrier Dealer in the area. His son, Robert J. “Skip” Landwehr, worked at his father’s side beginning in 1970. The company has grown from a two vehicle fleet in 1961 to the present 14 vehicle fleet. Our company is regarded as one of the best in the area and is also one of the top volume dealers on the Southside. Earned The Trust Of Over 100,000 Customers All of our technicians have many years experience behind them, which has led to our A+ rating with the Better Business Bureau, and being the winner of Carrier’s highest award for excellence in service, the “President’s Award”. We have attained this award for 2010, 2011, and 2012. Why Choose Us? We have the skills and experience to solve any heating and/or air-conditioning problems. We are fully licensed and ready to provide you with your HVAC solutions. With a wide variety of products, let Chicagoland customize a solution that is best for you. We are prepared to help you with sales, service and installation. Therefore, we can provide you with a comfort system that is ideal for you. In addition, Chicagoland’s technicians are able to make repairs on all makes and models. With Chicagoland Heating, you can expect comfort and value.  …

Air Source 1 is a local family owned business and we've been around since 2014. We provide repair, maintenance, and replacement for: Furnaces, Air Conditioners, Duct Work, Hot Water Heaters and Boilers. Give us a call anytime, day or night! We accept all major credit cards, financing available, $60 Service Call, Free Estimates, Free 2nd Opinions.  …

It went really well. They were done in half of a day.

Description of Work
They installed an indirect water heater.

Thank you for your business. We appreciate and value our customers.
5.0

Bob and Carl arrived on time. It took approximately 8 hours to complete the job. They were neat and careful both bringing in the new equipment and taking out the old. They had to disconnect and reconnect the old humidifier. We haven't yet been able to check the air conditioner because of the outside temperature, the furnace seems to be working well.

Thank you for being a long time customer. We appreciate your business.
1.0

couldn't just give him the OK to start a job with no idea of how much it would cost me. We settled at 4 hrs, he left saying he had to go get a special tool, but left his worker there to do as much as he could until he got back, I overheard shortly after on their Nextels - he was getting coffee, gas and stopping by another job site before returning. Didn't bother me until at the end there was an additional charge for 1.5 hrs for Bob's time there on the site. Denise told me was for his expertise & time at the site telling the worker what to do (a couple of times they didn't agree, & Bob got loud with his worker, but that wasn't my business) as I told Denise I feel the 1.5 hr was unfair, he may have been here 45 mins & it wasn't disclosed. This was supposed to be an estimate. Instead I paid $400 to have them removed, along with a broken valve and no new radiators installed. I also don't feel good that I had to put 100.00 on my credit card to pay a portion of the 1.5 hr for Bob's time.

Description of Work
Remove and install new base board radiators. My 1st contact was late Aug with Denise, she was very pleasant, I thoroughly explained what I needed - how I wanted to stay with the same system, and just wanted the old radiators removed and new ones installed. SD owner Bob was very knowledgeable about Base Rays -- this is the reason I decided to have them come out for an estimate. Well Bob totally missed our first appt. and didn't call. Denise apologized for him and we made another attempt but he didn't come than either. Dec. I tried again- as there aren't many companies that I could find that would work with Base Ray's. Mostly everyone wanted to replace my system with forced air or copper radiators. Bob did come out on our third appt.- instead of giving me an estimate he decided he would do the job that day, I was quoted $80/hour instead of a by the job rate-- I asked about what I saw on Angie's List profile, said unable to determine a time to do the job - I advised Bob then I (below)

There was more repair/replacement than the customer wanted to have done or could afford. So Air-ease attempted to do the minimum amount of repair to get her system in operation. More work is required.
5.0

GREAT PEOPLE WITH EXCELLENT CUSTOMER SKILLS. THEY REALLY CARE ABOUT KEEPING THEIR CUSTOMERS HAPPY (AND WARM AND COOL!)

Description of Work
THIS COVERS A PREPAID MAINTENANCE AGREEMENT GOOD FOR FALL AND SPRING CLEANING AND CHECK OF SYSTEM. ALSO INCLUDES CHECK AND CLEANING OF ATTACHED HUMIDIFIER. THE AGREEMENT ALSO PROVIDES 10% OFF PARTS AND SERVICE CALL PRIORITY.

Thank you for all the years of your business.

Air-ease is a diversified heating, cooling, refrigeration and sheet metal contractor. Time for a new furnace, boiler, heat pump or air conditioner? Need repair service now? Ready to go green with geothermal? Whatever your indoor comfort needs are, either residential or commercial, we have state of the art equipment with qualified factory trained technicians to meet those needs. Air-ease can reduce your heating, cooling and hot water costs. Start saving money and energy today.