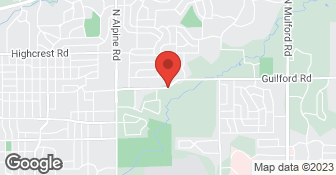 With 15 years of experience, Ayala The Paintman Services works hard to bring each customer the best possible service and quality available. We look forward to working with you on your next project. We welcome your questions and thank you for your interest....

OFFERED BY
Ayala the Paintman Services …
5.0

OFFERED BY
Ayala the Paintman Services …
5.0

They did an awesome job I posted pictures on Facebook and my friends all loved the new paint job, especially the red door!

They were punctual, efficient and did an excellent job.

Pablo and his crew were very easy to work with. They were super fast and very professional. They did everything I asked for and did it very well. I have other jobs for him to do and look forward to hiring him again.

Pablo was so professional and so kind. He was able to finish the project within three days and it gave us plenty of time to get moved in. The work done was so beautiful and he was so respectful of the house. I loved that I could trust him and his coworkers to be in our house and lock up every night. Pablo would also call me every night and to let us know he was done for the day and that the house was locked. He was also so flexible when I added a few extra rooms - the price was also very fair. Will definitely hire again.

He came over and later sent us an estimate. I said that the estimate was fine after noting there was one less window frame, but no big deal. He was to call in two weeks with an exact start date by Sept 29th. I confirmed that twice, to be sure. He never called by the 29th-or after. He did not answer my call about 10 days past the 29th. I texted him once that he was not professional. My husband and I had to do what we could ourselves, as cold weather was coming. It was infuriating because we lost a lot of good painting weather in October. TG no money was paid up front.

Description of Work
Sanding and Painting. Certain parts of Exterior Porch and 5 small window trim painting. Side door and Back door trim.

Excellent. They were wonderful. Such attention to detail, so neat and clean.

Description of Work
Exterior of house and gsrage

They were able to start the job a week after I contacted them and finished it in a day. My ceilings look great!

The painting went very well. Pablo was very kind, and helped us so much. He is knowledgeable about paint and pointed out a few things about the paint I chose which helped me. He arrived on time and always kept us up to date with what he was doing.....And he did a great job. He cleaned up after himself. We were extremely happy with him. I would be honored to recommend him to my friends!!