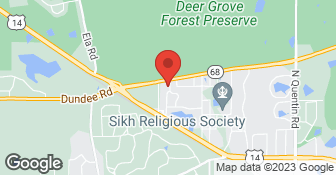 Established in 1978, Peterson Roofing is a full service exterior company that has been proudly serving the Chicagoland area and Northwest suburbs since 1978. Whether it is a small repair or a complete replacement project, Peterson Professionals have the experience to meet your exterior needs. We have dedicated and experienced crews that specialize in roofing, siding, gutters, preventive maintenance, attic insulation, masonry and more. Our crews are continually trained in-house in our training facility to keep up-to-date with all OSHA regulations and installation procedures. Give us a call today and see for yourself the difference a Peterson Professional makes. Having trouble selecting materials or colors? Come visit our design center and have a Peterson Professional help you select the right materials for you. Peterson Roofing has 30 Employees. Cost is determined by the job. No extra charge for after hours service. LICENSE NUMBER: 104-002674.  …

Roof deck had rotted and plywood was delaminating until it was unsafe to walk on and moister had begun to appear in attic space. Larry and his crew did a fine job over two days replacing the roof deck/shingles adding a ridge vent to eliminate future issues with mold and inadequate tactic ventilation. Overall experience was great - the only area of improvement would be to get after it on clean up and damage to yard and plants. But...would use again and recommend to anyone needing a roof!

Larry and his team did an exceptional job.

Larry came out and gave us a fair quote for the job that needed to be done. He showed up as scheduled and the work was performed as promised. His crew was professional, friendly, and cleaned up the site thoroughly. I definitely recommend him for the job.

There seems to be the practice on Angies List of giving anyone who does a decent job an 'A'; I rarely feel like giving out 'A's. But Larry Gustafson and my new roofs most definitely deserve an 'A'. I found Larry to be super-likable, easy to talk to and very honest. The main reason we were getting a new roof was bc raccoons had gotten into my lower attic twice over the fall/winter. He had the idea of putting 4 feet of sheet metal all around the edges of my lower roof, so future raccoons still may be able to pull up shingles but they will have a much tougher time getting into lower attic. He also gave me a new attic fan, replaced the vents and added a new ridge vent to the upper roof. Even with all these, he was still more than a grand cheaper then either of my other estimates. What they other reviewers say is true- Larry is up on the roof with his crew working/supervising and doing the more important tasks e.g. flashings, vents. He and his guys finished the work a couple of months ago and I have seen zero leaks or problems despite having had plenty of rain.

He was very communicative and did a great job!

Exceptionally good job. Went the extra mile and did an excellent job.

Description of Work
New roof with tear off

Lawrence came over and did a visual inspection with the owner present. He then provided a verbal estimate and followed up with a detailed written estimate for the work. A large crew came as scheduled. My ranch house took three days to complete. Everything about the experience was professional. I would not hesitate to hire Lawrence again.

Larry was great. So easy to work with and completed job well and did a great job of clean up.

Description of Work
Installed new roof according to code.

Larry was very responsive, showing up within a day of my original message. When he arrived and got on the roof, he immediately assessed the scope of the repair was greater than originally estimate made from the ground. Based on that new scope, he arranged to return with needed supplies in 2 days. He showed up in 2 days and completed the repairs as specified. His team was efficient, professional, and neat - nothing was left behind.

Description of Work
Larry repaired a section of roof.