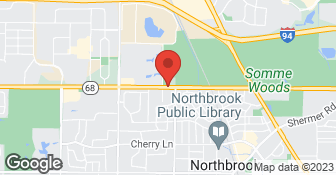 Highland Park Appliance Repair, 847.984.9179 has serviced and neighboring areas for more than 17 years. We aim to be the best appliance repair service. Our goal is to provide high quality repair services and after service. We service all kinds of appliances of all brands.

Description of Work
I was told that a technician would arrive between 11 and 2; Jim arrived at 11:00. He wore a big smile, and he worked quickly and diligently. He did a proper job of the repair.

Contrary to my earlier recommendation of this outfit for some great work done by one repairman on our Sub-Zero freezer, which is why I chose it to work on our GE oven broiler, the service here was terrible. A different repairman, described by the service as having 25 years of experience with GE ovens, fiddled around with some wires for up to an hour (including about 1/2 hour in his truck) and did get the broiler working. He charged me $168.50 (and insisted a check rather than the credit card which his company had accepted previously and which it advertises as acceptable on its website). On the invoice, he wrote "1 year warranty on work done". When we turned on the first time after he left (3 days later), it worked for about five minutes and then failed again. The same repairperson returned, fiddled with wires for about five minutes, and then claimed he had to call a wiring "expert" and it would cost much more to repair. He wouldn't commit to when the "expert" would come, or what he was likely to charge. I asked for the return of my $168.50, and he laughed and said "it was working when I left." In subsequent discussions the repairman became profane and abusive. I have complained to the company, asking for my money back, but so far to no avail. I now see why he insisted on a check - I could have had my credit card company challenge the payment, but the check was cashed quickly, before I could stop payment. I do intend to pursue other remedies, but did not want my earlier recommendation to cause others to be exposed to the same terrible service.

It did not go, after the rude woman I would not give them $59.00 for a "service call" ever. They lost me before they had a chance.

Description of Work
Nothing. I did not get past the rude woman on the line.

Description of Work
Took a look at our refrigerator as we thought there was a short, but he advises us that it was fine and that the short was coming from the GSI outlet, opposite of what the electrician who came out and charged us $185 for nothing

They were able to get me an appointment within 24 hours and when the problem was not something obvious, the repairman kept digging until he found the problem. He had the necessary parts in his truck and the problem was fixed within 40 minutes. Serviceman was professional, respectful, knowledgable and kind.

Got tied up in another job so arrived late but worked late into the evening which fit our schedule. Prompt and professional.

Description of Work
Fixed our dishwasher

I have been using Highland Park Appliances for around 20 years. I can count on dependable affordable service. The repairmen seem to love what they do. They also seem extremely knowledgable. I particularly appreciate the Saturday hours. This is the one service provider that I consistently rely upon.

Description of Work
He fixed my dryer so that it would heat.

Description of Work
assessed my clothes washer and fixed drain.

We had ordered a drain hose from Maytag but then realized that the washing machine cabinet needed to be removed to replace the hose so we called in the repair man. He arrived at the specified time and was very friendly and personable. We were a little concerned with how rough he was (banged the machine against the cabinetry pulling it out, springing the storm door going in and out) but the only real damage was to himself (he ended up cutting a finger and bleeding profusely). The actual repair was quite satisfactory if not exactly elegant (the hose is quite visible over the top of the washer and shows through the front window -- which the original hose didn't -- but that is a function of the existing plumbing and the changes in requirements (anti-siphoning) since the plumbing was installed.

Description of Work
The washing machine drain hose needed replacing (old one had sprung a leak).

We had had HP Appliance Repair in to work on our dishwasher several years ago, long before we ever joined Angie's List. They did a good job then (the dishwasher is still humming along and its pretty old..), so they were the first folks we thought of when the oven went on the fritz. They sent a courtly, polite gentleman to look at our oven on 11/22. He was on time and very professional. He rattled around in there for about 45 minutes and then called me out to explain that the motor that controls the self clean oven safety locking mechanism was kaput and that a new one would probably run in excess of $250, if a replacement motor could even be found. So, he advised against doing all that. In the meantime, he had unlocked the oven so we could use it, of course. Then he told me that with the exception of this motor issue, the oven was in fine shape and that he could fix the fan and display issues with about another hour's labor and once fixed, the thing should give us many more years of good service. We just had to remember to never push the self-cleaning button...:) Because that would lock it again... So, I told him to go ahead and he fixed everything exactly as he said he would. Very courteous and genuinely interested in satisfying our needs for the least amount of labor. About 3 days after he was done, the display started coming and going again, but I don't hold that against him. The oven is old and the display works 95% of the time now, up from about 30% before he worked on it. And the cooling fan barely whispers now, where before he worked on it, it squealed like a banshee much of the time. I'd call this a very satisfactory repair experience. They are nice folks, were punctual, professional and obviously eager to do a good job and did not try and sell us parts or services we did not clearly need. We'd have them back to work on another appliance without hesitation. The only even remotely negative thing I'd say is that I thought the overall bill of $254 was just a hair steep. But then again, what do I know about pricing in this field and what is usual, reasonable and customary? It's not like we have an oven fixed every week... Maybe he was actually low, who knows? The bottom line is that I didn't mind the bill when balanced against not having to replace a $1000-1400 wall oven. I'd recommend Highland Park Appliance Repair to anyone who asked my opinion.

Description of Work
We had these folks in to work on our 21 year old Roper wall oven which had locked itself closed after I had ran the self-cleaning cycle and would not unlock. The oven had also been making a lot of fan noise and the digital display had a habit of going dark, then coming back, over and over, etc.

A+ Appliance Repair and Maintenance

A+ Appliance Repair and Maintenance LLC is a family owned and operated appliance repair business providing top notch repair services for large kitchen and laundry appliances. We have built a reputation for providing quality appliance repair services that are fast, affordable, and complete with the utmost precision. Gone are the days of stressing over your broken appliances. You can rest easy knowing that your appliance issues will be taken care of, your problem solved and your wallet protected. So don't wait until it is too late, schedule a service call today and let us help extend the life of your appliance.  …

We have the experience and dedication to get the job done right! Specializing in Appliance services; We guarantee your satisfaction, and we won't leave until the job is done right. We pride ourselves on the quality work we provide, while delivering great customer service! Call or click for your estimate today!  …

Chicago Appliance Service has been providing prompt, professional appliance repair service at affordable prices to customers since 1957. We repair standard residential through commercial grade appliances - both freestanding & built-in units & we work on old & new models alike. We offer FREE estimates with repair service. (Service charges will be required on estimates for front load washers, stackable washers & dryers, and high-end refrigerators, ranges and dishwashers due to lengthy technical time.) 24/7 Live operators available to take service calls. Ask about Angie's List discount. We provide professional repair service on most makes & models of major appliances incl: refrigerators, freezers, dishwashers, ovens, ranges, microwaves, washers, dryers, & disposals. We repair Whirlpool, Kenmore, Maytag, Sears, Frigidaire, LG, Samsung, Sub-Zero, Bosch, Kitchen-Aid, Amana and many other brands - See our website for complete list. We do not service appliances manufactured by Haier, Astor, or Fisher & Paykel. We service CERTAIN Meile, Wolf and Viking appliances. Please call us to check on your model. We do not offer after hours emergency service. IF FOR ANY REASON YOU ARE NOT SATISFIED WITH OUR SERVICE, PLEASE CONTACT THE OWNER - AL @ 773 968 5015 - PRIOR TO MAKING A REVIEW.Serving Portions of Chicago: Central*, North, Near West and South/Southwest. Suburbs: North, Northwest, Near West, and certain Western, Southwestern and Southern suburbs. We offer refrigeration/freezer repair in extended areas. *Due to certain repair requirements we are unable to provide service to the entire area. Please call us @ 773-631-5151 to confirm that we can provide service to your address. No subs. Phone calls preferred at 773-631-5151. Can be texted @ 773 968 5015. CALL US @ 773 631 5151 for FASTEST RESPONSE & SERVICE - DO NOT USE ANGIE'S LIST MESSAGE CENTER. Additional locations in western, northern and southern suburbs. WE DO NOT PROVIDE PLUMBING, HVAC OR SMALL APPLIANCE REPAIR WORK.  …

1st Choice Appliance Repair is currently rated 4.5 overall out of 5.

No, 1st Choice Appliance Repair does not offer eco-friendly accreditations.

Are there any services 1st Choice Appliance Repair does not offer?