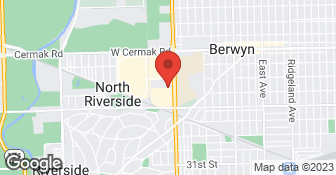 Pulaski Roofing & Construction has over 30 plus years of experience in commercial and residential roofing and Construction throughout Chicagoland. Our services include new construction, rehabilitations and repairs. We believe that exceptional service builds long-lasting relationships and we have built our practices on a commitment to quality, reliability and respect

They were very professional and personable. They seemed very knowledgeable and honest, I trusted them right off the bat. I no if I have a problem they will be out promptly. I do not expect any problems but, we will see next good rain.

Description of Work
We have signed the contract with them but, the work has not started yet. Will give a full review when work is completed. Thank you

This company is a SCAM BEWARE ! After reading there reviews I call the company asking for a quote on a new roof - What this company did was "contracted" out my quest and sent 2 highly thugs that did not know roofing and tried to pressure me into spending $20 to $25 K on a roof. Completely the worst experience of my life and to all members BEWARE THIS scam company

Description of Work
Need a new roof on my apartment building .

Description of Work
New roof for my apartment building

After soliciting four estimates from different companies, I selected Pulaski because they offered the best overall proposal. Nick was great to work with, very accommodating and his crew did a great job on the roof and cleaned up very well afterwards, including removing the roof debris from the gutters. Also, throughout the process, Nick suggested several ways to keep costs down and did not propose any superfluous add-ons or work. Nick is now my go-to roof guy! I would recommend this company to anyone that needs a honest opinion and a affordable solution for there roofing needs.

Description of Work
Repaired a few leak in the roof.

Me and my Husband inherited a very very old 6 unit building in the Logan Square Area of Chicago from my husbands Grand Father in spring of 2011 and have renovated it for rental. We was told about Pulaski from a good friend of ours and had some of the work including roofing and tuck pointing done by them. They informed us at the time (2011) that the roof was in need of a new roof but at that time we could not afford a new roof with all the other expenses of the renovation, so we just had them fix the leaks and some brick work that was present at the time. Everything was going good until we had a large snow storm in early February of 2015 and I got a call from one of my tenants letting us know that he heard a large sound from the roof in the night and that there was spots on the ceiling when he woke up. I gave a call to Pulaski and within a few hours Nick came out. The roof had almost 15" of snow and ice on the roof, they removed the snow and discovered a partial roof collapse and he explained with pictures that he took of the roof that the snow and age of the roof caused a collapse and this was the cause of the leak. At that point we was out of repair options, so we decided to put a new roof. We collected a couple different estimates within a day or two from local roofers and we decided to go with Pulaski and not for the price, they was about $3,000 more then the lowest estimate but we felt they just had more knowledge and experience to do the job right. I learned from my past with other contractors and you could quote me on this "You Get What You Pay For". They started right away on the roof, they removed only the damaged wood and saved us a few thousand dollars in extra wood cost and placed a new roof on the building with a 20 year warrantee, they also repaired the chimney and installed a new gutter. So far everything is good. Will Use Them Again On My Other Buildings. Best Regards Jennifer.

Description of Work
Had a partial roof collapse on my 6 unit rental.

Thank You For Your Review. Let Us Know If You Ever Need Any Other Work Done To Your Property.

Superior Chimney is a family owned and operated chimney sweep and masonry chimney restoration company. Our family recognized the demand for a service overhaul in an industry shadowed by skepticism as a result of it being primarily commission/incentive based for its technicians. We are proud to be a service company, not a sales company! We utilize current industry technology for unsurpassed service while still maintaining the best price to product / service ratio. It is our commitment to maintain safe use of all chimney types in all of Chicagoland while exceeding your expected level of service. Our fleet of trucks service all six Chicagoland counties six days a week, year round, in effort to minimize chimney fire statistics. Rest assured and enjoy your Superior Chimney!  …

Pulaski Roofing & Engineering is currently rated 4.2 overall out of 5.