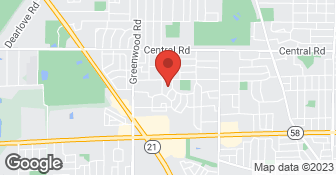 A- Plus Electric provide all types of electrical work, which includes residential, commercial and industrial. 5 years warranty and 10% off labor for every job....

The owner is licensed electrician who personally performs all free estimates. Troubleshooting and installation and oversees all the work being done in your home/bussines- You have a problem you can not deal with, we will help you.Great competition in the U.S. market. mean the entire company, the team that constantly improve and develop our skills for our clients. With us the customer is the most important person in the business because we strive that each client was fully satisfied with the project  …

We are a full service mechanical contractor providing complete system solutions for commercial, industrial, and residential applications. We look "beyond the box" to the whole HVAC/R system to provide the latest energy-saving solutions. We offer 24-hour emergency service after business hours a live operator will answer your call and dispatch one of our technicians to you. Our goal is simple-your satisfaction. We take pride in our business and you will notice the difference, from the moment we answer the phone to the time our technician leaves your home. We are listed with the Better Business Bureau and Angie's List and are also top recognized contractors with Lennox. Additional phone - (847) 362-0262. Additional DBAs - Top Tec Heating & Cooling, Toptec Heating & Cooling Inc. Cost is determined by the job.  …

Why Choose Us? We simply do our job! Free Estimates**Fast response to incoming requests** 1 year service warranty**We can take on a wide range of residential electrical projects to include full installation for additions and remodels as well as wiring/panel upgrades, and a variety of other projects. Our team takes pride in the quality of our work and our commitment to outstanding results. We look forward to building strong, long-term relationships with our clients and guarantee your satisfaction.  …

He was fantastic to work with and went the extra to even make sure the light matched the other lights.

Went great. Scheduling was easy, team was early, work was good and clean.

They started out promising since they answered the phone and sent workers when they said. However, they ended up replacing my door bell, spent about 10 mins and charged me $267! When asked to sign a document saying they provided a quote before doing work, I declined and said I would not have agreed to that price if known ahead of time. When I called the office to complain, the owner asked "what, a...

Description of Work
Back door bell did not work

We needed electrical service. We were having smoke detectors that just would not stop. So, the guy came out. He replaced five smoke detectors, he showed us that moisture had got into our circuit breaker box. He had to replace three circuit breakers in there. He put on a whole home surge protector. It was Sunday service, and we were going crazy. The smoke detectors started going off at 4 am. We cha...

Description of Work
He replaced five smoke detectors and put on a whole home surge protector.

The guy was nice enough on the phone initially. Quoted a price for someone to come out within the next 3 hours @ $125/hour. He called back 2 hours later and cancelled for unknown reason. Rescheduled the same for the next day (same time). The next day the technician turned up on-time and went to work. He identified the issue which was apparently a faulty wiring that ran between the fuse box and the...

Description of Work
The power was no longer running to our water heater. Diagnosed as a faulty wire that needed to be replaced from the fuse box to the water heater. The issue occurred during the long weekend for Christmas so we were desperate and simply needed someone to come out asap.

DO NOT HIRE!!!! I used this company because the main circuit breaker service line in my home was arcing and the insulation burning away. The electricians arrived at my home at 1:30pm and spent 1 hour changing out the 100amp breaker. I was not home so I asked my daughter to monitor their activity. The electricians replaced the cable with a #4 cable approximately 45 feet of cable by their count at a...

This is the second time I used A-Plus Electric. The first time I needed to have the house rewired to accommodate a large portable air conditioner I was putting into a bedroom. At that time they also changed out my entire electrical box. They did the same work for my sister who lives a block away. Although my sister and I have the same type duplex, her house was wired differently, so tracing wiring...

Description of Work
Changed out a fluorescent bulb connector in ceiling fixture Change out a hard wired smoke detector which was 20 years old for a combination CO2/Smoke detector Change out an outside wall mounted light fixture Changed out an outdoor GFI outlet on the back of the house, which was previously letting a lot of cold air into the outlet and into the house. Insulated the inside outlet that backed up to the outside outlet.

The electricians showed up on time to do the work. I had three jobs for them, one I expected to exceed the value of the Groupon I purchased and when I asked them them to quote it, it was much more than what I anticipated so I told them to perform the two other small projects I needed completed. When I spoke to the company they explained I would be responsible for the cost beyond the Groupon value ...

Description of Work
Replaced a photocell and added a timer to an existing light switch.

I was quoted $80 for the first hour plus parts. When a simple outside GFI outlet and cover were installed the cost for the parts alone was $88.39 which I find ridiculous. Also I was not told about a $48.00 surcharge and one of the parts I need they didn't have and they quoted me another $300 for that. While they were on time, I will not use again, very disappointed.

Description of Work
Replaced an outside outlet and connected a malfunctioning wall switch.

Please, please run in the other direction if you are even thinking about using A-Plus Electric, Niles, IL! They are a scam! But if you do decide to consider them, make sure you get a quote --in writing-- before agreeing that any work be done. Also, ask to look over a copy of their "Work Order & Contract" before any work starts so you can review the fine print that requires you to sign away your ri...

Description of Work
We had lost power in our garage and needed to get our garage door working again. We call this so called "service" provider because we'd found them on Angie's Recommended List.