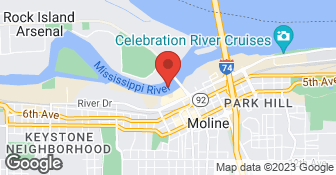 Serving the area for since 1948, Family operated, Free estimates, member of BBB, no subcontractors, Servicing the Quad Cities and outlying areas....

Absolutely Dry basement Waterproofing, Inc. Is a family owned, basement specialty company. We service Eastern Iowa, and Western IL. We provide waterproofing services, inside or outside. We also repair bowed, or cracked walls. Walls can be replaced as well if need be. Egress windows can also be installed. We provide free estimates/ consultations, and travel up to 2 hours away from the Quad City area. Call us today to discuss your home's needs. Reclaim your wet basement!  …

Specializing in remodels! We guarantee your satisfaction and we won’t leave until the job is done right. We pride ourselves on the quality work we provide, while delivering great customer service! Check out our services offered and call or click to schedule a free estimate today!  …

The work took two days. The price was almost 1/3 less than a competitor bid. They installed a French drain system and a sump pump. The other bid was for the glue on drain system which is actually not allowed in some areas and is not the better solution. There is a very good warranty on their work. The workers were very professional and skilled. I would highly recommend this company!

Thank you [Member Name Removed], It was a pleasure working with you. Please keep us in mind for any future projects!
5.0

The job went very well. When we contacted the company initially, a representative came to our house and explained what was needed, how the problem would be addressed, and answered all our questions. On the day of the job, the workers who came were polite and professional, worked hard and finished in a timely fashion, and cleaned the worksite so thoroughly that, except for the new concrete poured, you wouldn't have known they were there. We can't recommend this company and its employees highly enough.

Description of Work
We needed to have a drain installed in the basement floor along a wall to prevent rainwater from seeping through the wall and to carry rainwater out to the street.

Thank you [Member Name Removed]! We are so happy we were able to help you with your basement and like to make sure the process as pleasant as possible. If you need assistance in the future don't hesitate to contact us. Again thank you!
5.0

We are pleased that we were able to help you! Thank you for the great feedback. We always try to make sure the process goes as smooth as possible and like to be able to help out along the way. Don't hesitate to call with any questions and enjoy your dry basement.
5.0

The initial consultation was great! They came highly recommended by a number of people. We dealt with water problems for over 25 years and were certain we would never be able to enjoy a dry basement again but they proved us wrong!! They waterproofed our basement, braced the walls and gave us recommendation on trenching our yard and putting on larger gutters to prevent any overflow problems. The guys were a joy to work with and we looked forward to seeing them every day and missed them when the work was done! We are now enjoying a dry basement and are able to have a family room with no problems!!! We will definitely recommend them to everyone!!

Description of Work
Waterproofing, bracing bowed walls in our basement

Thank you and I am so happy that everything is working well for you! We appreciate hearing feedback from our customers. The guys always work to make sure you are satisfied every step of the way.
5.0

Mike was very professional and offered some good tips to us in regards to how to alleviate future water leaks in our basement. He went outdoors with us and showed us some specific things we could do to keep the basement from leaking. He took this extra time with us even though he knew that we would not be using his services. I would definitely recommend this company to anyone who may be in need of assistance with basement waterproofing!

Description of Work
Mike from Menting Masonry and Waterproofing came out as I thought there may have been a leak in our basement. He was very upfront with us and said he couldn't sell us anything, as he thought the water was coming from the furnace/air conditioner unit. Sure enough, we had the AC repairman come out and the problem was definitely with this unit.

Thank you [removed member name]. We are happy to help out anytime. If you need help in the future don't hesitate to call as there are other services we provide. And as always we do free estimates.
5.0

Great! Lived here for 37 years with ongoing water issues. Not worried about water anymore. Obviously, I wish I had discovered these guys years ago. They absolutely know what they are doing. Could not recommend them highly enough. The crew were wonderful.....they approached things as not just another job to do but as a problem to solve. They came again in July to dig a trench to alleviate runoff from the house above as well. No more standing water in the yard anymore!

Description of Work
Dug up back area where water was coming in from the outside. They worked under very bad conditions.....very, very muddy because of continuing rains. Kept at it for five days. They patched 3 foundation cracks (had to dig several feet down in very wet, muddy conditions) and put in catch basin, drainage pipes, tied in two downspouts, and drained everything to the side yard away from the house. Instead of all kinds of different tiling around the area, they tied everything into one larger drainage pipe so it looked clean and neat - nothing above ground anymore.

Thank you [removed member name]. June and July were definitely wet with record rains! We're happy to help and if there is anything we can do or if you have any issues do not hesitate to contact us.
5.0

Did an outstanding job and did an excellent job of matching new brick to old. Had another bid for the job that was more than twice as expensive and would have taken 3 days compared to the 1 day using 3 people. Very satisfied. Have used them previously for chimney brickwork and was also very satisfied. Only downside was a 2 and a half month wait due to their volume of work load.

Description of Work
Removed, cleaned and replaced loose brick and mortar surrounding a 70 year old porch support. Some new brick had to be used due to breakage.

We are happy you are pleased with the completed work. Menting Masonry and Waterproofing is a small family owned and operated company that employs a small staff of highly trained individuals. While our employees adhere to a demanding schedule our emphasis is quality over quantity of work at a reasonable cost.
5.0

Everything was installed properly and I have had no problems....

Description of Work
This provider has done several jobs for me over the past 3 years... I bought an older without realizing it had a lot of water problems.... Menting Masonry has installed a french drainage system with underground drainage going from my downspouts to the french drain.... they also assisted in installing a rain barrel .... last summer they waterproofed a portion of my basement using a drainage system with a sump pump.... All the work they have done as been very beneficial and excellent....

Thank you (member name removed). It's always great to hear back from our customers and we enjoy working with you always. We'll see you next year too!
5.0

They were very prompt in responding for my request for an estimate. They are going to repair the brickwork on three sides of a screened porch. He was very professional and friendly. He even told me what caused the problem and how to prevent it in the future. He said they were booked out months in advance, but the person in the office found a time in mid-June for me. So far I am very pleased with this faze of the project. I thought the estimate was reasonable. I will leave another review when the work is completed.

Description of Work
Gave an estimate. I have hired them to do the project, but it is scheduled for June. I will leave a review then.

They dug a pit in the backyard for the drainage from sump pump. They were wonderful and very helpful throughout the entire process.

Description of Work
They installed a sump pump with backup battery.

Thank you and we are glad you're happy with your waterproofed basement. Don't hesitate to contact us with any questions you may have. It was a pleasure working with you.