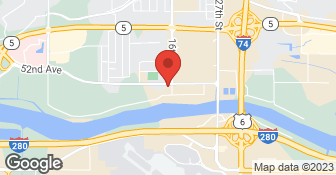 We are a home improvement company that services the Quad Cities and surrounding areas(90 miles from Quad Cities). We specialize in windows, siding, roofing, gutters and gutter covers. Call today for your FREE estimate!!!...

Spencer and his team at Mainstream Home Improvement are fantastic! They provided wonderful service for us replacing our gutter guards. I would highly recommend them to anyone looking for work done on their home and can trust they are in great hands!

Absolutely wonderful. Love what they did and how meticulous they were with my job. I am so proud of how my house looks now! Steve, Spencer and Marcie were responsive at all times and came often to check the progress.

Description of Work
Siding and roof

Mainstream Home Improvement replaces my roof. They explained the process well, showed up when they said they would, called with updates, completed the project timely and followed up after completion to fill warranty info out. They are professional and really care that their customers are happy with their service. We recommend Mainstream to all of our Real Estate clients because we know they are honest, do a good job, and have superior customer service!

Experience was terrific from start to finish. Staff is responsive, clear in communications, job was on time, installers were so polite and worked well after 5:00 as well as Saturday to finish up. Clean up showed little evidence they were ever there. We just couldn’t be happier and will use them for our siding job when it’s time. We highly recommend Mainstream.

Description of Work
All new windows

Great job and followed up to see if we had any concerns, which we didnt

Description of Work
New gutter and down spot

In a time where customer service is lacking, Mainstream brings it back. Great products, excellent prices and fantastic service

Description of Work
Roof and windows

Mainstream people were punctual and so very polite. They worked to finish in a timely manner and cleaned up all the debris! We love Mainstream!

Description of Work
Windows and a door

They did 2 different groups of window replacements 1st was porch, bedrooms, and bath. Windows looks great and porch turned out better than expected. On both orders the time it took to get the windows seem kind of long but they were special order color match. Ordered the second group of windows and they seemed to take even longer than the first group. Second set of windows were not what I expected. The windows were much smaller than the opening and they filled them in with molding, not what I expected and not like the first set of widows. Sales person did not explain this would happen he said they would fit just like the other windows. The windows also leaked air very bad. They came right out and agreed with me and said the manufacturer would come look at the windows, this is where things went very poorly and unprofessionally. When they called to make the appointment I was out of town and they told me it was probably chimney affect and that I should expect that. Funny they did not mention that during the sale. Owner came out to the house with the person from the plant and they basically said nothing was wrong with the windows but would order and put parts in to help with the chimney affect. When person came out to install parts I showed him what was really wrong, windows not pulling together when locked and was letting the air flow through. They ordered new sashes. When they came out to install the sashes I said the other windows had drafts. They looked at them and schedule another appointment. They found that they never put insulation between window frames and window opening, they also must not have caulked between window and frame. They fixed by stuffing some insulation after pulling the molding on the inside, not a very good fix if you asked me. The sales people said they would insulated between the opening and the windows. I told him this was very important to be as the old windows had terrible drafts. He agreed and said that was very important and the windows with insulation would help me save a bunch with utilities. Still have not received the sashes for the small windows which leak, nor have I received the touch up paint to cover the marks on the window frames. Can not recommend this company

The work was excellent, professional. They also had a service called as a victory lap where in they did a follow up check on the work that they provided.

Description of Work
They did a window installation.

The service was professional, quickly done, high quality and it was affordable. Their was no pressure sales pitch as well. The sales pitch was very well done, very organized and it was very informative. After the job was done, the owner went to do the final walk through to make sure that the client is satisfied.

Pat West Gutter Co., Inc. is a 3rd generation family owned business. Our company is rated an A+ business by the BBB. We give a 5 year labor warranty on our workmanship and install only the thickest gauge materials available. All work is performed by our company employees, not sub-contractors.When choosing a contractor,you are not only purchasing materials, but also as important, the installation job.  …

We specialize in gutter protection, repairs, installation, cleaning. realignment, leaf and debris guard installations (in any color), and more! We guarantee your satisfaction and we won’t leave until the job is done right. We pride ourselves on the quality work we provide, while delivering great customer service! We offer 10% off for seniors and Vets with proof of service. Check out all the services we offer below and call -- or-- click to schedule a free estimate today!  …

Mainstream Home Improvement Inc is currently rated 4.8 overall out of 5.

No, Mainstream Home Improvement Inc does not offer a senior discount.