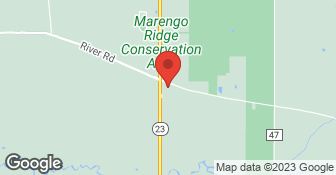 We have been a family owned and operated business for over 40 years. Customer service is our top priority. We are licensed and bonded with many villages, you can feel confident that your work is done properly....

Excellent. Beat the lowest estimate I had received. I was very impressed by how quickly and professionally they proceeded.

Description of Work
Installed outside sewer clean out access. 8 feet of new PVC piping including a t shaped pipe. They removed old clay piping and installed new. They pinpointed where to put the clean out and did so with accuracy. They then completely cleared the sewer line and videoed it for us to confirm that the line was clear and in good condition.

We needed a sewer line cleaned out fast and they managed to get to our home in 45 minutes and have the problem cleared out in another 20 minutes. Thanks guys. I have been a customer since 2007.

Description of Work
They came out and cleared the outside line from a sewer clean out.

This work was recommended at the previous visit Suburban made to rod the sewer line. Suburban made an estimate at that time of about $2000 with the amount paid for the rodding ($85) to be deducted. They arrived promptly and began the work early. They video scoped the line again, and used a locator signal from within the pipe to insure the accuracy of the excavation. I did explain that they were to be careful of some recent garden plantings, and they said that the plantings would not be a problem. They did excavate to over 9 or 10 feet deep. They did place some plywood down on the yard where they would pile the dirt to protect the grass, but as the pile grew from the excavating, it was evident that the protected area was way too small. They did not add more plywood to protect more of the lawn. As they dug down they realized that the pipe didn't go straight out from the house, so the hole ended up larger than was originally thought. I know this kind of thing can happen. Some of the plantings were lost with this additional digging. They removed the old pipe, installed the new and the clean-out. Before connecting the new pipe, the manager went into the hole, and examined the pipe. He pointed out that there was considerably more root blockage further out in the pipe. He gave me a further estimate to install an additional length and then to replace the entire pipe to the city line. Of course the last estimate came with the greatest guarantee, and the most additional expense. I had them do the additional length of pipe (at more expense that the estimate). When they finished installing the pipe, and started to cover the hole, I asked them to save out some of the larger stones so I could use them in landscaping (our dirt here is really a sand/gravel/stone mix under the imported top soil), which they did. Of course, with severe excavation like this there was a large scar in the front yard. Due to the inadequate protection under the pile this part of the lawn was damaged. I know these things are part of this type of work, but I wish more care had been taken with some small things.

Description of Work
The front yard was excavated to access the sewer line to the street in order to install a new, larger diameter PVC pipe (replacing the original clay tiles) and a clean-out access. The pipe was installed, and as the work progressed, the recommendation was made to excavate more and add more pipe to further insure the line remains clean.

We called Suburban Sewer on a recommendation from the previous company we had used. The previous company (St. John's Plumbing) was not immediately available and we needed the work done as soon as possible. Suburban came quickly and had the needed equipment on their truck. When bringing the equipment into our basement, I would have liked it if they had used some coverings for their shoes. They had to cross a portion of our kitchen floor to access the basement stairway. The work was finished in about two hours. They used a video scope after rodding the line, and made recommendations for further work to provide a long-term solution.

Description of Work
Our sewer drain had backed up into our basement on a Saturday. We needed to have the sewer line rodded right away. Suburban was able to come the following Monday. They cleaned out the line and scoped it.

After checking BBB, I called them about 8:30 AM. They kept their promise to arrive before noon. Two men arrived with an electric auger and cleared the drain in less than 15 minutes. This is a family owned and operated business. They have fixed prices and depend on referrals. I asked them, if I need it, what they charged for sewer cleaning. The 85.00 to 125.00 they quoted was far less than the 300.00 I paid to a competitor last year.

Description of Work
My bath drain was clogged beyond my ability to clear it. I chose Suburban because they were advertising to clean any drain for 85.00 and did.

They didn't get it right the first time, but came out again at no charge and solved the problem the second time. It was an unusual problem to have to solve and I'd use them again and recommend them to others.

Description of Work
I had a problem with a drainage filter in my wall, which was very obscure.

They came out exactly on time, took care of all of the details (permits, inspections, etc.) they got the job done in half the amount of time expected and the cost was actually a little less than the estimate. It was $200 less than the original quote and took less time than expected!

Description of Work
They dug up my water main and repaired it for me.

Lifeline Plumbing, Heating and Cooling is now offering ZERO HUMAN CONTACT SERVICE CALLS in order to keep our clients and employees safe and healthy! Lifeline is the winner of the Super Service Award each year since 2011, when we started our profile on Angies List. If you are looking for professional Plumbing, Air Conditioning, Heating or any type of HVAC services in the greater Chicago-land, area make the call to Lifeline Plumbing, Heating and Cooling! We put our customers first with everything we do. That is why we offer a comprehensive satisfaction guarantee on all the work we do, and on all the products we install. If you would like to speak with one of our experts and get scheduled for service, call us at (847) 468-0069.  …

Sewer, Water replacement, repair. Excavation. We have 8 years of experience. We are professional and provide excellent service. Integrity is our middle name. We guarantee your satisfaction and we won’t leave until the job is done right. We pride ourselves on the quality work we provide, while delivering great customer service! Check out our services offered and call or click to schedule a free estimate today  …

WINTER WEATHER: 24 hour emergency services available. Call me today at (630) 546-2588. We have the experience and dedication to bring your dreams to reality! We guarantee your satisfaction, and we won’t leave until the job is done right. Call or click to schedule a free estimate today!  …

Bonded
Insured
All statements concerning insurance, licenses, and bonds are informational only, and are self-reported. Since insurance, licenses and bonds can expire and can be cancelled, homeowners should always check such information for themselves.To find more licensing information for your state, visit our Find Licensing Requirements page.
General Information
Free Estimates
No
Eco-Friendly Accreditations
No
Payment Options
Check, Visa, MasterCard, Discover
Senior Discount
10%
Emergency Service
Yes
Warranties
No

SUBURBAN SEWER & SEPTIC INC is currently rated 4.9 overall out of 5.

No, SUBURBAN SEWER & SEPTIC INC does not offer eco-friendly accreditations.

No, SUBURBAN SEWER & SEPTIC INC does not offer a senior discount.

No, SUBURBAN SEWER & SEPTIC INC does not offer warranties.

Are there any services SUBURBAN SEWER & SEPTIC INC does not offer?