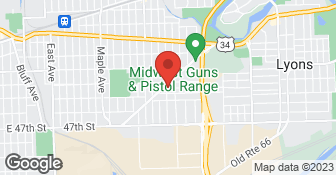 Klasek Painting and Decorating will transform your home’s interior appearance in many intriguing and exciting ways. We pride ourselves in going beyond being mere painting contractors—we provide Professional Painting Solutions! No job is too big or too small for our expert craftsmen to undertake. From an entire new construction home—to a series of connected areas—to painting a single room, our painting specialists will provide the utmost care when working in your home.From the very start of the project, proper preparation must be performed to insure the final product....

Peter seems professional and conscientious at first. He was on and off with communication so this should have been a flag for us. His pricing is fair, but if there are any add ons, get receipts because he inflates hours and supplies. Our house is old and so was not easy and it looks very good now. The painters that work for him are skilled, on time, and do good work. However, chips were everywhere! and could have been prevented if they were more conscientious and used tarps extensively and vacuumed them up in evening each day. They did not do the accent trim inside some double hung windows saying the caulk prevented that (he said he would "take care of it" initially). Peter was not always truthful, or I guess you could say confused- by saying often that he never said certain things or that he would do/finish other things, and assure you "we'll take care of it" and then not. He and his crew disappeared - no call-nothing- for 3 days (Peter said it was 1 day!) when a half day of work was all that was left. But by then we were having problems communicating with him and so this was not surprising. We just wanted them done and gone. At one point when I asked about cleaning the chips he responded "there is our vacuum". Wow. So no, I would definitely not recommend him and I hope his crew finds another person to work with as they did good work. Write every little tiny possible detail down and insist he put tarps everywhere and clean up each night if you go with him.

Description of Work
Exterior house and garage, including scraping and painting and (supposedly) clean up.

Peter is very reasonable and fair. His painter did a great job. I've used his services before and will do so again. This job started out as a repair to scrape and paint one peak to North-facing, cedar siding. We went from there and decided to address all four peaks and lower front garage and breezeway. It needed to be done. The garage side and back along with gutters were not painted due to future remodeling and replacement plans.

Description of Work
Painted all four peaks and front-facing wood siding on 1-1/2 story house, plus front of garage, and breezeway. For reference, the house is brick on the bottom, frame on the top, has wood garage and wood breezeway.

If Klasek Painting was the last painter on earth, I'd do the job myself. Initially Peter provided a bid that was high and then negotiated a more reasonable rate. After Peter started the job he then began to say that he felt his initial estimate was fair and wondered if our business would reconsider and pay him a higher rate for the job. Had the job gone more smoothly, we would likely have accommodated the request.On the second day of work, I received a call from the tenant in the commercial space adjacent to us as when Peter and his crew were performing the work they power washed all the paint chips on to the porch and furniture of the neighbor.Peter then contracted additional work with other clients which left our job to go much longer than it initially should have. The job should have taken one week but instead because his crew was not here regularly it went for about 2 1/2 weeks with a huge scaffold contraption left parked outside our commercial store front for at least one week.After having multiple conversations with Peter to address these issues and attempting to engage with another painter because of the unpredictability of the work Peter took great offense and began bad mouthing me to other contractors and workmen at our building.Peter's work is fairly good but his professionalism, reliability and punctuality are very poor

Description of Work
Exterior work. Scrape, paint/stain all wood member on three rear elevations on three decks in the back, Paint front of building and all window sills and replace any wood that is rotten for 3 elevations

Peter did a very good job and was responsive to our requests. He was quite helpful and real. His prices are very competitive. His work is efficient. No drips/spills. So far the job is holding up and it looks great. The only downside is that rubbish and construction debris were not removed from the site. However, it was packaged up and the site cleaned up when they finished. Overall, I am pleased with Peter's work. I am particularly happy with the amount of prep work that they put into the job.

Description of Work
Powerwashed house (in advance), scrapped, prepped and filled where necessary. For this paint job, we chose an exterior color change. They painted 1 coat of waterproof primer and two coats of SW white on the garage, breezeway, and upper half of the house. Siding was replaced as needed including a large section on the upper part of one side of the garage.

The chair railing was upside down the nail hole were not filled in and they can be seen he never treated the wood on the railing and the painting was sloppy had paint on the woodwork and left supplies on the porch and was mad that we discarded (used roller and tape and half used buckets of paint,) I ask to see the faux painting in a small area he did on 4 walls above the chair rail. It looked horrible and he charged me for that even though I didn't ok it

Minimal service charge of $200.00 with no involvement of sub-contractors unless otherwise needed. we have 26 years experience with employees working for us up to 12 years, total combined experience of 90 plus years of renovation work. Fully insured with work-mans comp. company vehicles, workmanship guarantee. We use only high end premium products and services. Free estimates using Cook and Du Page county Blue Book guide to Estimating non-union. We have no sales tactics for our product sells itself. We are EPA certified renovators. Call the Pros Call RONBOS.  …

Lookswell Painting has been serving clients as a family owned business since 1963. We are a full service painting contractor specializing in residential painting and decorating, commercial and industrial painting, and cabinet refinishing and restoration. Request a quote, or email us at lookswellpainting@gmail.com for immediate service. We are a licensed contractor with over 50 years of experience. We understand that quality goes a long way in making your surroundings look fresh and up to date. We use the finest materials when we work on any project resulting in high quality and lasting results.  …

We are a fully insured, licensed painting company whose primary goal is to provide each and every customer with consistent, professional results. We achieve this through our expertise in all facets of painting , carpentry and stucco finishes From the beginning estimate, to the last brush stroke, we're here to make a lasting impression through exceptional quality and service. Contact Klasek Finishes today, and turn your house into a home.

How is KLASEK PAINTING AND SERVICES overall rated?

KLASEK PAINTING AND SERVICES is currently rated 3.2 overall out of 5.

What days are KLASEK PAINTING AND SERVICES open?

KLASEK PAINTING AND SERVICES is open:

What payment options does KLASEK PAINTING AND SERVICES provide

Does KLASEK PAINTING AND SERVICES offer a senior discount?

No, KLASEK PAINTING AND SERVICES does not offer a senior discount.

Are warranties offered by KLASEK PAINTING AND SERVICES?

No, KLASEK PAINTING AND SERVICES does not offer warranties.

What services does KLASEK PAINTING AND SERVICES offer?

KLASEK PAINTING AND SERVICES offers the following services: We are a fully insured, licensed painting company whose primary goal is to provide each and every customer with consistent, professional results. We achieve this through our expertise in all facets of painting , carpentry and stucco finishes From the beginning estimate, to the last brush stroke, we're here to make a lasting impression through exceptional quality and service. Contact Klasek Finishes today, and turn your house into a home.

Are there any services KLASEK PAINTING AND SERVICES does not offer?