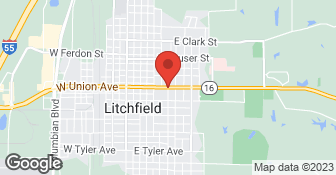 We needed new carpeting for our master bedroom and visited Quality Flooring in Litchfield. their showroom is actually located on Route 16 midway betwwen Litchfield and Gillespie. The showroom was very clean adn it was very easy to find the various carpet displays. Needless to say, i was a littel overwhelmed with the selections, but the salesman was very helpful and patient in helping us choose our Mohawk carpet. We actually chose one of their high end carpets due to feel, appearnace and durability. He suggested that we take several samples home with us to view them in different lighting to see which suited our bedroom wall color. I'm glad that we did because the color we were initially interested in would have made the bedroom entirely too monotone. They have sub-contractors that use for their installation and we couldn't have been more pleased with the installation. The carpet is so beautiful! We were so pleased, in fact that we will use Quality Flooring when we upgrade the carpeting in the other bedrooms within the next year. I would definitely recommend them!!

Description of Work
Mohawk carpet and installation for our master bedroom.

It took 8 months from time of puchase (06/25/07) to finish the job (02/26/08). THE WORST CUSTOMER SERVICE I'VE ENCOUNTERED. I have a two page time line of events related to this job. The job was done for a house I was remodeling for my elderly mother (age 83 at the time of service). The carpeting wasn't ordered until I went to the store to get the final price. They didn't order enough wood laminate the first time. The wrong molding was ordered and it took over two months to get the correct moling. I was told three different start dates. They would call to say they were coming on a certain date to work on the job and not show up. The installer's son installed the vinyl flooring in four different areas of the home, and damaged all of the vinyl flooring. I wasn't told that the son had done the installation until the vinyl flooring was installed, and it's very obvious that he didn't know what he was doing. In the corners, the vinyl wasn't cut at a 90 degree angle. In one doorway, one edge had a scalloped edge to it. When I pointed out the damage, they replaced one area around the water supply line to a toilet with a patch and, in the other bathroom, they caulked around the the water supply line. The installer and his son never told the flooring store owner what happened until I told him in November. The store owner said they would be back to replace the flooring in the one bathroom, but they never called me. I had to call multiple times and was given four different dates before the installer showed up to replace the flooring. By then, I had requested that both bathroom floors be replaced and they did that. After he left, I realized they had used a much cheaper and thinner product to replace the vinyl. I made ten to twelve trips to the store to order the products and pick it up. One time, they charged me for seven boxes of wood laminate, but loaded five boxes in my car. Another time, I called to check on the status of the molding. The salesman, who knew I had been out of the country, asked how my trip went. I told him I had a dream that the flooring job was done. He responded, "Keep on dreaming." At the time, I had been waiting over six weeks. The molding wasn't in that day, but six days later when my husband called, they said it had been sitting in the warehouse for a few days. They said the installer would call in a half hour to schedule an appointment. He didn't. Three days later, my mother called to talk to the owner. A saleswoman, who happens to be married to the installer, took the call and told my mother the owner was with a customer. He never did call my mother. This happened in September. Whenever I would call about the situation, the owner always said they were so busy. There's no reason this job should have taken eight months. I have told friends and family members not to buy any flooring from this store. I'm still stunned at the treatment I received.

The Arizona Tile Company provides the personal and friendly service you deserve, unique design ideas and expert installation of Tile, Carpet, Hardwoods, Laminates, Cork and Luxury Vinyl for your home. We also now carry a complete line of granite and solid surface countertops.  …

Quality Flooring Co., Inc. is currently rated 3 overall out of 5.

No, Quality Flooring Co., Inc. does not offer eco-friendly accreditations.

No, Quality Flooring Co., Inc. does not offer a senior discount.