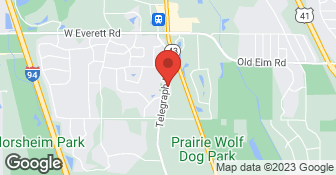 CQ Painting Inc is a residential and commercial painting contractor that specializing in complete interior and exterior solutions for your home or business. CQ Painting has been in business for over 10 years. We know what it takes to create a custom painting project that will beautify your surroundings and transform your vision into reality. And we do it on time and on budget. 5-10 Employees. No sub. Cost is determined by the job. Travel charges may apply if out of state. No Extra Cost for 24 hr emergency service. Formerly known as paint & Finish Co.  …

When the owner Ed came out to do the work, he promised to take care of everything, but never followed up or checked on his team doing the work. They were hired to powerwash the house first, which was done very poorly. You could see dirt all over several parts of the house. He just sent over two new people and they were not supervised at all. They were suppose to scrape my house for all of the loose paint and debris, but did not do it. They just went from powerwashing straight into using the house paint to do spot priming and then painted. The coat was very very light and it barely looked like anything was done. In fact, they never finished the painting job. After trying to call Ed Kennedy several times and leaving multiple voicemail messages, I just finally gave up. In fact, they were suppose to do some work on rotten wood and caulking and never did that either. I would never use or recommmend using them again. Very in appropriate business practices - but they did not hesitate in cashing my check. Do yourself a favor, don't call Ed! He is all talk and smiles and no followup!

Description of Work
They painted our house, which included powerwashing, priming, caulking and painting.

They did a great job by my standards and that is hard to do. I was pleased with outcome of the painting. They did interior and exterior painting for me. Several of my neighbors have used him and been pleased in the past. I would recommend him to anyone.