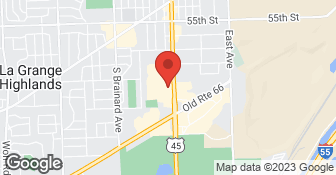 At Dream Home Exteriors, we have over 10 years experience with hundreds of happy clients. We specialize in roofing and seamless gutters. we work to ensure each of our customers receives a settlement for ALL damages to their property that is in the best interest of the property owners, NOT just the insurance companies!  …

Welcome to RK Roofing Inc. We are the premier professional home improvement company offering the highest quality and most attentive customer service. We are known to pay exquisite attention to detail while making customer satisfaction our top priority. Whether your project involves minor repairs or a complete new or replacement roof installation, we are glad to be your number one choice. From the estimate until the job is done, you can feel at ease dealing directly with R K Roofing’s owner, Jarek.  …

I find Home Depot very difficult to negotiate. The merchandise is always there but it takes an hour to find it. They are flawed because of their price and I can't negotiate their stores. They always have a nice product, just impossible to find and their prices are too high. I would perhaps use them again.

Whereas I had good experience in the past with having home depot install a storm door, this project went very badly. Home Depot's outside contractor came and measured for 9 interior doors and 1 exterior door. I purchased the doors and the installation through Home Depot. For some reason the third party installer thatcontacted me was G.S. Floor Designs (phone 8473944000). HUH? A message was left for me on my voicemail to call their number and choose option 9. There was no option 9. I had quite a bit of difficulty getting an install date. Finally we agreed on an install date. The day before I never got a confirmation call. On the day of the install, no one appeared in the morning and I never got a call. I finally called myself and was told the installers were at the store picking up my doors; this was in the afternoon. Supposedly they were going to arrive about 3 p.m. FOR AN INSTALLATION OF 10 DOORS! ARE YOU KIDDING ME? I did not want this team of installers at my home until ten at night, so I told them to cancel and find a different date -- Sept. 24. The day before no confirmation call. By 8 a.m., no one showed and this time I proactively called the store manager at Home Depot in Countryside. I told him what happened last time and if it happened again I would be coming in for a full refund. So I was asking for his intervention. Three men show up about 10 a.m. with the doors. After a look around I am told by the team leader that the Home Depot measurements for EVERY DOOR were wrong and that no installation would happen. Then they left and even left the doors in my garage. They could have taken them back to the store, but they told me someone from Home Depot would be by to pick them up within an hour. Try more like six hours! What a total joke. My wife feels the installation team was right and the measurements were not done properly. I have the opposite opinion. Why on earth the installer was not the same person who did the measurements is beyond me. That is how it should have been done to avoid the finger pointing. Home Depot provided a refund; I am still doing accounting to see if the refund was in full or not. I am going to try and post this review under G.S. Floor Designs also. We will see if I have any success doing that.

Description of Work
I purchased 9 interior doors and 1 exterior door AND installation from the Home Depot in Countryside IL.

It was a headache and it went on for a while. They had the sub contractors do it but they have the warranty and everything. If we would have known we would have planned better, we would have ordered the cabinet’s way ahead of time before we gutted the kitchen. I took the old cabinets out and I put them in my garage before we got the floor done and my wife decided she wanted knew cabinets, so we had to wait that extra time without a kitchen because the cabinets were waiting to be built. The cabinets themselves were about $6700 and then the installation was about $1700. The cabinets were beautiful. They did a beautiful job. They came back a couple of times because we needed to add some trims to them and a panel for a dishwasher and we had the wrong panel and they were like no problem, and came back as soon as we called them when we had everything ready. So they came back right away and finished up the job for us. They were extremely professional. The people that came in laid card board down to protect our brand new floors. From their design team to their installation, they were excellent. It was expensive because it was custom cabinets. The carpenters that came out and installed definitely knew what they were doing. We had some issues with the trim that I was trying to get in and they weren’t very responsive at the Home Depot. The installers were here when they said they would be here, on time.

Description of Work
We had Home Depot do our cabinets in our kitchen. They were custom cabinets.

I thought the work was good but the service people were not always responsive. I found nails and shingles laying around after they left.

Description of Work
They replaced my roof and put a roof on the sun porch.

I found another contractor who got me a better product for less money and much less in labor costs.

Description of Work
Talked to Jim in "Kitchen remodeling" Brought in schematic for new laminate countertops and kitchen sink. He gave me an estimate of approx $800. for the countertops. No problem. I shopped around and found everybody needs to make this same 300% markup on materials. Here's where it gets interesting. He tells me it will cost another $800 labor to install the countertops and the sink and faucet will cost an additional $400 in labor. Forget the fact that he wants me to pay twice for moving the kitchen sink. This is a 2 to - 2.5 HOUR JOB on-site. Which is what it took the contractor I hired (1 lead man and a helper) to do it. $600 an hour for labor, Home Depot ?? I'm insulted .