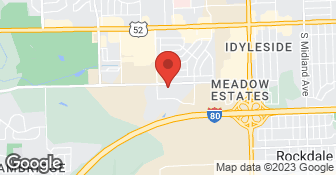 This company put my furnace and central air 11 years ago. I had them for regular maintenance for heat and air for $192 each year. I called because central air wasn't working. I am 68 years old and they said they couldn't come that day and tomorrow it would cost $192 for emergency call. I said I was in their maintenance program. They said that doesn't do anything for service calls only preventative maintenance. Also 3 years ago a maintenance tech was so rude to me because he couldn't fix problem, I told him to get out of my house. Tech manager came to my house and repaired a broken wire that the tech that tried to clean flame rod on their regular maintenance visit broke the wire.

Description of Work
Had no air in 90degree weather on record high weather for weekend.

They left it extremely clean. I was impressed with it. I feel like they know what they're doing. They are very proactive in addressing my needs. They call to check on my furnace about once a year. I'm just very impressed on the quality of their service.

Description of Work
They came out and did an inspection for me.

They are reliable, very knowledgeable, very professional, good expertise. It's just a great overall company and they kept their word. They are very polite, no problems at all, very professional. They got me the results when they said they were going to get them to me, very fine.

Description of Work
Heating and A/C

Arrived on time and everything went smoothly. They cleaned up after themselves and left no questions unanswered.

Description of Work
Replaced furnace and a/c with a top of the line Trane 16sear unit an h/e furnace. Also reinstalled humidifier and put in a hepa filter. Ran all new venting and new mounting brackets.

It was a 2 day install, Doug, Ted and Brett showed up the first day and really did an awesome job! Took out the old system, put in the new furnace, so I had heat that night! They even re-piped my hot water heater with hard pipe at no charge! Doug explained everything they were doing and how the furnace worked! The second day Andy and Kevin completed the install of the condensing unit, replacing the copper tubing in its entirety! They also pulled new wire to the T-Stat so it wouldn't have to run on batteries, at no extra charge! The area was cleaned up better than the way they found it! All the install guys were very polite and professional! In addition, all my paperwork for the rebates was filled out by the lady in the office, LeAnn (hope I got that right!) all I had to do was fill in account #s and sign it! I would highly recommend Lockwood for your furnace and A/C needs! Awesome job everyone!

Description of Work
Just had my Furnace and A/C replaced by Lockwood! The quote was almost $2000 less than 4 Seasons for a better system! Bob S. took the time to explain things clearly and even explained all the rebates I would get totaling $1270, that really brought the cost down!

I think they're really competitive.

Description of Work
I just have them come and keep up with it. They did a maintenance check.

They have always been very responsive. All their service technicians are good but there is one particular one that comes. He always seems to go a step more like take a little bit more time explaining and things like that.

It's been over 2 years since we purchased our new furnace and A/C units from Lockwood. A technician came Thursday to maintenance our furnace and I remembered how much I appreciate this companies professionalism and candor. Everyone I've delt with at this company is a pleasure to do so. I gather that this is a company that hasn't gotten to big by their own choice. They are all very intelligent about their products and helped us get the most for our money to suit our needs. I'd like to add that though I didn't have a lot of knowledge in HVAC, I found out that some of my co-workers did. I explained what units I purchased, the price, and the companies optional maintenance package and got an at-a-boy for landing a good deal. I highly recommend this company. Do yourself a favor, and at the very minimum, let them come and give you a quote on what ever project you are looking to have done.

Description of Work
Purchased and Installation of new furnace and central A/C systems.

From the first estimate to the follow up Lockwood was awesome. During the first visit was given a lot of information and options. Talked about moving ac to side of house to clear up patio, also where the new vent would be placed. Lockwood was able to accommodate our requests. The job went as promised. The two installers were very professional and explained everything that we asked them. Upon completion we showed how to work everything, what and when things needed to be Checked or replaced. Was given suggestions on things I could do to improve the efficiency of the new furnace and ac. Great family run business will not find a better company.

Lockwood came within 2 hours of my calling them, fixed the problem, and the furnace has been fine since.

Description of Work
Furnace was running only for short periods, then shutting down.

No Contact Service Available and still open! Porterhouse Heating and Cooling is locally owned and operated in Frankfort, IL. We service in the Chicagoland area, South side and Northwest, IN. This is your one stop shop for all of your Heating, A/C and Hot Water Heater repairs and installs. Also now offering air duct cleaning for entire house - call for pricing & details! We also repair and installs thermostats (programmable and non programable). We service both Residential and Commercial properties. Prompt, professional service is the only way we do business. We are committed to serving our community and making sure your systems are operating efficiently and effectively. We are a step above the competition. We pride ourselves keeping our customers a No. 1 Priority. We are licensed, bonded and accredited with the BBB (Better Business Bureau). Financing is available.  …

TR Miller Heating, Cooling, and Plumbing has provided the Plainfield, IL area with excellent HVAC service since 2008. Offering straightforward pricing, emergency services and the latest technology, they will help with all of your HVAC needs. Call today to schedule your appointment!  …

Lockwood Furnace Co is currently rated 4.8 overall out of 5.

No, Lockwood Furnace Co does not offer a senior discount.