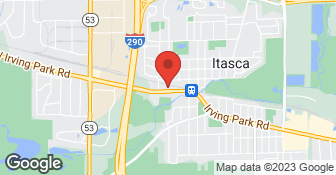 Wm. Meyers Movers, Inc. is an Itasca, Illinois moving company family owned and operated for over 93 years. We provide individuals and families with the finest local and long distance moving services in Illinois. Customized estimates are provided for both local and long distance moves by having a professional move consultant come to your home to conduct a move inventory and create a no-obligation price quote. Complete the form above and an Arpin representative will contact you shortly. Proud Moving and Storage Provider of the Chicago Bears for 30 years!...

Good Move Movers is a moving and storage company located in Elmhurst, Illinois. We specialize in local residential moving. We also have temperature controlled, fully licensed and insured warehouse. Our prices for local packing and moving are always competitive and our storage pricing is prorated per day. We also do overnight storage to accommodate closing days. All moving professionals must pass background checks.  …

We are provide moving helper, cleaning service and furniture assemble. We guarantee your satisfaction and we won’t leave until the job is done right. We pride ourselves on the quality work we provide, while delivering great customer service! Check out our services offered and call or click to schedule an estimate today!  …

I have to say that I’ve never experienced quite the level of poor service as I received from Wm. Meyers Movers. The movers were rude, careless, slow, and, in my opinion, unfit for the job. And, at least one of them was a thief. Immediately upon arriving (late), one of the movers said “who’s brilliant idea was it to put us here today” and made a motion of shooting himself in the head. This was the ...

I'm sorry that you're still dissatisfied with your move. We've done everything in our power to make good on the damage, including paying over $1600 for your repairs and overall claims. The "theft" of the cough drops should have never happened, and we sincerely apologize for that. The crew member has been reprimanded and something like that will never happen again. We have no excuses or explanation...
5.0

It was four moves. They were awesome. There were no issues. I highly recommend them. They did a great job. Nothing was damaged and everything showed up on time.

Hello, Thanks for the awesome review!
5.0

They were quick, efficient, and provided excellent customer service.

Description of Work
They moved our whole household 380 miles to our new home in Wisconsin.

Hello, Thanks for the awesome review!
5.0

Arpin Van Lines provided excellent service. They were honest and hard-working. Some of the downfalls include them taking longer than I expected. I was originally quoted to reserve a freight time, and being in a condo, I could only reserve the freight elevator for two hours. The day before, I received a call that they would need three hours to pack so they would show up at 10 AM and we would use th...

Description of Work
Arpin Van Lines assisted with packing and transporting my personal items from Chicago to Boston.

Hello, Thank you for the awesome review!!
5.0

This is the first cross country move for me, so I proceeded to review the list of carrier's on Angie's List, talk with friends, view various moving web sites online, check the BBB to read customer reviews (including horror stories) to find a moving company. I contacted the Wm Meyer Moving Company directly to set up an appointment for estimate. They were quick to schedule a review and their salesma...

Description of Work
They moved me from my condo in Chicago to my house in Charleston, IL.

They were great. We had a large house to move and they were there for 4-5 days. This is actually the 2nd time we've used them. We keep using them because they are on time and their crew is very good. It is a group we are very comfortable with, and they are very friendly.

Description of Work
They moved me from Illinois to Alabama. It was a whole house move.

Having moved many times both across the country and locally, I have had a lot of experience with movers. Meyers Movers was by far the best company I have worked with and I am SO glad we are using them again for our long distance move. The crew showed up right at 8am and began work. They moved so fast (on one of the hottest days of the summer) that we were not able to keep up with them. The estimate had been for 8 hours and they were done in less than 5. They did give us some of the credit as we were organized and ready for them, but they did the work. This included fitting all of our items in a 10x15 storage unit that was barely big enough. They piled boxes to the ceiling and managed to get everything in without damage.

Description of Work
We needed to have our "stuff" moved into a storage unit quickly as we sold our condo and they wanted a quick closing. We had already contacted Meyers Movers to do our long distance move in the fall, so I called them to see if they could do a local move within a week. They were able to find a day that worked for us and we booked them right away.

Description of Work
We moved from a sprawling two-story home in the Western suburbs to a four-story home in Lincoln Park and they packed 50% of the house. Three weeks before, they came, they dropped our boxes and we started packing as much as we could. A week before they called and said "how are you doing with your packing?" I said "I'm not." They brought two packers and two days before we were ready to move and they packed us about 80% of the way. The day before we were ready two move, they sent two more guys back and they pack us 100% so that e can still have our beds and we can cook and stuff like that. On the day of the move because we were moving on a different styled house, on a constricted street, they brought 2 much smaller trucks and it was like clock work, they were just in and out of the old house, really, really, really fast. It was an hour drive into the city lunch break for their crew, the day that we move, it was easily 100 plus degrees, the old house air-conditioning broke a week before, they were just dying. Their foremen run out got a towel and water for everybody. They were just so professional and took care of their guys. They didn't slow down because you pay by the hour. My husband and I were thinking "oh my god, our bills going to up like 30% because they're moving so much slower." The foreman pulled us aside and said "don't worry about it. We do this. our guys are going to be on time. Don't sweat it" and they were. They were on top 100% of the way. They didn't broke anything. They took extra care with the pieces that we told them that were quite important to us. We had a 6 year old boy who was pretty traumatized by the move and they would give him little things to do to help with the move so he can feel like he was part of it. They were fantastic. They came back a month later picked those empty boxes for us and then they came out one more time to move things that weren't placed appropriately to our taste free of charge. They were really excellent.

A bit pricy, but you get what you pay for. They were good, fast, responsive to calls, and stuck to the estimates and timelines they started with. If I had a complaint, it would be the rather long delivery window they gave me (2 weeks), but I think that is pretty standard for long moves. Overall, good service and no surprises.

Description of Work
Long distance move from Chicago to DC. I drove most of the really fragile stuff out myself, but did send some heirloom furniture with them.