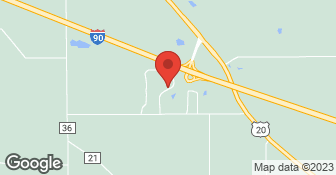 A & R Wood Floors is a family owned and opperated floor installation and refinishing company serving the Northwest Suburbs of Chicago and the Fox Valley area in IL,

We had our 19 year old wood floors refinished. They did an excellent job, great service, and very responsive.

I hired A&R to install hardwood in one room and to stain and refinish most of the hardwood floors in my home, just before Easter 2017. First the install was great and that is where my praise ends. As for staining my floors, I did not get what I asked for, I wanted a Red Mahogany for all my floors except for the new floor, well the only time the floors look nice is when there is barely any light otherwise when daylight hits them some of the floor is "pink". I had questioned Ron about the pink and the lightness in the floor before they put the poly on it and Ron re-assured me that once the poly was on the floor they would be darker. Well they are not, now I can go and change all my light bulbs to the soft white which has a yellowing look by I am having skylights installed and in the daylight they are light and some areas still look pink. Now this is not just me, when someone new has come over I ask them to look at the floor and tell me what they see all but one person said they saw pink in the floor. They also has for some reason taken part of my floor at the kitchen wall and made a dip in it now I am having my kitchen redone and hopefully the wall will be removed but if it can not then I will have to replace part of my floor. As for my sons room the one with the new floor, he wanted something closer to a black color and we picked out an ebony which he stated would be the closes he could get to the black that my son wanted(we gave him a picture of the floor he wanted) it too is not dark. And they only put on 2 coats of poly, we did everything he told us to do we waited to put furniture on it we kept the dogs off (which was no easy feet) But where everyone walks the floor is not wearing well, it looks terrible. Since then I have asked several other companies given my home life and my dogs what recommend (not telling them I already had the floors done) they have all told me that they would put at least 4 coats of poly on the floors. As for my color it is my belief that because most of my house has a rustic look (my house is 53 years old and nothing has been done to the house) I am in the process of changing some of the rustic things in my house) that I really did not want such dark floors. Well he was so wrong and yes I did send him an email to that fact. I am truly so unhappy that I get sick every time I think about having to have then redone again.

Description of Work
I had new hardwood installed & Stained in 1 room and then I had my hardwood floors redone in 3 bedrooms a hallway and the living-room.

Mrs. [Member Name Removed], I am sorry that your floors did not turn out to your expectations and I would be more than willing to work with you to find a resolution. In my defense, on your existing oak floors, I special ordered the "Red Mahogany" stain per your request, showed you a test color sample on your floors prior to starting the job, and received your approval for the stain color used. On the new floor that we installed in your son's room, we used Ebony stain (which is the darkest stain we carry), once again, we showed you a test color sample on the floor, and received your approval on the color. After sanding and prior to staining the floors, we did a process called "popping the grain" which is wiping the bare wood floors down with water to open the grain in order to accept the maximum amount of stain pigment which will achieve the darkest color possible. The finish that we used is our standard two coats polyurethane applied after the stain. The polyurethane is applied with a 3/8" nap roller and is one of the thickest polyurethanes that I am aware of. If you had asked me for additional coats to be applied, I would have been happy to accommodate, but would have recommended against it. During my 37 years of experience of using this polyurethane, it is my opinion that additional coats gives the floors a plastic appearance and shows scratching more readily. One reason that you may feel that your floors may be showing wear is not because of the lack of finish, but because of the dark color stain that was used. The best analogy that I can use as an example is comparing a white car to a black car. The white car can go weeks in between washing and not show any dirt, where after washing a black car, it will start to appear dirty as soon as it hits the road. Wood floors have the same tendencies, the darker the stain (as in your case), the more they will show dirt, dust, and scratches. I can't comment much on the dip in the floor by the kitchen because I haven't seen it. You did mention it to me after we were done and told me not to worry about it because you were planning on rehabbing your kitchen and that part of the floor would be removed anyways. Once again, I do apologize for your any dissatisfaction of the job that we performed. Sincerely, Ron A&R Wood Floors
5.0

Ron is amazing... he responded within one day and came over for an estimate. He took 2 days to sand, stain and seal my old hardwood floors in living room and 2 bedrooms. He put stain samples on the floor so I knew exactly what color I was picking. He left my house very clean. He kept me updated everyday on the progress and his schedule. He was even considerate to ask if I wanted the a/c left on or off. Great workmanship and professionalism!!

Description of Work
Refinished hardwood floors from the 1950's.

Description of Work
Re-finished my wood floors. Very happy with the work and finished product. I would recommend this company to a friend.

I am glad that you are satisfied with the work we performed at both of your homes, Thank you for the positive review,
5.0

A & R Wood Floors were very efficient and got the job done very quickly. He came back two times to do two coats and everything turned out very well.

This was the 2nd job this company did for us. They had done a good job for installation of wood floors for us the 1st time. The 2nd time, I mentioned to them a squeak in the floor I had noticed that I wanted addressed before the install was done. They did not, installed over it, and we had a loud squeaky floor. I talked to the owner about it and he absolutely went ballistic, yelling, very immature and unprofessional stating it was not his fault(Which I agreed with, the squeak was there before they arrived, but I made it very clear I wanted it addressed before a permanent wood floor was put over it). My choice was either have somebody else finish his job and have my house(with kids) torn up for a few weeks or have this man-child finish the job after the repair was done properly by someone else. The bottom line - it was an awful experience.

Description of Work
Installing of wood floors and finishing on site.

I just now learned about this review. If my memory serves me correctly, Mr H was informed that the squeeks that he was hearing was due to improper construction of the framing and that it needed to be addressed by a framing contractor before the wood floors were installed. He didn't want to go through the extra expense, and asked if we could try to screw the subfloor to the floor joist before the installation. We did with the undrestanding that it might not work and that we couldn''t guarantee anything. He agreed and was still unhappy with the squeeks that remainedafter the installation of the new flooring. He wanted us to take out the new flooring and repair the subfloor at our expense. I disagreed. Finally after going back and forth, we removed the new flooring (at our expense), he called in a framing contractor to repair the framing(at his expense), and then we re-insalled the floors and finished them to Mr. H's satisfaction.

Here at Floorscape Design we specialize in hardwood floor installation and hardwood floor refinishing (resanding). We are a family own business and offer nothing but the best.  …

Established in 1984, family owned/operated, & a 2017 Super Service Award winner-- Gerry specializes in hardwood flooring services in the Chicagoland and has provided great customer satisfaction for years. The Hardwood Floor Masters give prompt, professional service for both residential and commercial business customers. Since we were established, we’ve handled every type of hardwood floor challenge you can imagine-- from simple hardwood floor installations; to more complex repairs, to floor sanding, refinishing, and restoration of damaged hardwood floors. If you need a new hardwood floor, we will bring samples right to your home, so you can easily find the type of hardwood floor that will fit your home and lifestyle. If you have an existing hardwood floor that needs to be refinished or repaired, we will make it look like new, guaranteed. Gerry offers FREE in home consultations so give The Hardwood Floor Masters a call today!  …

A & R Wood Floors has been offering complete wood floor installation and refinishing services for over a decade. We can revive your existing wood floors and make them look like new again or we can install a new wood floor in any room of your home. For an added value, we are now featuring the Bona Dust Containment system to keep over 95% of the dust out of your home. We specialize in: • Floor resurfacing • Installation • Restoring • Sanding • Custom borders and inlays • Repairs • Custom stain

How is A & R Wood Floors overall rated?

What days are A & R Wood Floors open?

What payment options does A & R Wood Floors provide

Does A & R Wood Floors offer a senior discount?

No, A & R Wood Floors does not offer a senior discount.

Are warranties offered by A & R Wood Floors?

No, A & R Wood Floors does not offer warranties.

What services does A & R Wood Floors offer?

A & R Wood Floors offers the following services: A & R Wood Floors has been offering complete wood floor installation and refinishing services for over a decade. We can revive your existing wood floors and make them look like new again or we can install a new wood floor in any room of your home. For an added value, we are now featuring the Bona Dust Containment system to keep over 95% of the dust out of your home. We specialize in: • Floor resurfacing • Installation • Restoring • Sanding • Custom borders and inlays • Repairs • Custom stain

Are there any services A & R Wood Floors does not offer?