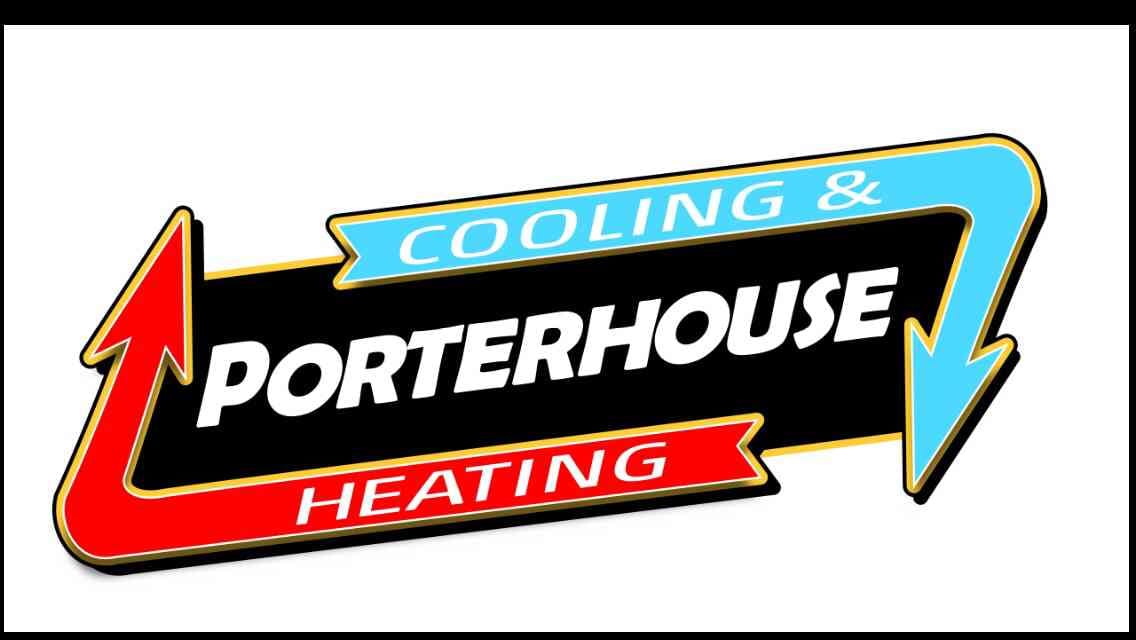 No Contact Service Available and still open! Porterhouse Heating and Cooling is locally owned and operated in Frankfort, IL. We service in the Chicagoland area, South side and Northwest, IN. This is your one stop shop for all of your Heating, A/C and Hot Water Heater repairs and installs. Also now offering air duct cleaning for entire house - call for pricing & details! We also repair and installs thermostats (programmable and non programable). We service both Residential and Commercial properties. Prompt, professional service is the only way we do business. We are committed to serving our community and making sure your systems are operating efficiently and effectively. We are a step above the competition. We pride ourselves keeping our customers a No. 1 Priority. We are licensed, bonded and accredited with the BBB (Better Business Bureau). Financing is available....

A home we recently purchased had AC units installed by Porterhouse. Shortly after our purchase a leak developed from the AC units. We were forced to call for an emergency heating and cooling visit to fix the issue. We ended up using a 3rd party heating and cooling company since we did not know Porterhouse did the install, and the 3rd party heating and cooling company identified that Porterhouse did not properly glue the AC drainage pipes when the AC units were installed, causing the leak. When we contacted Porterhouse they denied any responsibility for the issue, implied we were lying to them about what caused the issue, and refused to reimburse us for the cost of the emergency visit to stop the leak. The interaction with Porterhouse was confrontational and unpleasant.

Everything went well. The whole job was finished in one day..

The crew was on time (slightly ahead of schedule), through in their work, professional, cleaned up before/after, and highly responsive. Scheduling was done through text, as was the pre-consultation. Further, PorterHouse was price competitive, and offered me one of the better quotes/prices for a water heater replacement.

The gas company installed a new meter yesterday in my home. They said they detected a gas leak in the crawl space & they could not turn the gas back on until it was fixed. I called Porterhouse who I had used before & left a message this was an emergency. They even had a coupon for gas leaks. I received a call this morning from a woman saying they had no one that could repair the leak. When I told her I didn't understand how they could have no one when they advertise it, she just kept repeating there was no one to help me. Very disappointed. I previously had recommended Porterhouse to my neighbors but not anymore.

Im sorry we didn’t have anyone available at that time an we truly hate to loose a good customer… id like to offer you a free furnace or a\c clean an check .. if you don’t want to use it you can give it to anyone else to use it an again I’m truly sorry no one was available…
5.0

Devonne came out for service call, and of course the noise in the furnace didn't occur while he was here, but the motor was cutting off. Long story short.... Devonne was very thorough/informative, professional, and did a lot of trouble shooting to figure out what was going on. Thanks for the great service! I would also like to say thanks for the promptness. I called for an appointment at 10:20am. They gave me an arrival time of 11am-12pm. Doorbell rung at 10:31am. Outstanding!

Description of Work
Service call to address a rattling noise/sound in furnace.

Description of Work
Great job!Jamari was was great very friendly made my elderly mother feel comfortable!.

The company was able to give me same day service. They arrived on time. Answered all of my many questions. The tech Mike did an excellent job on the installation and showed me how change the settings. I will definitely use their services again.

Within 5 minutes after Roy walked in, I knew I was speaking with an expert. He talked me out of wasting money on what I wanted (getting rid of boiler and replying on furnace) telling me about how everyone in the city during -40 degree nights was will freeze and if I keep the boiler I'll be comfy. He also talked me out of choosing a heat pump, saying in Chicago it will cause problems in the dead of winter and then I'll be out of luck. Initial estimate was only to replace the 60 year oil leaky boiler and 40 year old loud AC and furnace. Came in, did the work quickly, and when we were doing final inspection he pointed out where my last remaining original furnace was having problems. Gave me a great price to just get the the last furnace and AC done (AC was 40 years old). I know they won't be the cheapest but if you want someone you can trust who will guide you with his 30 years of experience and teach you the finer details of heating and cooling while delivering quality work, go with Porterhouse. I won't trust anyone else.

Not well at all. I initially hired them to fix the air conditioning. I paid for a new capacitor, and had air for only 1 week, before issue reoccurred. Called them back, to find out, it was the furnace all along. I'm looking at a replacement, as repairs would be costly. Mike said he would wire it straight to the blower, so I would have air, but he didn't guarantee the work. And it didn't work. I ended up hiring another company, to find out the wiring was exposed, and it could've been a dangerous issue. The new tech, had to actually replace the wire, before he could correctly check the unit. I'm disappointed in that I paid for 2 service calls, plus a new part, when I shouldn't have.

Description of Work
Air Conditioner was not cooling house

We tried to help the customer because at the time she cannot afford to make the second repair which was no relation to the first repair . The first repair was for the AC we fixed it an the air work for a week as the customer stated.We never touched her furnace until we were called back out a week later because the relay on the furnace went out which is no relation to the air condition. Customer stated she cannot afford to replace the board at the time .customer also stated as well that it never worked in her above comments but then stated it worked a week. We fix the AC and it worked fine then her furnace computer board went out which you can’t have the AC working without the furnace working properly we were transparent with everything we did and she agreed because she could not afford it at the time .When a system is over 20 years old it can need repairs from time to time depending on how well maintain the system has been. we’re sorry that you were not pleased with our services but we tried to be transparent by telling you this was a temporary fix just to help you get air because it was Exstreamly HOT 🥵 an the timing was bad to repair the furnace.
5.0

They called me right away after I requested service through Angie's List. They came out quickly and performed the service requested. Everything went smoothly.

very well Jamarr arrived on time and was very efficient

Description of Work
Cleaning the furnace

I was very impressed with Porterhouse. Two gentlemen showed up promptly and assessed the situation even trying to improve upon what I had asked for. They dug up, ran new piping, and had my grill fired up in only a couple of hours. They were the third company I had out but the first that didn't mind doing the work and affordable!

A big shout-out to Shawn and his team. He was very knowledgeable, addressed all of our concerns, and made us feel comfortable. We had a full furnace and AC replacement and not only did he make a great offer, but they were on-time, fast and professional. Job well done! I would recommend Porterhouse cooling to everybody who is thinking about some HVAC work.

It went well the worker was polite and sufficient.

Great. Didn't take the technician long at all to complete the job. Would definitely hire them again. Very please with work and service.

Great. I was out of state and my house and dog sitter called. My house temp, was 85! Look up Angie’s list. Called the business and explained the problem. They got the repair man out the next day...on a sun day!! My air was fixed by the repair man that day. My sitter said he was very nice .....price was great,,, I would have them again. This is the 2nd time I use Angie’s list.

very well, would use their service again.

Shawn arrived on time and did a fantastic job

Description of Work
Tune up Furnace for winter

We are beyond happy with the work and professionalism of Porterhouse Cooling and Heating. I called for an estimate and they were out the next day. Then that same day they were able to get us set up for our work. They began the project only a day later. They truly were amazing to work with and supported us throughout the process. We needed a huge job done, because we switched from all electrical to adding gas to our house along with a furnace, water heater, air conditioner, and all new ductwork. We had multiple obstacles that most people did not want to take on. Porterhouse helped us come up with solutions and were very reasonable. They were extremely hard working and did a great job with our house. We love our new heating and air systems! We also have a new thermostat that is wonderful. I highly recommend them for any heating or cooling needs!

Excellent. Diagnosed the issue, ordered the part, came back next day to install, and now furnace runs as it should! I have used this company 2 times now and will not call anyone else! 1) they are professional 2) HONEST, wont try to tell you that you need all these extra repairs that others will. 3) PRICE, I've found that their pricing is very reasonable and actually lower than others I've used, but that doesn't mean the service is any less!!!

Description of Work
Heat would not come on when called for.

great, they were very thorough and honest

Description of Work
A/C tune up and clean

Porterhouse Heating and Cooling was very professional and knowledgeable on the service provided. I used them to install my air conditioner unit. Eventhough, the unit was not my issue, they still came out and was able to find the issue and fix it. They were friendly, professional, and reasonably priced. I will definitely use again for any of my HVAC concerns.