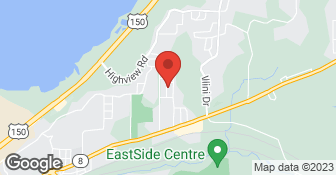 Family owned, insured, and have been in the field for over 20 years. We provide free estimates.

Our house remodel started Jan. 25 with the promise of 1 to 2 weeks due to our smaller size home. This was even after we added a few things along the way. Overall, Jim has terrible communication! We went over a week without hearing anything about our house. We ended up paying for labor that wasn't actually done which he admitted to. There are knicks in the flooring, trim, and baseboards. I have spent a lot of time scraping paint off of the brand new floors. Things that weren't broken ended up broken. They only painted half the ceiling and used two different white paints so the walls don't look complete. While some of the workers did what they could to help with communication and completion of the project, Jim was not great to work with. Thank you to Mary and Matt for keeping in contact after not hearing from Jim for over week! When we did hear from Jim, it was to promise the house would be done tomorrow (this happened at least four different times). There was always some excuse. The original timeline was one to two weeks...it's been a month and the house still isn't done 100%. We do NOT recommend working with Jim. Even after contacting him about these issues, he will not respond.

The owner told me the first time we met, he was member of BBB. This is NOT true. He said after I questioned him that he didn't want to pay the fee to be an actual BBB Member. He told me work would be done in less than two weeks ,it took a month. His electrician, that he highly recommended, wired electrical outlets in the garage backward. I checked them and discovered the problem.The electrician had no clue. Drywall was not finished, the owner didn't show up regularly to see project was being properly done, only on occasion would he make an appearance,and it was for a matter of minutes. His job mgt. is lacking skills. I had to bring problems to his attention. Workers showed up on time the first few days, then there would be only one guy or no one. Communication from owner was terrible. We had a trench dug from the basement of the house to the garage,approximately 40' so new wiring and conduit could be installed.Neither the electrician or general worker insulated the pipe coming into the basement with concrete or foam insulation.That evening, we had thunderstorms.The next morning my wife went downstairs and realized many gallons of mud and water had come through the wiring box,ran all over her washer and dryer,and collected on the basement floor.We called,texted,the owner many times that morning. He never returned our calls. One of his workers showed up in the evening with concrete, and said, "the boss was out partying that day". The worker had to dig up the trench, dig through deep mud ,and add the concrete. We hired our house keeper to come over and clean up the mess, and documented it with many pictures to show the owner. JB&Son's said they were going to pay the clean up, but I found out the owner was going to punish the worker who dug the trench, by making him pay the $120, not the incompetent electrician, that left the house before insulating the outside from the inside conduit, and closing the cover on the electrical box, thus making sure the work was finished. One Friday afternoon, two dry waller's came over to cover seems and add "mud",one of the workers left after 15 minutes and never came back,the other had a large glass of beer. I know because I went to talk to him so I could( look at and smell it). He stumbled around the garage for 30 minutes,left,and was gone for the day. There were two different occasions where a worker asked to use my bathroom,I told them all they could use it. After a week, I noticed a stench of urine to the side and back of the garage they were working on.I live close to many business' , they could have driven 3 minutes to find a place to use.I never knew when someone was going to show up and work. The smell lingered well after the workers were done with the entire project .The electrician would arrive, work for anywhere rom 30 minutes to an hour, and leave. He always had other jobs he was also working on. He would finally show up and forget what needed to be done or where he had left off before going away. I was never his first priority. The general workers said the owner was unorganized and they never knew where they were working until the morning they arrived at their shop. The owner came to get his balance due, I told him the work wasn't finished or done correctly,t hat he was not getting the remainder until everything was properly done. He was very angry and threatened to "come back and tear down everything they had done". I told him," I considered that a threat and was going to call Peoria Police". He never apologized, just shut his mouth. He eventually sent other workers to my place instead of showing up himself. He was afraid of me. Jim, the young owner, is a small time contractor. There is nothing wrong with this, EXCEPT, He must depend on most of his out sourced laborers to do his work , the sub contractors have other jobs, and show up to JB&Sons only when the are done with their primary work. THAT is why the project took so long. THAT is why I never knew who or when anyone was going to show up. THAT is why the communication is so bad. THAT is why the project ended costing more in labor than I was originally told. (It became impossible to keep track of the workers hours they worked because of the non-stop coming and going), and I was paying by the hour for the trenching between house and garage, electrician wiring, and the general worker doing the labor. The owner arrived to get his balance, he thought I wouldn't or hadn't recognized the work that hadn't been done correctly, and only after showing him, he had to call back guy's to finish it properly.This happened TWICE. THIS show's he doesn't have much integrity, or desire to produce quality work for ME or YOU. I suggest you look elsewhere for a contractor. JB&Son's bid the job lower than the others,but the frustration is not worth it.I took the companies advertising sign down from my front yard and threw t in the garbage can. Sincerely, Bill Keister

Description of Work
The provider completed a variety of work for us from replacing shingles, replacing flashing, power washing the house, replacing a toilet, building a door to cover a new circuit breaker box to painting our playground. They completed the work in a timely manner, answered questions, and completed the work to our satisfaction.

We do not only lawn care services and fall clean up, but we have hauling and moving services as well. Please contact us to inquire about those services. Free estimates for those clients inside a 15 mile radius of our business.  …

We do it all from the ground up! Roofing, siding, windows, decks, remodels, additions, painting, tree trimming, landscaping, plumbing, drywall, electric, snow removal, AND SO MUCH MORE! No job is too big or too small. Visit us on Facebook at www.facebook.com/jbandsonsEP and if you like what you see please "Like" our page!

JB & Sons Construction is currently rated 2.7 overall out of 5.

No, JB & Sons Construction does not offer eco-friendly accreditations.

No, JB & Sons Construction does not offer a senior discount.

No, JB & Sons Construction does not offer warranties.

JB & Sons Construction offers the following services: We do it all from the ground up! Roofing, siding, windows, decks, remodels, additions, painting, tree trimming, landscaping, plumbing, drywall, electric, snow removal, AND SO MUCH MORE! No job is too big or too small. Visit us on Facebook at www.facebook.com/jbandsonsEP and if you like what you see please "Like" our page!