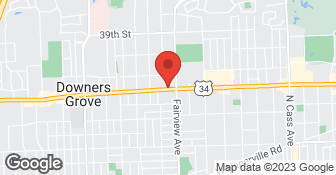 A+ Rated Member of Chicago Better Business Bureau since 1987. Also a member of the Downers Grove Chamber of Commerce. Licensed and bonded as a general contractor with the State of Illinois and all cities and villages we do business in....

Thanks Mike and BLue Sky Builders, they built our awesome garage in 2003. Came out today for some framing and a small siding fix. Maintenance on both garage doors and three new openers. Outstanding !

Description of Work
SOme repairs and new door openers

I originally got a quote from the garage company whose commercials are on tv all the time. Then I did a quick google search and found their reviews and BBB ratings are horrible! My second quote was from Blue Sky. Their reviews and BBB ratings were GREAT! So they came out and gave me a quote. About $8,000 LESS than the first company!!!!!! (and a bigger garage door opening - 8 foot versus 7 foot). Dave the salesman was great. No pressure at all! It took about 3 weeks to get the permits, then the fun began.... First up was the demo crew. They tore down my old garage in about 2 to 3 hours. Extremely professional and cleaned up after themselves. Less than a week later, the concrete guys came. It took 2 days to frame, then pour the pad and apron for a 22x22 garage. About 3 weeks later the framers came. I think it took them 3 days. Another guy came after them to clean up. Within a week, the garage door and gutter guy came. He was here and gone in the same day. A week after that, the electrician came. Took him 2 days. Overall, every crew was on time and very professional. They were there at 7 am. Worked til noon. Lunch. Then left when finished, or at 5 pm. Finally, the inspector came. He was impressed with the straight lines and how everything was done.

they did a wonderful job on my garage. highly recommended

I have such great experiences with blue sky. They made my whole build out process very smooth and well coordinated. Especially thanks to David and Bruce with their professional assistanting throughout the project. I highly recommend this company for garage.

David Krecek was great. Constant contact though the whole process. I feel I was given a great deal.

Description of Work
A new garage after a fire

Even though it's been over a year since we had our garage built, Mike came out & replaced our keypad, no charge when it stopped working. Customer service is the number 1 priority! We love our garage & get compliments frequently.

Met with BlueSky sales and was impressed with their knowledge and ow easy the whole estimate process was. An estimate was e-mailed to me EXTREMELY fast and it was reasonable and comparable to another quote received. We decided to go with the other company only due to better reviews. Top notch sales team at BlueSky!

They were nice to work with and had decent design experience with a custom build like I wanted. I had the layout/blueprints drafted myself and worked with them to obtain what was reasonable. I believed they were on the same page as me and generally saw my "vision". They obtained the desired siding and roofing shingles (brands) to match the house. Windows and entry door were just stock items from Menard's, which also was fine. The demo was performed in 2 stages over about 2 1/2 days due to the amount of work required. Part of the demo was unexpectedly on a Saturday morning, which was not an issue for us. I do wish that at least some of the materials (e.g. metals, electrical) were recycled, as opposed to the whole thing going to landfill. They explained that it is simply an economic reason for not recycling. The dig for the new foundation was performed well with no issues. I found out later during landscaping that the dig came within 2 inches of buried electrical cable! The foundation was poured acceptably but did not have any blankets or other moisture retainer applied, and I ended up watering the concrete for a day or 2. Same story for the garage apron installed a few days later. Not really a problem. The work crew damaged some adjacent concrete in the demo of the original apron, which was not repaired. The electrical conduit installed in the foundation at time of pour was only 3/4" which is pretty much a minimum size for electrical loading. I did not know it at the time but I actually needed about 1 1/4" conduit for my desired electrical loading. Note that BSB was not contracted to provide the electrical service to the garage. The garage build was medium-high quality, and generally in accordance with their spec and quote. The crews worked efficiently and there were no "show-stopper" issues during the build. I helped the poor guy who drew the short straw and was supposed to clean up everything himself at the end. However, nothing is perfect. I had requested a change in the custom garage door color about 3 weeks before the build, and BSB stated that that change would be fine and doable, they would update the supply order. However, when the door was installed, it was the originally requested color. BSB looked into it, and apologized for originally stating that they could do it, but that the door had actually already been ordered by that time and was unchangeable. Also, I requested a ridge vent be installed for the roof, specifying the intent to finish the upstairs portion of the garage as an insulated space. Ridge vents need soffit vents to work correctly, but the soffits were installed with no ventilation, although the material that was used for the soffit is available with a ventilation option that is a negligible upcharge. This material should have been used for the soffit. BSB designer/owner also "knew a guy" who could perform some desired masonry work at the end of the build but this was not followed up on. Overall, this was a quality build, and if the homeowner knows exactly what they want, stays on top of the contractors, and have reasonable expectations, all should go well. Note also that they expect payment when they say that their work is done, even if you have issues with anything that are still being followed up on.

They did a great job. They worked with me and built it the way I wanted it. They had great ideas. They matched the shingles to my roof.

We chose Blue Sky because of their ratings on Angies List and because of the confidence Rick exuded in the company's abilities. We wanted a custom garage, nothing fancy but to match our house. While the garage looks fine, the process of building it was unpleasant and the quality is not great. Rick made many assurances that Blue Sky could do what I wanted. I didn't want anything fancy, just convenient. Once construction started, he was MIA and the contractor knew nothing of the items I had discussed with Rick. Simple things, like the location of the pull-down stairs, were not as Rick has discussed with me. It was as if Rick didn't really know how the garages were built because what he had promised was not possible to build, according to HIS contractor. The concrete was poured wrong and no one noticed. It was not to code and I had to point that out. We paid to have extra lighting and electrical outlets put in, but when the electrical crew came in, they actually threatened me when I told them what Rick had promised me. Only when I told them to stop work and leave did they finally agree that what I was asking for was possible. To this day, the garage door does not work properly . Water fills the front of the garage at the slightest rain and freezes to ice that remains all winter. It is not a pleasant garage to be in and certainly not worth the 30k price tag. I was very disappointed with the work done by Blue Sky. I had wanted the garage to be finished in time for a charity house walk that we were participating in. Rick had told me that our garage would be a priority because of this. It was obviously NOT because often crews were removed from our project to work on something else. I believe that they were over extended at the time. Rick was full of promises before I signed the contract, then disappeared after. I only saw him again when he wanted money.

Gilbert Gutters mission is to provide top quality work and build a relationship that's will last a lifetime! we will treat your home the way we treat our own let's use our years of experience that will add years to your home CALL US TODAY FOR A FREE ESTIMATE  …

Bonded
Insured
All statements concerning insurance, licenses, and bonds are informational only, and are self-reported. Since insurance, licenses and bonds can expire and can be cancelled, homeowners should always check such information for themselves.To find more licensing information for your state, visit our Find Licensing Requirements page.
General Information
Free Estimates
Yes
Eco-Friendly Accreditations
No
Payment Options
Check, Financing Available
Senior Discount
NO
Emergency Service
Yes
Warranties
Ask for details

BLUE SKY BUILDERS INC is currently rated 4.7 overall out of 5.

No, BLUE SKY BUILDERS INC does not offer eco-friendly accreditations.

No, BLUE SKY BUILDERS INC does not offer a senior discount.

No, BLUE SKY BUILDERS INC does not offer warranties.