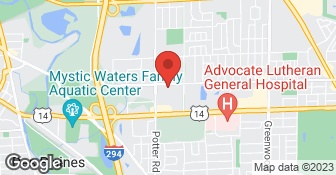 We had hail damage on our siding that our insurance company agreed to fix. I contacted 4 Exterior, along with other companies. We choose to go with 4 Exterior for several reasons. The owner Karol was very easy to work with and knowledgeable on what options I had. His quote was also within the same estimate our insurance company was willing to pay. The other companies were aggressively attempting to have me use their services and trying to have my insurance company pay more for this claim. The team from 4 Exterior that worked on my property did a great job and I am very happy with their work. They were really quick and cleaned up after the job was complete. Karol was on-site to help answer any questions I had during the job. I couldn’t have been happier that I found them from a flyer in the mail and decided to call them. I would definitely use 4 Exterior for any siding, roofing, windows & door needs I might have in the future.

Job went well, owner was very responsive throughout the process and onsite during the job, definitely would hire again, new roof and gutters look great!

Wonderful!!!! Good fast response to our call. Great amazing work done right that day. Really nice people to deal with. We are totally happy and greatful for their service. I can't tell you how happy we are. Thank you Karol Wedziuk!!!!

Description of Work
I had my entire roof replaced. They also had to take off two layers of shingles. They were here on time; I left for work and when I got back at 6PM, they were gone and I had a new roof. They also did a great clean-up job!

Description of Work
We used 4 Exterior to replace our roof and gutters. The roof we selected was a premium architectural shingle, which by its very nature is thicker and heavier than a standard shingle and, as a result, is a more challenging installation. Karol and his crew did a great job and were very attentive to detail. The job was completed within the 3 day time frame that Karol committed to; the crew kept the job site neat and orderly - which is especially challenging when you are removing an existing roof; and the new roof looks great! While the quote we received from 4 Exterior wasn't the lowest they were competitive. In the end I choose 4 Exterior because I saw the quality of work they performed at a neighbor's house, read reviews from other satisfied customers and trusted Karol to be a person of his word - which he is.

When I engage a contractor I look for superior workmanship at a fair price, 4 Exterior, Inc. exceeded my expectations on every level. I had several windows and the siding replaced on my home and it looks better than it ever did

Description of Work
Work performed was superior in craftsmanship. Workers were neat, accommodating, and trustworthy.

Inspection, a pleasant, cordial yet highly-professional assessment of my needs and explanation of what was recommended, as well as a complete, formal proposal, at an excellent price and with far better guarantees on both materials and labor than three other estimates I had obtained, produced on the spot, all happened within an hour at our first meeting, making this an easy decision. The date and time were set within a few days of signing, during which interim Mr. Wedziuk secured and posted on the inside of my front door the required Village permit and answered my emailed questions within five minutes by 'phone and shortly thereafter in writing via another email. His workmen arrived on time, under his supervision (he checked on them often during each of the two days), and the work proceeded smoothly and efficiently after thorough but quick preparation. The men were amazingly quiet, given the nature of this project (I never heard a voice raised either), and the end product is superior; it has also been widely admired (including by my next door neighbor who is, himself, a contractor). There were no surprises at any time, including total costs which were exactly as stated in the estimate--except that as a major home project, this was an overall pleasant experience. I would use 4 Exterior again in a New York minute, but doubt I will ever need him (or anyone else) again for a roof! I have already recommended him for roofing to two friends. I would also like to commend Mr. Wedziuk for his honesty; although the contract provided for an additional charge (per linear foot) for the replacement of any damaged boards in the underlying wood base, he particularly noted to me that all were in very good condition.

The end result is pretty nice and there were no issues. They did a great job. I'd give them an A- overall.

Description of Work
I had them replace all my aluminum siding with vinyl.

We had 4 estimates for our roof, and one of them was an estimate from 4 Exterior. When we met with the owner of the company, we knew from the beginning that we would choose this company. The owner arrived on time and was very helpful while we were choosing products for our roof. After we signed the contract, he told us approximately about the installation date and he called a day before to confirm it. The crew arrived at 7 am and they worked until 4 pm. They were professional and everything went smoothly, just as planned. The job site was left very clean and I would highly recommend 4 Exterior to anyone who needs a new roof.

Description of Work
they replaced roof

Wow - the house looks BEAUTIFUL and not only from the street. When you walk up close you can see all corners are wrapped and you cannot see any nails. Everything was well sealed with a acrylic urethane sealant that matched the color of the siding perfectly! A very professional looking job and I know it will last now for a long time (10 year warranty on labor if I do have any issues). Good to leave me messages as to when they would be able to get to job (actually started a day earlier than committed to). They started about two weeks after I signed. The men were here at 6:50am and started work right at 7am - stayed until dusk. Work ethic was incredible as even when I took them bottled water they didn't take much of a break - just enough time to explain to me what they were doing and why, what was next,etc. - then right back to work. Price competitive with other quotes.

Description of Work
I had 4 Exterior install vinyl siding and then aluminum fascia. They added insulating underlayment over my previous wood siding and several areas needed extra work as they were not flat. TYVEK brand vapor barrier was used to protect walls against water. They installed new (matching the new siding) electrical plates, dryer vent, and blocks behind the lights (light fixtures removed and reinstalled).

Description of Work
Karol redesigned my gutter system that had failed me numerous times and he installed a long section of gutter and he did the work less expensively and more intelligently than any of the other guys I called out to look at it. He is a real good problem solver. I showed him some old rotting wood windows and asked him if he did windows and he said yes and so he them installed five new windows and did a terrific job there too. He is a great guy and really trustworthy. He does siding and roofing too. I now know where to go if I need any of this work done!

When we bought our house we were aware of that we will have to replace the roof. We called several companies for a free quote and finally we found 4 Exterior Inc. Company representative was on time and was very professional. He checked our whole roof and gutters, paying attention to details that other companies had missed or did not want to expose. Thanks to our appraiser’s accuracy and professionalism we were able to save a lot of money and had hassle free repairs. The work was done in one day. After completion of repairs, the whole area around the house was cleaned and left in perfect order. GREAT JOB! THANK YOU!

They did a complete tear off and replacement of my leaky roof. They also replaced gutters and downspouts. They were great from beginning to the end. Karol - the owner of 4 Exterior Inc went over detail of the contract with us and made some good suggestions regarding project. We liked everything he said. His crew was also just over the top with the way they completed everything. I will highly recommend them to anyone.

For nearly 10 years, Affordable Windows has been providing “The Right Solution” to our customers when it comes to windows and doors that will truly set a home or building project apart. As one of a select few companies that manufacturers window and door solutions we offers that unique blend of design, quality and craftsmanship. We are committed to providing our customers with exceptional service while offering our employees the best training best of all and a working environment. Please contact us for a free quote today!  …

M&M is a provider and installer of a broad line of home exterior products including Roofing, Windows, Entry Doors, Siding, Soffit, Fascia and Gutters. Since its formation, M&M has fostered a culture of putting customer satisfaction first, providing quality products and service, competitive pricing and taking the guess-work and worry out of the home improvement process. Celebrating over 37 years of quality, the bulk of M&M business consistently results from customer referrals. M&M accreditation's include the Better Business Bureaus of Chicago and NW Indiana, Owens Corning Platinum Preferred Contractor and the National Association of the Remodeling Industry. M&M has built its reputation as a solutions provider, offering quality products, service, competitive pricing and customer-friendly financing programs .  …

No, 4 Exterior Roofing Siding Windows Inc does not offer a senior discount.

Are there any services 4 Exterior Roofing Siding Windows Inc does not offer?