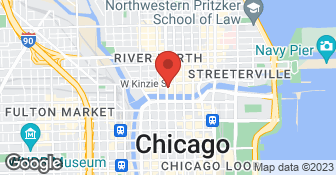 Selecting the right company to move your home can be one of the most challenging endeavors you will ever face. United States Logistics provides comprehensive relocation packages and solutions that are mindful of both your budget and time. Our trained relocation specialists are able to pair you with the right movers, moving vehicles, packing supplies, and the necessary flight, car rental, and hotel accommodations while you wait for your shipment to be delivered. Each relocation we undertake is given the individualized attention it requires in order to ensure a flawless transition anywhere in the world. USL employees are held to the highest standards of professional responsibility, and undergo thorough background checks and screening prior. USL employees are required to attend quarterly training seminars where they learn key skill sets and current regulations effecting the moving industry....

It didn't. The work was never performed. I was promised my deposit back and that was never done either.

The rep John Ryan was very cooperative and friendly in scheduling. However after my deposit was received I had a difficult time getting returned calls. I talked to him once and was told he needed to check in some things and would call back in half and hour the next time I heard from was over 2 weeks. With less than 2 weeks from the move I asked that he be sure everything was in order and wanted status of the scheduling. John got extremely defensive and said that he had spent a lot of time on my account (which is true) and nothing he could do would make me happy. I only wanted confirmation that everything was scheduled and ready to go. He finally said he would just refund my money without any further attempt to complete the transaction. He is suppose to call me back. No word yet.

Description of Work
I scheduled a move from California to out of state.

An absolute nightmare - Do not do business with them!!! I don't want anyone else to experience this, so will post this warning on any and all review sites. We contracted with United States Logistics for a full-service move from Roswell GA to Nashville TN, scheduled for Saturday 1/28/17 from 7-8am. John Ryan was contacted the day prior to the move to confirm that the moving crew would be there the next morning from 7-8am. He assured us that we were on track for the move. We had already paid a $2055.00 deposit for the move. The day of the move, no one showed, no one called, and no one answered or returned our calls. We had to fully pack our entire home and move ourselves before our home closed on Monday 1/30/17 with 2 small children. We suffered much additional expense and stress because United States Logistics did not follow through with their contract. More upsetting still was the untruth received for the reason by e-mail, that they had changed our date for 1/30/17. We did not receive notice of a date change and never would have agreed to it because we needed to be out by 1/30/17. As stated above, we received verbal confirmation on 1/27/17 that the movers would be there on 1/28/17. The 1/30/17 date was never mentioned to myself or my husband until the movers were a no-show, and even then, no communication was received until the next day (1/29/17). Included in the e-mail on 1/29/17 along with this falsehood, we received information that the refund would be processed and we should probably receive a tracking number by 2/1/17. We have heard nothing since, despite calling and e-mailing them. I called and e-mailed again on 2/7/17 24 hours prior to taking further action, because I wanted to resolve this situation with the company, giving John Ryan and Alex the opportunity to right this wrong, and to avoid tarnishing their reputation. Unfortunately, my attempts at resolving the situation have been thoroughly ignored. So I turned to the Better Business Bureau and social media. Hopefully I will receive a full refund. I will post an update if I do.

This mover was a no show for 48 hours after scheduled arrival to pack and load. No proactive communication, voice mail was full and unusable had to be tracked down with email and only then would call back after long delays. Sales rep threatened my wife who was trying to follow up on plans and schedule. Off hours answering service from website telephone number had full voice mail as only contact number. Suspect Angie's ratings are all a fabrication since we found rave reviews on Facebook written by the sales rep with whom we dealt.

Description of Work
A move from Pittsburgh to Chicago, paid by certified check and scheduled in advance.

2. A wonderful job, never did I think that all of my stuff would come back to me with not one thing broken. They have the best drivers out there. When we heard about the storm in Denver coming across country their good judgement told them to push themselves across before it got too rough. when they arrived the gentlemen made it very invasive and worked around the clock it took them really only 4 hours and we had a two-bedroom house with tons of stuff. I?ve never seen any of our previous movers that handled everything so much care. It was a pleasurable experience for me and my family. All we had to do was point where everything was supposed to go and they set up everything on the spot. After a few hours into it I tried to make sure they had stuff to drink and they were well prepared. There was one guy that I recognized from the pickup and he let me know that they always keep the main guy who takes stuff apart to come back to do the assembly. It also made me feel reassured that all my stuff was going to make it back. Nothing was missing from my old house and I wanted to make that apparent to them I was afraid at first but everything was there! So for anyone else out there suspicious or who had a bad experience these guys are my recommendation.

Description of Work
Packing and shipping tracking of the shipment

These guys are amazing! I used other movers before and wasn't pleased, so after some shopping around I found USL on the DOT website when looking for movers and decide to give them a call. John got my a quote of $3,200 to take us from Denver, to Ashburn, VA. The movers came on time and made sure that everything was wrapped up in moving pads and wrap and made me feel very confident about it making there. Overall my move was a smooth one and I will refer them to others looking for movers.

Description of Work
Moved us from Colorado to Virginia.

I enrolled online at a website that had numerous companies call and bid for this relocation. USL contacted me along with at least 7 other companies. I am not sure how many companies really did call me because I lost count after the 100th phone call. I spent a good hour a day for a week deleting voicemail messages after I entered my information on the aforementioned website. USL had a well spoken salesman who clearly explained the moving process and gave me a price of $900.00 that was better than almost all of the other estimates I was given. The move day came and the movers arrived within the hour window the salesman had given me during the scheduling process. When the movers started using shrink wrap to wrap my furniture prior to placing the large padded blankets over it, I was a little concerned that I would get charged for the use of shrink wrap. Needless to say, I didn't end up paying any more than estimated aside from the 60 dollars I tipped the mover. 20 dollars a piece seemed appropriate, but since this is my first time using a moving company I wasn't really sure what was appropriate and the salesman told me that tips were not mandatory and to tip based on how I felt the movers did. The movers finished wrapping up and loading all my furniture within an hour and a half. I didn't receive any phone calls from USL for two days after my furniture was picked up, so I decided to call in myself. The customer service representative who answered phone put me on hold for about 5 minutes, and when she came back to the line she told me that my furniture would be delivered in 3 days between 2 and 3 PM. I thought maybe she had just looked at the contract that the salesman had told me and repeated the information. When I asked her if she was sure, she told me that she personally talked to their "dispatch" department and that the shipment would arrive at the same time stipulated in the contract. Sure enough, the furniture was delivered five days after my original pickup and everything was accounted for and in good shape. Two out of the three movers who delivered my items were the same guys who picked up my furniture. They told me that the third mover was dropped off at local USL hub on the way to me to go elsewhere for the company. At the end I thought because I had already tipped the same movers on the pickup that another tip was not necessary. Not sure if that was the right call but what's done is done. All together, if I ever had to move again I would call USL. I'm hoping that doesn't happen any time soon because moving is no fun at all.

Description of Work
USL did a full service relocation for me when I relocated from Seattle to the Chicago suburbs.

Family owned, family oriented! Honored to serve. Small enough to ensure quality, large enough to handle any move! With over 7 years of experience in the moving industry we know and understand how stressful moving can be. Thats why we strive to make every move as carefree and even enjoyable as possible. Focused on customer care & satisfaction we take great pride in serving people and handling their things. We will treat your home & belongings as we would our own. Give Melendez Moving Inc a call today, we look forward to moving you!  …

We specialize in local and long-distance moving services! We guarantee your satisfaction, and we won’t leave until the job is done right. We pride ourselves on the quality work we provide, while delivering great customer service! Check out all the services we offer below and call -or- click to schedule a free estimate today!  …

H2H Movers, a woman owned and operated business, was founded on the idea that your move should be easy and stress-free. We are the full-service moving company you can trust to take care of your belongings - and you! Here’s how we do it: Competitive prices. You’ll get high-quality, personal service at the best possible price. Accurate quotes. Expect fully transparent pricing from the very beginning. Secure and efficient process. Our entire team’s priority is making your move as smooth as possible. Our trucks are stocked with moving blankets, packing supplies, and everything else needed to protect your belongings and keep your move efficient. People-oriented. Both you and our team matter to us. We work together throughout your move, and we fully train and take care of our team so we can all take care of you! A company you can trust. We value your trust, so we lead with integrity. But don’t take it from us - check out our 500+ positive online reviews!  …

United States Logistics is currently rated 2.7 overall out of 5.