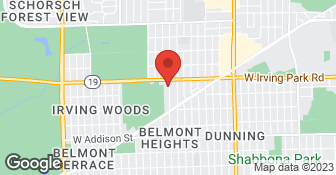 We are a family owned business and have been waterproofing and sealing homes since 1991. We rely on repeat business and referrals. Customer satisfaction is our top priority.

ROMA was hired to waterproof our apartment building. They did excellent work and our unit is now leak free.

Description of Work
Roma waterproofed my entire house and garage. They worked in phases during the winter months and were able to find warm days to get the work done ahead of schedule. They were very professional. They were easy to work with and work was completed sooner than expected. Price was reasonable compared to other quotes I received. I would definitely use them again for any waterproofing services.

It went well. We have a cinder block home that was leaking. After Roma's work we are leak free.

Description of Work
Waterproofed and caulked our home

We recently purchased a house and after moving in, noticed that water was leaking through a window sill. Upon further inspection, all window frames (limestone frames on the outside) had excess mortar on the top ledge from shoddy tuckpointing during initial construction. ROMA responded to our call promptly, provided a free quote, and the 4-person crew was on-site less than a week later. Ricky and his team were responsive to our detailed requests. They worked diligently and provided good work, with attention to aesthetic detail. I would use ROMA again.

Description of Work
Washed masonry on front and back of house, removed excess mortar on limestone ledges , caulked and sealed all cracks in mortar and masonry, painted coping stones.

Waterproofing is simply not working. Inspector has tested the waterproofing about 16 mos after installation. The waterproofing effectiveness is very spotty. Appears to be working on certain blocks/mortar joints, while other areas appear not to be waterproofed at all. Numerous attempts to get ROMA to respond have been unanswered over last two weeks.

Called back the next day. Informed the member that we could not do anything to the building right now due to weather. Asked him to make sure the scupper boxes and gutters were clear of debris and make sure that snow was not accumulating in these areas on the flat roof top. Since that was the area he was complaining about. We will come out as soon as the weather permits and assess the problem. A few weeks later he then told me that the building was spotty and not working in areas around the entire building not just the top. I informed him that if that were the case, which I highly doubt I would retreat the entire building at no charge. A few days later I was told that he did not want us to touch the building again and was hiring somone else. We were never allowed back to verify or rectify the customer's complaint. Never provided inspection report or name of person who did the inspection. It is never a problem to come back and address a customers complaint, weather permitting. In this case, the customer never gave us a chance, even when I said "in writing" that the service would be free of charge.
5.0

It was great. Kristi brought over color samples, and reccomended one that matched our building perfectly. Her crew was fast and on-time. They were clean, never leaving their trash or behind. The work was quite good - it looks very smooth and even throughout the building. Kristi called me every morning to update me on the progress and they finished on their planned date, even though they had to stop for rain a few times. The product they use for sealing is highly rating and has a very long life. Thanks to Kristi for the quality work - we highly reccomended them. Not sure why others have given lower reviews...

Description of Work
We had a split-face block 3 unit building sealed, caulked and generally waterproofed.

It was awful. Their work was very sloppy. There was dark brown caulk applied randomly all over the building. They painted the walls of a parapet with an ugly blue colored waterproof paint they could not be removed. We ultimately had to re-paint over it. Following their work, water continued to come in the building when it rained. We asked them to give us a discount, and they said if we did not pay the full amount by the next day, they would file a lien on our property. We called them numerous times regarding the water, and they did not return our calls. We asked them for the names of the products they used on the building, so we could the work re-done properly, and they refused to tell us the name of the products. We question whether they really applied any water sealent at all. They have refused to return over 10 phone calls. We ended up having all the work re-done by another company. Roma was a complete waste of money and time.

Description of Work
We hired Roma to caulk and seal (waterproof) the split face block of our 3-unit condiminium unit. We were having issues with water seeping in when it rained. Roma assured us they could fix this.

First of all we did not paint anything blue. It was light gray on her parapet wall. Secondly, I never had any dealings with this member of the condo assoc. until the day after we started the job. She called me screaming and she was screaming at the crew that she did not like the color. I brought a color chart to her and she picked two different colors and we put samples. She picked one. When we were done she decided she did not like the color again. She demanded a discount on which she was given. We never received any complaints from anyone else in the building. Almost a year later she called about a leak. She was never available to show us where the leak was coming in on her one wall but just described where it was coming in. So one day from her descriptions we went to the home and from the outside searched the wall for the leak. We found no cracks or holes. We tested the wall and the waterproofing was still working. I highly doubt that this building had to be re-waterproofed because the others in the condo assoc would have at least called me, they had a warranty. Also the refusal to tell them what we used was also not true. It is clearly stated on the estimate, and on the invoice, and on her paid invoice. I was warned about this member of the condo assoc. by her fellow condo assoc members about how difficult she can be to work with, but we still took the job hoping that we could still please her is some way. I really thought we did until I was informed about this submission yesterday. Almost two years after we did the job.
5.0

It went very well. They started the job but it was stalled due the rain. They were very prompt on coming back and starting and then finishing the job.

Description of Work
They came and sealed and culked our condo building for us.

The estimate was received when promised at a very reasonable price. Kristi made sure that all of our questions and concerns were answered. The crew came out as promised and did an excellent job. They even cleaned out my gutters at no charge.

Description of Work
Filled all hairline cracks in mortar joints and treated all block (CMU) surfaces on my biding with "Repel," a totally non-toxic material. Eliminating all leaking in my building.

For over a decade, Bald Eagle Construction has been widely known as the go-to expert for a wide variety of construction projects in Chicago and the Chicagoland area. We’re also proud to be the leader in handling City of Chicago building code violations. From taking care of fixing the issues straight through to dealing with the paperwork. For you that means you not only get the job done to our exacting specifications – you’ll also be assured that any project we start will comply fully with all Chicago Building Department regulations. 11 employees. Uses subs for specialty work. Cost is determined by the job. No travel charges. Ask about Angie's list discount. Award winning.  …

How is ROMA overall rated?

ROMA is currently rated 4.3 overall out of 5.

What days are ROMA open?

What payment options does ROMA provide

No, ROMA does not offer eco-friendly accreditations.

Does ROMA offer a senior discount?

No, ROMA does not offer a senior discount.

Are warranties offered by ROMA?

What services does ROMA offer?

Are there any services ROMA does not offer?