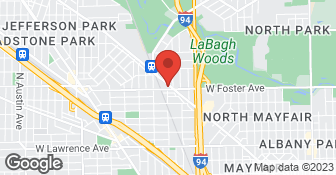 From the first day of demolition until the final door was painted on the outside we had people at our home working. We were able to live on the second floor during the whole remodel so we were aware of what went on everyday. Our contractor Eric was available when ever we called and kept us informed of everything that was happening. He helped us make changes that saved us money and guided us in areas we had no knowledge of. I would not call the people who came workers, they were artists who were very proud of the work they did. From the carpenters building an amazing new stair case to the painter who matched our existed stain exactly it was really interesting to watch the transition. The plumbers and electricians worked miracles because the existing was huge mess! I can not leave out the office staff because they were very kind any time we called and helped with any financial questions we had. I would never go to anyone else to have my home done. From start to finished it was a pleasure to work with Eric and his staff who now feel like part of our family!

Description of Work
We need to gut the basement and first floor completely.

We worked with Peter and Illinois Home Improvement for some persistent leaks that were plaguing some of our unit owners in our condominium building. Peter's team came out and was able to quickly diagnose the problem and assemble a reasonable estimate for proposed repairs. They worked efficiently, and their diagnosis was spot on: these leaks used to be an annual issue for our owners; now its been more than five months and not a single leak has been reported, even during periods of heavy rain. Thanks, Illinois Home Improvement!

Overall well, but we've had a couple leaks since. The firm HAS been there for us with correction.

Although we paid $500 as a deposit for the final proposal, we never started the project with IL Home Improvement, because IL Home Improvement raised the cost of the project substantially, knowing that their prior quote to us was already over budget. Be very cautious with IL Home Improvement. The owner, Eric, is professional, but will take your money. I provided Eric with detailed architectural plans of a deck and mudroom addition, which were drawn by a professional. I received 3 quotes. Eric was the highest. I told him that we wanted to work with him, but that his cost was higher than his competitors. He said that he had been doing this for 30 years and had completed 100 projects like mine. His quotes were accurate, unlike his competitors who will raise their price during the project. I told Eric that we were willing to scale back our project to fit it within our budget, but needed him to tell us how we could adjust the quote. He said that he could look at the details, but would need $500 to cover the cost of producing an itemized quote (I received detailed quotes from the other contractors). When I met with him again, I very clearly communicated that the original price was over budget. He acknowledged my desire, and gave me his word that he would be within 5-10% of his original estimate. I reminded him (several times) that we would scale back our project to hit the budget. Eric's itemized quote came back 20% higher than the original, AND he removed several large items (finish carpentry, painting, electrical installation, tile installation, heated floor, electrical fixtures, exterior locks and hardware) from the quote that he led me to believe were in the original.* If you add all of these back into the quote, except for the finish carpentry and painting, his cost WENT up 40%. With the carpentry, it would have gone up even more. When I asked him why the big price increase, he didn't have a good reason. I asked him if he could get his cost down. He said he would cover the paint costs, and that I could change some materials and get rid of the mud room foundation, which would knock the costs down about 6-8%. In summary, this was a very frustrating experience. *In Eric's first quote, he wrote, "Having examined the drawings and the site for the project I hereby propose to furnish all labor, material, equipment, service and incidentals necessary to perform and complete the work for the project according to the drawings provided by (architect), dated 10/26/2016 (permit) and per Trade Descriptions outlined below. To be fair, I told Eric that I was thinking about doing the trim for our project to save money, and I may have another contractor do the electrical. It is possible that it was a miscommunication and he didn't include this in his first response, however, it is doubtful. I told him I was only thinking about it. Even so, his cost went up at a minimum 25%. I asked Eric for a refund. He would not give it.

Hello Dear Angie's list members. Here is what really happened, timeline of events. 1/13/2017 - Client contacted us requesting an estimate for sizable remodeling project. Details available. 1/27/2017 - Free estimate, emailed. Estimate is valid for 30 days. This disclosure is written on every our estimate. 3/23/2017 - Second on site meeting including licensed electrician. (No charges, thus far) 3/27/2017 - The proposal for Comprehensive project evaluation emailed. Proposal includes non refundable $500 compensation for preparation of detailed proposal for the project. Proposal is accepted on the same day and paid for by the client. 4/3/2017 - Estimate for masonry services emailed. 4/6/2017 - Detailed proposal for the project, including prices for 20 items and list of items not included emailed in fulfillment of the Proposal accepted on 3/27/2017. We have documentation available for review. Peter Z.
5.0

Eric was responsive and on-time for our appointment.

Description of Work
Requested quote for some brick work.

[Member Name Removed], Thank you and thank you for your patience. Peter
5.0

Will continue to consider for future work

Thank you [Member Name Removed]. We look to work with you in the future. Peter
4.0

They are going to do tuckpointing work in about a month, meaning working on brick. Tuckpointing is working on brick and mortar, masonry, that kind of stuff. On price, I don’t have a lot of experience here. They have actually done work in the building next to me. I mean I’m quite familiar with their work.

Description of Work
They are about to do a tuckpointing job for me. I have a quote from them.

Another bad review from someone who did not get free estimate. Please see the pattern of the reviews on our Angie's list site. Bad reviews are coming form people who inquired about free estimates and did not get them on time demanded or because we do not service the area or do not do kind of the service requested. Clients who give us a chance to work for them, usually are satisfied giving A and B ratings. Now. Indeed, our web site says that we service shingle roofs, which is incorrect at this moment. Markets are changing and we reserve rights to manage our business the way we need to manage it. Therefore we inform clients calling about services that we no longer perform, up front, so they can save time and look elsewhere. The web site will be corrected today. Still. Is this a reason to give a "D" review? I leave it to other members to decide. Respectfully Peter Zieba
5.0

Description of Work
In 2012, replaced our whole Home roof, not just the shingles, but frame work do to storm damage. Tough project done during December. Included electrical work in attic and basement. In 2015 -16 re-roofed our garage and major tuck-pointing and concrete work on face of house. Also 2016 did some work on our basement stairs.

Thank you [Member Name Removed]. We are glad you've done business with us and very appreciate this review. Peter Zieba
5.0

We were very impressed with the entire process. Eric is very professional, detail oriented, and responsive. Ursula in the office was a pleasure to work with as well. She always responded immediately to any of my questions. The work crew came everyday on time. I couldn't believe how quick they worked in the cold weather. The demo and framing took 1 month to complete (we only hired for the demo and framing)

Description of Work
We had a second floor renovation. The entire second floor was removed and re-framed. We also had our chimney extended and a new chimney liner. We opened up the stairs to the first floor as well.

Thank you [Member Name Removed]. All best and Happy New Year. We are glad that everything worked out. Peter Zieba. P.S. You made Ula very happy ;-)

Bonded
Insured
All statements concerning insurance, licenses, and bonds are informational only, and are self-reported. Since insurance, licenses and bonds can expire and can be cancelled, homeowners should always check such information for themselves.To find more licensing information for your state, visit our Find Licensing Requirements page.
General Information
Free Estimates
Ask for details
Eco-Friendly Accreditations
No
Payment Options
Check
Senior Discount
No
Warranties
Yes

Illinois Home Improvement Corp is currently rated 4.6 overall out of 5.

No, Illinois Home Improvement Corp does not offer eco-friendly accreditations.

No, Illinois Home Improvement Corp does not offer a senior discount.

Are there any services Illinois Home Improvement Corp does not offer?