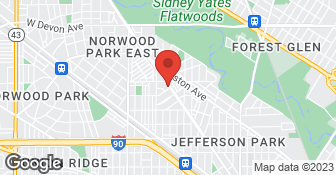 Holman & Nachtwey Co., Inc. was incorporated in 1973! Our company ALWAYS HAS BEEN and ALWAYS WILL BE a family owned and operated business. 47 GREAT YEARS AND 3 FAMILY GENERATIONS LATER… Our family business still runs strong, and continues to grow and be one of the leaders in our industry. Contact us today at 773-478-8780....

They were good, professional workers. They came in, did a good job, and cleaned up well when they were done. I would definitely use them in the future.

Description of Work
They put in a 73 foot gutter and installed/sealed a rubberized flashing on roof.

We chose not to use Holman & Nachtwey's suggestions because we hoped the former roofer would be willing and able to make the corrections himself. So far that has not happened, and the condo owner who negotiated the deal with the roofer is out of town on an extended work assignment.

Description of Work
Provider gave an appraisal of roofing that another company had performed in 2012, along with services Holman & Nachtwey would perform to correct what was wrong.

Late Feb. 2012 I noticed an leak from my ceiling. I found Holman & Nachtwey roofing in the yellow pages. The next morning Mike came out to evaluate the situation. He told me that the problem was from age and a poor patch job. He suggested a complete tear off since there was already 4 layers. Within a 24hrs a crew was at my home and the roof was gone and replaced with a brand new one. At no extra charge they repaired a few seems in my gutters. Great people who made a nightmare into an easy situation.

I worked with father and son, Mike & Marvin. They gave me a good fair quote and performed the roof replacement all in 1 day. What I liked about them, is tha tthey were very patient in answreing all of my questions, even going as far as expalining to me how the industried warranties worked. Roof looks great, they installed some ridge venting that should extend the life of the roof. I would reccomend HOLMAN & NACHTWEY to anyone looking for a new roof.

Even though I am satisfied with the appearance of the final work, it was not easy to get to that point. When we did extensive remodeling on our home 10 years ago Holman & Natchwey installed the new roof. They were referred by the contractor and we were happy with their work then so we called them again for this work. However, I feel that we should have gotten more estimates because the price seemed really high for the amount of work done. Not only that, at every step we had to ask them to redo the work because it was not done well the first time around. At the exterior front of the house where the top few rows of bricks were replaced, the spacing of the mortar did not match the rest of the house and it was very obvious. Mr. Holman came out and looked at the work and agreed so they rebuilt it. Then, for the washing, we couldn't tell that they even did anything to the brick. So they did it again using a stronger solution. For the cementing up the sides of the building it seemed like portions of it was a very thin coating that did not adhere well to the brick and was sloppily done. So they did it again more thoroughly and neatly. For the amount of time they spent on the project and the number of guys involved I definitely felt like I overpaid, and it was a hassle with all the rework that had to be done. It seemed to me that they took shortcuts and we had to really be on top of them to get the work done. And when they came around to get the check the man was very gruff and didn't seem very professional. Overall they seemed to have the potential to do good work but just didn't try very hard.

H&N did a complete tear-off and new roof about 10 years ago. Recently something was causing a wet spot on my wall. Mike sent out a worker and did a "Tune-Up" to the tar and flashing where the chimney met the roof. This was No-Charge. No more leak ! At the same time I had him remove an abandoned soil stack which was the billed portion. He is currently addressing a leak over an exterior doorway which I fully expect to be fixed and resolved to my full satisfaction. I'm very happy with their work.

Description of Work
A "Tune-Up" to the tar and flashing where the chimney met the roof. Remove an abandoned soil stack elsewhere on the roof.

Sharon and Mike were very helpful about suggestions on color, design and other roofing maintenance possibilities. The workers came on time and were professional. They put tarps over the house, and the house next to me to protect it from any debris. If you want the job right go with Holman and Nachtwey!

Description of Work
They did a complete roof tear off of three layers and re-roof with architectural shingles (mission brown colored shingles) on the house and garage.

THEY SERIOUSLY OVERCHARGED ME FOR THE ROOF. WHEN THEY TORE OFF THE OLD ROOF IT LEFT SOME OF THE SIDING EXPOSED RIGHT ON THE FRONT OF THE HOUSE AND IT LOOKED HORRIBLE! THEY REFUSED TO FIX IT! MIKE HOLMAN CAME OVER AND HE WAS VERY INTIMIDATING AND THREATENING WHEN CONFRONTED WITH THE PROBLEM. HE SAID THAT HE WOULD REPAIR IT WHEN WE PAID HIM AND HE HAD A VERY HOSTILE ATTITUDE ABOUT THE WHOLE SITUATION. IT WAS A HORRIBLE EXPERIENCE. THE ROOFERS LEFT THE JOB ONE DAY WHEN IT STARTED RAINING AND THEY DIDN'T EVEN PUT A TARP UP! RAIN CAME RIGHT IN OUR BEDROOM AND WHEN WE TOLD HIM HE WAS VERY ABRASIVE. WHEN DEALING WITH HIM I WAS ALMOST AFRAID. I RESOLVED IT BY TELLING HIM THAT WE WOULD GET AN ESTIMATE ON WHAT IT WOULD COST TO FIX THE WATER DAMAGE AS WELL AS THE HORRIBLE COSMETIC JOB ON THE FRONT OF THE HOUSE AND THEN WE PAID HIM THE DIFFERENCE. HE LEFT US ALONE AFTER THAT.

Description of Work
RE-ROOF. THEY PROMISED STAINLESS STEEL EDGING ALONG WITH MANY OTHER ABOVE AND BEYOND THINGS AND THE THINGS THEY ADDED REALLY DID NOT DO WHAT THEY PROMISED.

Flat roof specialist | Family owned and operated since 1960. We specialize in flat roofs shingle roofing and Metal roofing and aluminum roof coating and gutter repairs and installation and emergency repairs we do full installations and repairs on all types of roofs ! . We do free estimates contact us for more information all are work is guaranteed 10% off for senior citizens first responders and veterans and Angie’s list customers are #1 goal is our customers satisfaction.  …

It is our mission to provide excellent workmanship and complete customer satisfaction from start to completion of a project. We take great pride in our experience, expertise, quality, and customer service that we provide to meet the consumer’s needs. In order to understand the needs and expectations of our customers, we take great care to work and communicate with every customer in a professional manner. Our reputation is based on service, safety, and quality, regardless of how large or small the job. Quality Roofing and Masonry is a 3rd generation owned and operated company. All our work comes with a minimum 6 month warranty on labor and materials. We offer discounts for seniors, military, fire fighters and law enforcement. We offer short term financing for qualified customers, certain restrictions apply, must meet minimum requirements. We also offer holiday and seasonal discounts throughout the year.  …

How is Holman & Nachtwey overall rated?

Holman & Nachtwey is currently rated 4.3 overall out of 5.

What days are Holman & Nachtwey open?

No, Holman & Nachtwey does not offer eco-friendly accreditations.

No, Holman & Nachtwey does not offer a senior discount.

Are warranties offered by Holman & Nachtwey?

What services does Holman & Nachtwey offer?