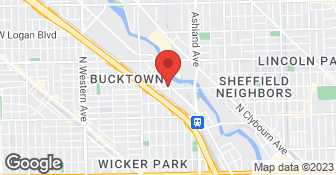 Our installers are all CSI's (Certified Silestone Installers) who are background checked and carry employee identification. Silestone Quartz and SenSa Granite both carry a 15-year warranty. Free estimates by phone or fax....

Kitchen And Bath Cabinets Center!!! Let Us Help You Build The Kitchen And Bath Of Your Dreams!!! Out Cabinets Have A High Quality, Durability And The Best Value For A Great Price! We Help Customers With Every Step Of The Process - From Planning To Installation And Beyond! Save 20% - 50% Off Retail Price Cabinets (Compared With Big Box Stores). Come By Today And See for Yourself!!!  …

Chicagoland's Most Reliable Home Improvement Company servicing the City of Chicago and most suburbs. We specialize in full remodels of kitchens, bathrooms, condos and basements. We do not offer repair work or partial remodels.  …

Description of Work
Marble in our bathroom needed a lot of work. It looks beautiful now, thanks.

Overall, we had a very good experience working with CounterEdge and our salesman Bob. After receiving our kitchen drawings he quickly responded back to me with estimates for two different colors in both granite and silestone. He was very gracious with his time in showing us various options for countertops within our budget. Once we ordered our pattern they were able to schedule a field measure within the next couple of days. We were so excited. The field measure went smoothly - the staff was professional, friendly and worked efficiently. Unfortuately, we got a phone call the next day that the product we had chosen was on back order. This was definitely a big disappointment - I was at that point without plumbing in the kitchen. Although Bob and I talked about trying to expedite the fabrication end once the product was delivered they were unable to give me confirmation of exactly when the stone would be shipped to their warehouse. We opted to change patterns. Bob met me again to review options. Once we moved forward with the new stone, our countertops were delivered and installed within 10-14 days. The installation team worked quickly, professionally, and cleaned up once they finished. The countertops do look good but I think we would have liked the first choice just a bit better (but I was anxious to get my kitchen sink working again). I think we got a very fair price - the bill was less than the estimate - but they did charge me $30 more than the bill. They did quickly refund the overcharge but it still required 2 phone calls on my part. Despite the two issues, I would use them again and I would recommend them. I would have easily given them an A rating had it not been for finding out the product was out of stock well into the ordering phase and the random overcharge.

Description of Work
Once the countertops were selected, CounterEdge installed them into the kitchen. It looks great.

First, apparently the company is now called "counter edge." Per my salesman Bob, the company was purchased by consentino, the parent company of silestone. I contacted Bob, and I emailed a drawing that I made myself (it's not hard, I don't really have experience in this), and I was emailed a proposal - pricing was very good, so I went ahead. I told the salesman that I needed the counters very soon, and he promised to do everything he could to expedite my order. So field measure was scheduled for 2 days later, and the guy (Mark) was excellent - lots of helpful advice, and he went over everything carefully with me, so there wouldn't be any surprises. Counters were then installed 6 business days later - again, the installers did a great job. The one seam was practically invisible.

Description of Work
Fabrication and installation of kitchen and bathroom silestone countertops.

Very well. Bob made sure the baton was passed smoothly. Measurer, Fabricator, Installer.

Description of Work
Measured my kitchen. I went out to Mundelein to pick out the granite slab. The slab was cut and installed. My old laminate countertop was removed.

End result is good, but there is definitely a disconnect between sales person (Paul) and field project managers. Rep. indicated that removal (old counters) and installation (new counters) would be done in one day, which turned out to be incorrect according to the project managers/measurer/scheduler. Also, size of overhang had to be less than sales rep. indicated (unless I added brackets. It cost me additional money for plumbers to come and disconnect/reconnect sink to keep kitchen functional between tear out and install, which was annoying and expensive. Project managers (Fiona, Bob), Juan the measurer and installers were all very knowledgeable and responsive, esp. with scheduling around my handyman who had to perform some work prior to the install. They did send me a refund after the job for a partial overpayment (estimate vs. actual materials/labor), which I felt was very honest and ethical. Overall pricing was very good, and they offered a cash upfront discount.

Salesman was helpful and the warehouse employees were excellent. They went out of then way to help choose the slab of granite. The preinstallation measurements and installers were efficient and very professional. The office personnel however were not knowledgeable and had difficulty with scheduling. They indicated I that I would need to remove sink for measurement, which was inaccurate. They also changed installation date at the last minute claiming payment wasn't provided when the credit card information appeared on the emailed signed contract. Overall, however we are pleased with the product and installation.

I placed my countertop order at the Cicero location. Both Ron, my salesman, and Gary, my project manager were knowledgeable and responsive. My kitchen was measured on a Monday and countertops were installed the following Tuesday. I was definitely impressed with the speed of service.

PRICE WAS ABOUT THE SAME AS MOST OTHER GRANITE CONTRACTORS. BUT, THEY WERE ABLE TO CUT A VERY LARGE PIECE OUT OF 1 SLAB, SO THAT WAS NICE. THERE WAS SOME CONFUSION DURING MY INSTALL BUT THEY QUICKLY RESOLVED THAT, AS WELL AS A COUPLE OTHER ISSUES WITHOUT ANY HASSLE. THEY REALLY MAKE SURE THAT THE CUSTOMER IS HAPPY WITH THE WORK. THE ONLY DEMERITS ARE FOR PUNCTUALITY AS THEY HAD A HARD TIME GETTING TO MY PLACE ON TIME.

THEY WERE VERY ACCOMMODATING IN GETTING THE APPOINTMENT. I ESPECIALLY APPRECIATED THAT, DUE TO THE CONTRACTOR, WE HAD TO CHANGE THE APPOINTMENT AT THE LAST MINUTE AND THEY WERE VERY RESPONSIVE TO GETTING OUR WORK DONE AS NEEDED. THE WORKERS WERE VERY EFFICIENT. THEY ACCOMMODATED THE WALLS THAT WERE NOT EXACTLY EVEN. WE HAD TO CHANGE OUR ORDER BECAUSE THE ORIGINAL ORDER HAD NOT COME IN YET FROM SPAIN, SO LUCKILY THEY HAD ANOTHER OPTION THAT WAS THERE AND AVAILABLE AND WOULD WORK WITH OUR TIME LINE. THEY RUSHED IT TO BE FINISHED IN ORDER TO MEET OUR NEEDS. I WOULD USE THEM AGAIN, THEY DID A GREAT JOB.

VISITED THE SHOW ROOM AND HAD A VERY POSITIVE EXPERIENCE WITH SALES PERSON-KNOWLEDGEABLE, INFORMATIVE, PROMPT IN RESPONSE. MADE THE DECISION TO PROCEED AND WHEN MY (FEMALE) CALLS TO SCHEDULE A MEASUREMENT VISIT WERE NOT RETURNED, MY HUSBAND CALLED AND DID GET A VISIT SCHEDULED. REQUIRED CURRENT COUNTERTOP AND SINK TO BE REMOVED, WHICH WE HAD OUR CONTRACTOR DO. ARRIVED LATE, COMPLETED THE MEASURING AND RECEIVED CONTRACT TO PROCEED. ABLE TO LEAVE CURRENT COUNTERTOP IN PLACE AND RE-INSTALL THE SINK DURING 2 WEEK PERIOD WAITING FOR NEW COUNTERTOP. PRIOR TO EACH INSTALL VISIT, NEEDED TO REMOVE THE SINK. INSTALLER(#1) ARRIVED LATE, INSTALLED 2(OF 3) PIECES, ONE WITHOUT MEASURING & SO INCORRECTLY, AND MADE THE SINK CUT TOO LARGE, SO HAD TO REDO. ABOUT A WEEK LATER, CAME TO CORRECTLY INSTALL MIS-MEASURED PIECE (THEN ONLY DONE CORRECTLY B/C OUR CONTRACTOR ON SITE) BUT HAD NOT FINISHED SINK PIECE CORRECTLY. RETURNED FOR INSTALL #3 AFTER ONE ADDITIONAL WEEK. DID CREDIT OUR COST FOR 2 ADDITIONAL

Description of Work
REPLACED NON-GRANITE COUNTERTOP WITH A NEW, GRANITE ONE.

Fabrication and installation of Silestone Quartz, SenSa Granite, ECO, Prexury, Marble and more. Residential & Commercial Countertops for kitchens, bars, vanities, desk/table tops, tub decks. We're the only retail store in Chicago owned by Cosentino, which is the manufacturer of Silestone.