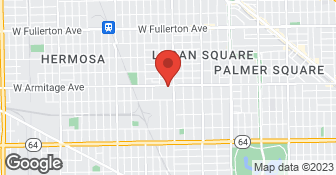 I have been using them for a while. The gentleman I use is Hiney, and I have requested him several times and he has done several projects for me. I just received an email from that they were getting out of the Homeowners and going into more like apartment building maintenance. They are difficult to get hold of.

Description of Work
I use them for house maintenance. They have hung a ceiling fan and an exhaust fan in my bathroom. They have put up shelves in my front room and done drywall repair.

HIDE YOUR VALUABLES! DO NOT USE THESE GUYS! Edgar bait and switched prices on me when the first job I contacted them about. He raised the hourly rate saying he would have to do the work and charge me more as a consequence. On the day of the job he sent someone else without any advance notice and did not revert to the original pricing (when the reason for the increased pricing was for specific personnel). They also stretched out the hours unnecessarily by at least 30%. I wasn't happy about this, but was glad the work was done. After a few months, I called them about another project, expecting I would receive the regular hourly rate. And if so, when spread over two projects, the impact of the cost increase he hit me for on the first project wouldn't have been that bad. Well, Edgar proved to me that his standard operating procedure is to bait and switch on price. He dragged his feet on supplying me with the estimate, and when I received it, the hourly rate was twice as high as what we had discussed and the estimated hours were more than twice as long as the other estimate I received. And not incidentally, when Edgar was here for the estimate for the second project, he encouraged me to tear down the mirror and lighting and open up the wall in the guest bathroom to get started. I did not do that and with the benefit of hindsight, it is clear he wanted to create a dependency on getting the work done and a sense of urgency, so I would be more likely to agree to his inflated prices and inflated hours. I would not recommend using these guys. From my experience with Edgar, he will find a way to rip you off. I guarantee you he will not challenge this review because every word of it is true.

Rob West Plumbing is a full service, environmentally responsible shop. Licensed, bonded & insured, we handle virtually any plumbing issue with uncommon courtesy and professionalism at a price we think you'll like. Experts in the environmental aspects of water management, disposal & conservation, Rob West Plumbing, Inc. keeps your property safe and plumbing systems operating smoothly. May contact through email. WE ONLY DO WORK IN THE CITY LIMITS OF CHICAGO!! http://www.robwestplumbing.com  …

Flexible Services Construction & Remodeling. is currently rated 2.5 overall out of 5.

No, Flexible Services Construction & Remodeling. does not offer eco-friendly accreditations.

No, Flexible Services Construction & Remodeling. does not offer a senior discount.

No, Flexible Services Construction & Remodeling. does not offer warranties.

Are there any services Flexible Services Construction & Remodeling. does not offer?