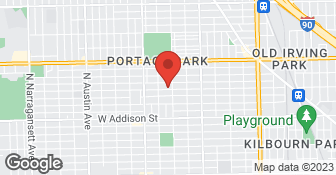 Cutting Edge Refinishing specializes in bathtub and tile refinishing. We bring old fixtures back to new....

Everything went great from start to finish. They are very responsive and work was done in timely and professional manner. Pricing was very reasonable.

It went great! Tony and his associate showed up right on time. They were courteous and professional and answered all of my questions thoroughly. They removed the old bathtub liner without damaging the tub or the tile walls. The original tub underneath was blue, but Tony refinished it with a nice, bright white. My bathroom looks brand new now!

Description of Work
In February 2015, Cutting Edge was recommended by our realtor to refinish our bathtub and shower in our master bath. It took two men about 3 1/2 hours to complete the job. They told us not to use the bath or shower for 3 days. We waited three weeks before using them. The shower stall started peeling in 5 separate places soon after using the shower. (We had been told the work was guaranteed for 2 years.) We called three times (leaving messages) before getting through to them. When we told them the shower was peeling, they asked for us to send pictures via cell phone, which we did. They never called us back or answered our calls. A waste of $870.

Wrong company. This was not done by us. Sorry
3.0

When I called for service he was very quick to quote a price and schedule. I was surprised since a previous service provider had refused to do the job because of a permanent shower door. the service was supposed to be in the morning, and I finally went out to run errands, and got a call around 2 pm that they were on their way. I questioned if there was enough time to complete, but he said it wouldn't be a problem. he arrived, did the job, was fast and clean. but when he was ready to leave, he showed me the tub, still taped and papered over. He said it was still wet, and I could remove it later. At that point (thank goodness) I asked him whether the tub had been caulked. He said and quot; did he not tell you caulking was extra?and quot; I told him no, and he made some remark like and quot;he does that all the time.and quot; Ha removed the taping, and caulked the tub. there are several obvious rough spots and bubbles tha need to be touched up. I did call a few days after, and was told I should give it time to cure and smooth out. These spots aren't going away, but I'm not sure I want this company back. frankly, I don't know that I want this published, and this experience makes me question the value of Angie's list as a resource.

I had contacted another Angie's list provider and he had refused my job based on concern over his ability to work around an installed shower door. I called this company, spoke with a man on the phone who said it wasn't a problem and gave me a $275 quote sight unseen. I thought the tech would arrive in the morning. Didn't hear by 1 pm so thought they blew me off or I misunderstood. He called me at 1 pm said he could be there by 2 and could do the job. He arrived, was very polite and thorough. But, as he prepared to leave, showed me the tub, said it was still wet, and I could pull off the masking later. I said and quot;What about the caulking?and quot; He said and quot;didn't my boss tell you it's extra. He always does this.and quot; He agreed to hang around and take off the masking and caulk at no additional cost. I'm not sure if this was the tech wanting to leave, or if this is actually the company policy. But having to request caulking for a tub refinishing is like asking for a plate to be included with an entree at a restaurant! The company claims a 5 year warranty but there is nothing in writing. Hopefully the work holds up.

They are very easy to work with and their prices are very reasonable. I use them 5 to 6 times a year. They always do a grate job!

Description of Work
They did some refinishing to my bath tub.

Cobblestone Remodeling is Chicago’s most reliable design-build remodeler specializing in kitchen, bath, additions, windows, siding & more! Whether you’re interested in creating a beautiful bathroom, or your dream kitchen, we guarantee you the highest quality at the best price. Our team of qualified expert designers will give your vision personal attention to make your aspiration come true. We strive to design and build all of our projects to exactly what you envision, that is why our complimentary estimates are personalized and tailored just for your project. We put customer satisfaction at the top of our to-do list. Call (773) 661-0606, visit us online at CobblestoneRemodeling.com, or email us at info@cobblestoneremodeling.com to set up an appointment with our experienced designers. Cobblestone Remodeling – Chicago’s #1 choice for top quality remodeling for over 30 years!  …

Celebrating 45 years in business.We provide fine Italian craftsmanship for all of your tiling needs! We are a family business and we personally do all of our installations and take real pride in it. We Do not use sub contractors! The only tile installers that you will deal with are Nino, Tony, or Vito. This is the only way to control the quality of our installation. There are no other tile contractors in Chicago with generations of experience on their side. We provide our installation services in Chicago and the surrounding suburbs. Please give us a call for a free installation estimate. Thanks, Nino, Tony, and Vito  …

Cutting Edge Refinishing is currently rated 3.7 overall out of 5.

No, Cutting Edge Refinishing does not offer a senior discount.

Are there any services Cutting Edge Refinishing does not offer?