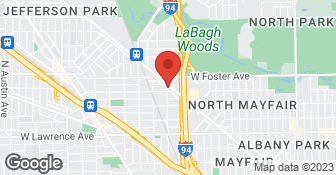 20 EMPLOYEES. NO SUBS. COST IS DETERMINED BY THE JOB. NO TRAVEL CHARGES....

"A Project Away From Perfection", Quality Siding, Windows, and Roofing projects delivered by experienced craftsmen! Our experts are seasoned with over 20 years experience in exteriors, and residential remodeling. We are fully licensed, insured, and bonded as well as fully accredited as a Family, Owned and Operated business in Villa Park, IL. Call us today and schedule a FREE in-home estimate for your next project!

Monapix Corporation is a family-owned and operated business. When we say family, we mean that we treat our customers as members of our family and we take care of them. Our philosophy is to make you happy with the quality of service while giving you the best value. All our staff is highly trained, with years of experience in cleaning business. We use the highest quality products available and are fully equipped to handle any job. Needless to say that we are fully bonded and insured. We look forward to see you in the future.

3 EMPLOYEES. NO SUBS. CHARGES AN HOURLY RATE. NO TRAVEL CHARGES. Northsouth Masonry has been established as a corporation since 2001. We specialize in masonry restoration, grinding, tuckpointing and brick replacement on residential and lowrise commercial properties. We rebuild chimneys, parapet walls and replace lintels,We install glassblock windows we do caulking and waterproofing all to the nighest industry standards.We also do concrete steps and walkways. Dan has 27 years experience in the industry and spent many years working in Boston and Chicago high rises. He is a journeyman mason and holds a city of Chicago masons licence. Northsouth does not sub the jobs to other companies. Our own crew does each job and have been with us for over 10 years. We provide free estimates but charge a flat $15.00 charge for second trips to the same location if the job is outside Chicago. We have been on Angies List since 2001 and have received many super service awards over the past 14 years.

I called in early November to get an estimate. Heard nothing so called back in mid-November and they claimed not to have my information. Called back toward end of November and was told they had been out to my building and were waiting for a price on materials before they could give me an estimate. Again heard nothing. Called again in December and was given cell phone of a person who was identified...

Bery good. No complaints from neighbors

Team did a great job through the project. Tore off old roof, repaired rotted substrate wood, installed new slate roof, did extensive copper metal fabrication to match old deteriorated painted metal patterns on a large 1890s brownstone. Long project (3.5 months) but team warned us it would take that long up front. New work looks fantastic and was complicated (turret was pine-cone shaped so they had...

DESCRIPTION OF WORK
Conrad installed complicated slate roof on front of house and turret, completed extensive metal fabrication (new copper gutters, dormers, cornice, bay window covering and finials), and repaired damaged wood. The team (Casey and Sebastian) were very communicative throughout the process / gave candid opinions and options on pricing. We are very happy with the outcome - house looks completely different after they are finished.

It was okay. They did alright. I have used them before. The only problem I had this time was I didn't know they were finished. They left. You should let someone know if you're done and you're gone.

DESCRIPTION OF WORK
I have used Conrad Roofing Of Illinois Inc.

They were punctual, coordinated with other tradesmen, were professional, reliable, took pride in their work, involved us in decisions as to look as appropriate. We would use them again on such a large job where cosmetics were a concern.   The cost was under six-figures. Work was performed as estimated/in line with budget.

DESCRIPTION OF WORK
Conrad added copper to our third floor exterior (replacing stucco with some water damage issues) and installed a new roof on the front half of our home, also added outside trim around new windows (separate vendor for the windows), did some exterior work on the 'Chicago roof' on the back half of our home.