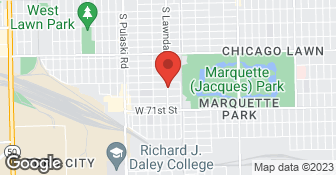 RISING TO GREAT HEIGHTS TO SERVE YOU! 8 EMPLOYEES. NO SUBS. COST IS DETERMINED BY THE JOB. NO TRAVEL CHARGES. NO SERVICE FEES.NO BULL,. ADDITIONAL PHONE NUMBER: (773) 655-9227. MAY CONTACT THROUGH EMAIL....

They came to inspect a couple of chimneys we believed were non-functional. They were able to schedule something quickly, did a thorough job at a fair price, and we were happy with their work!

Thank you for your kind words
5.0

Mirna Garcia came to inspect the chimney. She did an outstanding job explaining the problem and patiently explained the steps necessary to replace it. She scheduled the work on an expedited basis and her team showed up on time. The team was also very willing to explain the work they were doing. They took making sure that replacement shingles closely matched the rest of the roof. They worked efficiently and did a great job cleaning up. Everyone was a true professional and friendly.

We had chimney work done by Chimney USA, Inc. They did a good job. We had 2 chimneys repaired as well as flashing over porch area. Mirna was great in setting things up. Chris W. and Rafael were great at doing the work.

Thank you very much for your review
5.0

It went well. The company was efficient and competent.

Description of Work
Cleaning and inspection of fireplace

Thank you for the kind words Keep us in mind for any chimney maintenance services
1.0

Prior to providing this estimate, the company inspected and swept the chimney, removed debris and inspected the flue pipe on the roof. This was a separate job which we paid for and it solved the problem we were experiencing. However, we were alarmed and dissatisfied with the estimate for the job mentioned in the above description. We decided to get more estimates and weren't surprised to learn that the estimate far exceeded other estimates. It never fails to get other opinions before going with a company you trust and have used in the past. In our opinion the only rating we can give for this excessive estimate is a F.

We thank you for keeping our company in mind to fix the immediate problem/blockage you had in the chimney and that we were able to respond on a much quickly manner for the customers safety involving carbon monoxide leak Sad to hear you found a Cheaper price on the estimate we provided for future work But you as a previous customer you know that Our company is Fully Insured as required by law including workers comp, licensed and bonded, in which our prices may vary from our competitors that don’t carry insurance or are just off the [Member Information Removed] vendors,repairman or handyman The quality of our work,the time and dedication we spend in everyones home is our priority to make sure our customers are well educated on repairs needed and overall chimney safety Our goal is your safety We thank you for your business Chimney USA is here in case you need us in the future
5.0

Workers arrived on time, gave me a complete overview of the work to be done, protected the property from any potential damage that could be done to the during chimney installation, and answered questions and addressed all of my concerns. They provided photos during the installation and when the job was completed. The company and the workers kept the lines of communication open during the entire time making it easy to understand the process and the procedures they used to complete the project. As the end all garbage and debris was removed and the surroundings were left in tidy and appealing condition. The project was completed in a professional and timely manner.

Workers were professional from their communication to quality of work. The two man team worked seamlessly. I was at work and my son was able to send me pictures to see damage before deciding to go though with the work. Workers explained all details pertinent to the warranty and maintenance. I don’t regret paying up. Good workers, honest people, happy customer. Thank you Mirna and crew!!!

Description of Work
The cap on my chimney broke if during the recent high winds and needed a replacement. The thorough inspection revealed the clay liner was seriously compromised. There was no crown and my water heater was showing signs of some wear due to heat not venting properly. A new liner, crown, cap and vent pipes from heater and water heater and the mason work that it involves was done.

Thank you for allowing Chimney Usa to service your chimney
5.0

Work was professionally done. The heat in my house was off for about s month. We couldn't figure out what the issue was. The gentlemen from Chimney USA came out and changed the liner in our chimney, and now I have heat again! Thank you!

had been having issues with birds getting into the basement of my building. I wasn't sure how they were getting in but knew they would find themselves stuck in either the chimney cleanup or flue to my boiler and/or water heater. I had a wildlife company come out initially and he recommended I have my chimney inspected as he thought that would be the likely source of entry. I did a Google search and came across Chimney USA. I spoke with Mirna and explained my situation and she knew exactly what I was talking about. This woman is incredible. She was so thorough in explaining how and why situations like mine happens as well as knowledgeable about how the chimney system works, the components and what part they play, how to diagnose the issue, options for repair, and so forth. I mean she really knows her stuff! Needless to say, I set up an appointment to have chimney unblockage, cleaning and inspection done and she and her team did a wonderful job. They were very professional and arrived within the window of time given (9a-12). I was surprised because I wasn't expecting her to come but I'm glad she did. They worked with attentiveness, safety, and care as they wanted me the customer to have a knowledge and understanding of what was going on as they moved through the process. I was even able to go on the roof while they inspected the chimney cap which resulted in them adding a protective layer of mesh around the existing cap. The cap appeared to be the source of the problem. Anyhow we explored other options for chimney caps as well as added a cap to another opening that appeared to be an old chimney I didn't even know existed. And just to be clear, it was my idea to add the other cap and not a sales pitch to try and make more money. I wanted to make sure I was taking all precautions to avoid anything else getting into my building. Anyhow, all in all Chimney USA is a great company. I would highly recommend them if you are in need of any work related to the chimney, roof, issues with animals getting into your home, and so forth. The only reason I didn't give 5 stars is because I felt they were a little pricey but otherwise good company, good people.

Chimney USA Inc. is currently rated 4.8 overall out of 5.