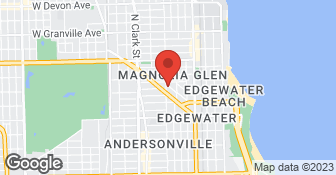 Chicago Porch Authority has been Chicago's most trusted contracting company since 1991. We specialize in constructing, repairing, and restoring porches, backyard and rooftop decks, and balconies in the Chicagoland area. From constructing high rise commercial projects, to fixing code violations, CPA services all types of decks and porches....

Frank did an excellent job in replacing our old worn out porch with an excellent new one. He had a number of good recommendations around design of the privacy wall and was very clear in communicating progress throughout the project. When a few adjustments needed to be made at the end he was very accommodating to support. I highly recommend his services for anyone looking for similar work.

Thank you so much [Member Name Removed]. It was such a pleasure working with you.
2.0

The came and did a very comprehensive analysis of the porch and said they would provide an estimate within a week. I had to email to ask for the estimate, then it took a coupe of days and they reported a high figure with no details. Clearly they were busy did not want the job.

Description of Work
Rebuild of porch replacing cedar with Trek

Frank and his team did a wonderful job on our garden level patio. They demoed the old patio, removed the old pavers, put up Trex flooring, a new accent wall, and a new fence. It is exactly as we wanted and Frank was a pleasure to work with.

No response for estimate. I even called their office requesting one. No response again. Handyman located instead.

After second attempt to connect for estimate we scheduled appointment. CPA cancelled and has not called back to reschedule

HI [Member Name Removed], Very sorry to hear we dropped the ball. I was out of town for a week attending to some business, and thing sometimes fall though the cracks during the busy season. If you would like to try for a third time, lets talk on the phone this week. My cell # is 773-370-3325 Thanks Frank Shubert Chicago Porch 773-370-3325
5.0

excellent work. Took a little time to get scheduled, but once it was set, the work was done on time, extremely well, and great clean up. Very smooth overall process and I would highly recommend.

Our old porch, which had been built by a general contractor in 1989, was failing--missing balusters & pickets, eroding porch front & stair edges, front porch sloping. I knew the owner of C.P.A.--he was my neighbor and had started the company under a different name a couple of years after I had the old porch done. Called that company, which told me that when he had left the area, he had sold them the name but they didn't operate inside the city--then they told me about his new company. Went to the website, was impressed, and called him. He'd moved back to our neighborhood. He inspected my porch & stairs, then showed me how he would replace it--all of it. I also showed him my deck (built by Harmonious Decorating in 2013) and that because the decking planks were too close together, water would pond up, and freeze in winter. He suggested routing wider grooves in strategic places. Not only did C.P.A. perform all the work within four days, it also repaired some eroded siding on the inner porch sides, and made sure everything was level. I still get compliments on my porch & stairs--even from taxi drivers who drop me off!

Excellent. The new porch has completely transformed the look of my house.

Description of Work
Built a new front porch. The old concrete porch was eroding with holes in the concrete. Replaced with Trex.

I am the property manager for a large condominium association containing approximately 300 units, with a roof-top community deck and private decks up to 2,000 sq. ft. per. This contractor, Frank Shubert, has done outstanding deck work for both our Association and the private homeowners. He is our absolute go-to person for any deck issues whatsoever. We have received nothing but glowing reports. Frank is very honest and can offer wonderful suggestions. Book him early! His work is remarkable and worth any wait.

Description of Work
I am the property manager for a large condominium association containing approximately 300 units, with a roof-top community deck and private decks up to 2,000 sq. ft. per. This contractor, Frank Shubert, has done outstanding deck work for both our Association and the private homeowners. He is our absolute go-to person for any deck issues whatsoever. We have received nothing but glowing reports. Frank is very honest and can offer wonderful suggestions. Book him early! His work is remarkable and worth any wait.

Wish I would have seen these reviews as I called Frank. Same experience. Missed an initial appt for whatever reason. Came out and measured for my project on a Friday. Said quote would be back on Monday. No quote. Called 2x to follow up. No call back. No response. I guess its a pattern. Professional on site and I thought we could have successful communication about my project but that's not possible when there is ZERO contact or follow through. If i worked like this in my job, I wouldn't have one. If you call Frank, don't expect much based on the other reviews and this one.

Description of Work
He didn't. Plus, based on all the negative / no show reviews, I don't know how he is allowed to be a provider on AL. I thought they had a policy on this.

Chicago Porch Authority Inc is currently rated 4.5 overall out of 5.

No, Chicago Porch Authority Inc does not offer eco-friendly accreditations.

No, Chicago Porch Authority Inc does not offer a senior discount.

No, Chicago Porch Authority Inc does not offer warranties.

Are there any services Chicago Porch Authority Inc does not offer?