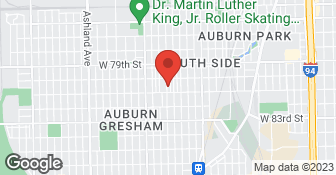 They spent about 30 minutes taking measurements and discussing the project, as told I would see a quote withing 1 week. Never heard from them again.

Description of Work
Came out to provide free quote.

Description of Work
Installed a new roof and facing on the garage.

Peerless Fence Group is committed to providing our customers with quality work, service & industry expertise since 1961. We are a family owned & operated business that offers fence products & gates as well as fence repairs. We're the company that residential, commercial & industrial customers trust most when they need a new fence installation. We have 6 locations so you know you have an office that is close to you. Our service area includes the Chicagoland area, southern Wisconsin, western Indiana, Indianapolis area & south into Bloomington / Champaign. We specialize in aluminum fences, chain link fences, composite fences, steel fences, vinyl fences (PVC fences), wood fences and wrought iron fences. Plus we provide fence solutions for privacy fences, security fences, ornamental fences, pool fences and dog fences. Our gate operator division offers many solutions when you need a residential, commercial or industrial automated gate. We will work with you to create a complete turnkey system consisting of a gate, operator and access control unit. We proudly include these brands: Peerless Fence, Tru-Link Fence & Products, The Fence Store, Shogren Fence Inc., IFFT Quality Fencing, Inc., Woodland Fence, Imperial Fence Co. and Gate Options.  …

How is Budget Construction overall rated?

Budget Construction is currently rated 1 overall out of 5.

No, Budget Construction does not offer eco-friendly accreditations.