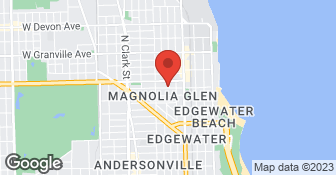 3 EMPLOYEES. NO SUBS. CHARGES BY THE HOUR. TRAVEL CHARGES MAY APPLY. EXTRA CHARGES FOR AFTER-HOURS SERVICE MAY APPLY. MAY CONTACT THROUGH EMAIL....

Amruss Inc Home Improvement has been in business for more than 20 years. Everybody knows us for our professional window washing and gutter cleaning services. But besides those, we also provide the whole variety of other services like Power Washing, Deck Restoration, Garage Cleaning, Caulking and Grout services. We offer fast, high quality and professional services with affordable pricing. We value every customer and strive to provide the best service possible. Award-winning. Additional DBA - Amruss Inc. Cost is determined by the job.  …

In each instance, light repair, installation of new wall lamps, gutter repair and replacement, kitchen under-the cabinet light fixture repair, Antonio was available within 1 or 2 days. Came on time and did the work efficiently and completely. We have used him in our 3-unit condo several times with success.

Description of Work
We have had Antonio several times and each service was provided promptly and efficiently. He is a sincere hard-working man. Would trust him with any handyman work we need.

called to hang pot rack, and a number of other fastener vs cement /dry wall problems in closets. done perfectly, he is neat, and has a variety of skills including electrical.

Description of Work
Antonio goes above and beyond in every category. Yes, at times, there is been difficulty with phone communications.....persist......he is worth it.

I don't remember what I paid but it was a good deal. He was great. He was very clean and had the booties for his shoes. He was very conscientious about any mess that he created. He explained everything prior to doing it. He was really top notch. I would use him again; he is on my short list.

Description of Work
I used Atapuma Handyman to do some drywall patching.

We recently had Mr. Atapuma do a second job for us. The biggest part of the job was the concrete floor in two rooms of our finished basement, which we wanted stained and polished. Mr. Atapuma was knowledgeable about the process. He warned us that the floors were too old and uneven and stained to look that good with an acid stain, and suggested painting them and then polishing them instead. We weren't sure, and got some stain samples anyway, which he applied for us in a closet. We saw that he was right and decided to go with the paint. He and his assistant got the floors as clean and smooth as they could, applied two coats of paint, and then a few days later, a coat of polish, and we were very satisfied with the result. Some baseboard and drywall was still damaged from flooding that had happened previously. He spotted this and we had him take it out at the bottom and replace it, then fix some cracks and paint the walls in the two rooms. This was all done quickly and professionally. The $2500 for these jobs included most of the materials required.

I contacted this company to arrange for an estimate. The person who answered their phone number wasn't a native English speaker and was difficult to understand. He took my name, telephone number and a brief description of my request. I was told someone would call me back in order to schedule a visit to my home. The same person did call me later on the same afternoon, but told me he was only confirming that telephone number. I never received another call from the company.

Description of Work
I contacted this company, by telephone, in order to obtain an estimate. No services were provided because the company never provided an estimate.

the repor it was so difucult to reach the apartament not number sorry for incomvenient
5.0

We previously had an interior drain installed in the back of the house. Water was still coming in under the back door (and the company that did the work, meanwhile, had gone out of business). Mr. Atapuma took a look at the back door (which we had previously tried to seal up with sealant under the plating), and discerned that the concrete in front of the door was cracked and needed to be redone. He then jackhammered out a 3X3 section of concrete, and saw that furthermore beneath the side of the door there was a gap. He brought bags of cement, and filled in all the gaps and redid the concrete. Two days later, when it had dried, he came and sealed and restored the metal plate beneath the door (don't know what it's called). There was a big storm that night, and the area stayed bone dry. While he was there, it came out in conversation that Mr. Atapuma had an electrical engineering degree in Ecuador before moving to the US. We told him about a problem we were having with the cable TV wiring in the house. We had discovered only after the warranty on the house had expired that none of the cable outlets worked on the top floor. A previous handymen had taken a look and told us there was no way to know where the wiring hadn't been connected up, and he would either have to tear out a bunch of drywall all over the house, or reinstall wiring all over from the outside in. Mr. Atapuma tested all the outlets for signals, then opened up the ones upstairs. He noticed that the wires were going up in the walls in all the outlets. So he opened the attic door, and discovered that none of the cables had been connected. He went to Radio Shack, bought some connectors, and resolved the problem. He also fixed our intercom system, which hadn't been working for years. He took a look at it and figured out that the original electrician hadn't grounded the system properly, which led to it getting fried in a storm long ago. We ordered a replacement unit from the company (cost about $450), and then Mr. Atapuma installed it. He fixed the light behind the doorbell button as well. It's now in good working order. Mr. Atapuma is also personal and friendly as well as knowledgeable and professional, and seems highly detail-oriented. I happened upon him in the alley sweeping up dirt and garbage in front of our gate before moving his equipment in, He charges $35 an hour. We have already asked him to do two other jobs in the house.

We have used Antonio twice, and plan to use him again in the future. He is responsive, reliable and friendly. He has made himself available for same-day and next day appointments, and worked into the evening for us to get a big job done. The price is reasonable and the service is great.

Description of Work
Antonio removed an old ceiling fan and installed a new one. He also removed insulation, wood and debris from a crawl space and other storage areas, in preparation for foam insulation.

Mr. Atapuma was great. He came by the same day that I called him. After several estimates and a few "no shows" from other companies on Angie's list, Mr. Atapuma gave me the most reasonable estimate and he did a thorough and beautiful job.I didn't have the lights I needed and some other tools. He worked several hours the first day and came by early the next day to complete the work. He was punctual and efficient; he even saved me a trip to the store to purchase the lights and tools I needed for him to complete the job. He seems to take a great deal of pride in his work and he was very nice and patient.

Description of Work
Mr. Atapuma fixed the electrical problems in the fourth floor bedroom; he installed two motion lights in the back, installed a timer for our front door and lights in the vestibule. Everything works perfectly. He was professional, punctual, hardworking, honest, and very pleasant. Mr. Atapuma is very knowledgeable and you can trust that he will give you a very fair price. I will be calling on him for all my electrical and handyman needs.

timely, exact, personable and less expensive than other providers no upcharge on materials also a licensed electrician and will use him for that in the future

I called ATAPUMA HANDYMAN during the afternoon and he was able to come to my home the same evening to take a look at the situation. We scheduled a day where he would return and he located a couple of shorts in an electrical line which is used for an air conditioner. He replaced the entire line and a couple of hours.

Description of Work
Tested 2nd floor electrical outlet to find why it was not working. Handyman checked all of the connections inside the building and where the line ran along the outside of the build. Handyman found a couple of locations where a short was possible so he replaced the entire line with one single wire from top top bottom so there won't be any problems again.