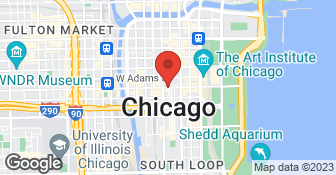 30 employees. Uses subs for plumbing & electrical. Cost is determined by the job. No travel charges. No service charges. Extra charge for after hours service may apply. May contact through email.

Terrible contractor. I spent too much time and energy chasing him only to get excuses as to why he couldn't do the work we contracted him to do and didn't even have the integrity to return our initial payment for work that he never did. On the first phase of this project, he agreed to fix the faulty lighting, clogged irrigation system and dead plants that were installed (less than 30 days prior to their failing) however he never actually showed up to fix these items despite the 1 year warranty that we received. I strongly suggest staying away from this contractor at all costs, you will save yourself time, money and lots of aggravation.

Description of Work
We hired this contractor to install a gate and a retaining wall and to fix the errors and dead plants from his recent landscape installation one month prior (that we paid him $7000). We gave him the initial $300 to start the second phase project and we never saw him again. We called roughly a dozen times as well as sending email communication but he just disappeared. A couple times I caught him on the phone and I think I surprised him because he mentioned sick relatives and being broken into and dying dogs and various other dramas that caused his delay but he eventually just stopped picking up the phone when we called. Stay away from this contractor. He talks a good game and has some great talent but does not work with integrity. He took our $300 deposit and "ran".

GREAT. This guys company also does patios ( did one for me- LOVE IT ) brink work, concrete, and does interior work like drywalling, framing out rooms and building decks. I will use him for all work he does. The guy and his workers at wonderful.

Description of Work
This company came in to give me pricing on regarding my back yard. Another landscape guy had given me a price for removing a 2 foot brink wall that served as a raised garden, and he was just going to do the gradeing. His price was GREAT and his service was beyond expectations. NOTE: The guy who priced out the removal of the wall was going to charge $9600.00 which was highway robbery so I did it myself for $1500. ( Three dumpsters and two days of rental of bobcat- and had a ball.)

How is Andy Anthony overall rated?

Andy Anthony is currently rated 3 overall out of 5.

What days are Andy Anthony open?

No, Andy Anthony does not offer eco-friendly accreditations.

No, Andy Anthony does not offer a senior discount.

Are warranties offered by Andy Anthony?

No, Andy Anthony does not offer warranties.

What services does Andy Anthony offer?

Are there any services Andy Anthony does not offer?