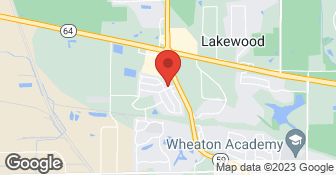 Here at AE Tile we have over 15 years experience in tile, granite counter tops, wood floors, bathroom, and kitchen remodeling, as well as laminate floors. Our experts serve throughout the Chicagoland area in Illinois. We are high quality installers of these materials: • Porcelain• Ceramic and glass• Marble and travertine• Granite and limestone• Quarry and mosaic tileAll of our jobs are owner supervised, and our work has a one-year warranty. We are a family owned business and we personally do all of our installations and take real pride in it. AE Tile works with the individual in order to make sure each job is completed to their satisfaction. We also provide same-day estimates, and produce quality work on every job. All of AE Tiles granite counter tops include a back splash as well as a double sink! Give the team at AE Tile a call today for your free estimate!...

AE Tile just completed a job replacing my 21 year old kitchen floor which was a real mess. They did a fabulous job. I can't believe it is the same room. They were courteous, professional, and efficient. Additionally, the cost of the work was appropriate for the job. I am so glad that I chose this company to replace my kitchen tile. I would highly recommend them Sandra Wittman Carpentersville

A.E. Tile replaced my Floors in both my Master Bath and Hall Bath. They could not have been more professional in every way. The communication was great and the installers were very neat and professional. They gave me some great design advice that I followed and was very pleased with the results.

Contracted with A.E. Tile, Inc. to install a ceramic tile backsplash to our newly remodeled kitchen. Within 2 months the grout was falling out of the joints between the countertop and backsplash, and between the cabinets and backsplash. The business owner (Aldo) came out to take care of the problem. He started by blaming the countertop installer, stating that it was installed incorrectly. Then he blamed the failure on the fact that the backsplash was installed on an exterior wall, where the outside heat and cold permeates to the tile and loosenes the grout due to expansion and contraction. Interestingly, grout was coming out of the joints against an interior wall, as well. The countertop is "L" shaped. Finally, he blamed us for not having caulk for his men to use, which he says should have been used instead of grout. (we supplied the material). O.K., we also were short on a special tile piece, which we quickly ran to the tile store to obtain for the installers. Funny, they never mentioned we were missing the caulk. We could have picked that up, also. There was plenty of time, as these items were not needed until late in the process. The installers never said, "Hey, we need caulk." They just used the grout. I asked Aldo, if like the countertops, were the cabinets also installed incorrectly, causing the grout to come out of these joints? He was becoming increasingly rude as a result of me asking him these types of questions-to the point of him using mild profanity in front of both my wife and me. Finally, he refused to correct the problem. When I suggested he might find himself in court, he laughed. But, in the end, Aldo begrudgingly repaired his work. We'll see if it lasts. This was a very poor display of professionalism. His customer service was nothing short of abhorrent. He was very happy to take our money. But when it came time to stand behind his work? Well, not so much!! Watch out for this guy.

It looks just OK, the guys not doing professional, I would not suggest to use any more. the pricess was high compared with the quality they made. they also asked put additional drywall for one of the bedroom instead of removing the old wallpaper.

Description of Work
remodeling the bath and the family room, laundry room and guest bedroom

It went fine. The only thing is that I do not like the tile that I picked. It is darker and doesn't match the way I thought it would when I took the sample home. I am going to try and lighten it so it blends in better. The work done by A.E. Tile was done excellently though and I am very pleased with the quality of the work.

Description of Work
The floor in my shower was converted from a plastic base to a tile base.

THE INSTALLERS DID SOME GOOD WORK, BUT WERE SLOPPY WITH THE SURROUNDING AREAS. THEY RIPPED CARPET IN AN AREA THAT WAS TO MEET WITH THE TILE EDGE, AND DID A POOR JOB JOINING THE TWO. TRIMMED A DOOR THAT DID NOT NEED TRIMMING. LETTING THE DOOR FALL TO THE GROUND

Description of Work
INSTALLED TILE IN ENTRY WAY AND LINOLEUM IN LAUNDRY ROOM.

Here at Floorscape Design we specialize in hardwood floor installation and hardwood floor refinishing (resanding). We are a family own business and offer nothing but the best.  …

Locally owned and operated company with over 30 years of experience. Owner onsite for every project from start to finish. We want to make all your flooring dreams come true. Do not hesitate to call or text for services.  …

No, A.E. Tile Inc. does not offer eco-friendly accreditations.

No, A.E. Tile Inc. does not offer a senior discount.

No, A.E. Tile Inc. does not offer warranties.

Are there any services A.E. Tile Inc. does not offer?