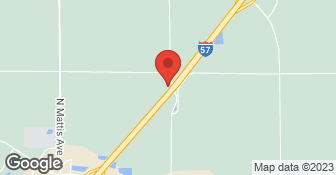 Klismith Tree Service offers expert tree care to businesses and private residences. We also offer 24/7 emergency services to quickly clean up damage from storms and other unexpected events. We are fully insured for your protection and our rates are competitive!...

I contacted this service thru Angie's List the morning of the day that an overnight storm took down part of a tree in our back yard. I didn't receive a response from them until 4 days later. The message said that they were too busy to bother with me and that service couldn't be expected until sometime in the fall (this was in May). They wished me luck in finding someone to do the job. I understand being busy but at least call back sooner so that other services can be contacted. This was a very unprofessional.

Description of Work
Would Never Recommend

Good evening [Member Name Removed], Thank you for your feedback. According to the record of our exchange in Angie's List, you contacted us on Thursday, May 23 at 11:33AM. We responded to your message on Saturday, May 25 at 9:43AM. That is a turnaround time of a little over 15 business hours. We were inundated with calls/emails from many residents in the Champaign-Urbana area that had sustained serious damage from that same storm. We did our best to reply as quickly as possible to everyone who contacted us. As to your assertion that we were "too busy to bother with you", our message actually said the following: Hi [Member Name Removed], Thank you for contacting us. Unfortunately, we're already handling emergency jobs from this storm, and our regular work schedule is booked into the late fall. I'm sorry that we cannot accommodate your River Birch. I hope you are able to find another tree company to help. Best, Keith Please understand that we in no way meant to convey that your tree, or your situation, was unimportant to us. We were simply physically incapable of handling your request, and we tried to let you know that as quickly, as succinctly, and as professionally as possible. I am sorry that you believe we fell short of that. Sincerely, Keith Klismith
5.0

Description of Work
Removal of trees and other growths in back yard.

Klismith answered our call the very same day. Keith and Anthony arrived next morning, listened, advised, made a plan and luckily for us could executed it the very same day (they said "the very same day" is not the norm, so we should not expect it every time we call). This is the second time they do work for us and both times we were very happy with their work, attitude and prices.

Description of Work
Klismith's man (Anthony) pruned our large maple and took away 2 sick pines. He cleaned the mess and left only after we were completely satisfied.

Description of Work
Two 65 years old maple trees were cut out and removed from our backyard in one day, some clean-up was done the next day. The trees were transported in pieces over the roof of our hose using a crane. With this difficult set-up the action was planned and executed with high precision and professionalism. |I would highly recommend KLISMITH TREE SERVICE to anybody, Ludo.

Description of Work
Klismith cut down and disposed of two large arbor vita trees in our back yard that were threatening to fall over on a picket fence. They also trimmed small branches off a large sycamore tree. They did a super job and we're very pleased with their professionalism. Will definitely use them again in future.

Keith Klismith came to inspect the tree and wrote a detailed proposal outlining exactly what would be done to the tree, why and at what cost. Even though this quote was the most expensive, we accepted it because it made the most sense for the long term health of the tree and the look of our back yard. Keith warned that his work backlog was extensive and it took a month before the job was started. Klismith brought a crew of three to do the actual work. It was done quickly and cleanly. There was virtually no damage to the mature plantings which fill our yard or any of our property (including an in-ground pool and koi pond) even though the space was tight. The end result was a beautifully trimmed locust tree and perfectly cleaned up yard. I would recommend Klismith Tree Service to anyone looking for a superior job!

Description of Work
Trimmed a large honey locust tree in our back yard which was encroaching on the house, power lines and neighbor's trees.

Keith Klismith has worked for us on two occasions, first (fall of 2012) removing a tall spruce and a small willow, and trimming dead wood and branches encroaching on our house from large pin oak trees. The job was in a very tight space that would not have been accessible to a truck with a cherry picker, so the work required climbing the trees. Keith was prompt in responding to our inquiry and scheduling a consultation. When he visited, he was very cordial, professional, and thorough. We never felt rushed and were able to ask as many detailed questions as we wanted to, including general questions about managing tree health. He was very knowledgeable and gave honest advice, including recommendations to remove branches that would need removing a few years from now, but would be more economically taken care of while he was doing the other work. He was prompt in getting a detailed quote to us. Since scheduling was subject to weather and his availability, he gave us a general sense of when he would be able to do the work, then contacted us a few days ahead of his arrival. The work was done skillfully and the cleanup afterward was amazing, leaving the yard cleaner than it had started. We had even mentioned that we had a stack of old firewood that we wished to get rid of, and he offered to clear it away and give it to someone who could use it. In the fall of 2014, Keith returned to this same house and removed additional dead wood from a tall pin oak. When he wrote to say he had completed the work, he noted that he had accidentally dented a downspout in the process. He had done his best to fix it, but said we should let him know if it wasn't adequate, and he'd be glad to make it right. We appreciated his integrity and honesty. Also in the fall of 2014, we had Keith visit our new home and advise on what to do with a number of large, mature trees and shrubs. He spent quite a bit of time assessing and advising (despite the fact that it was raining), and gave us a thorough quote. All in all, we are extremely pleased with Klismith's work and highly recommend him.

Keith Klismith was very professional, came over and gave me estimates on three trees I was considering having trimmed or removed. I decide to remove only one, which my neighbor had been complaining about for some time. We scheduled the job for January, but he had an unexpected opening and asked if he could do the removal in December. He came over late that morning, worked until after dark, and finished up the next morning. He and his assistant did an excellent cleanup of my yard, the neighbor's yard, even the roofs of both houses. I was very happy with the work and have no hesitation to recommend Klismith Tree Service. He will be my first call when I get back around to those other two trees.

Description of Work
Removed a large ash tree, cut the stump to ground level, cleaned up all residue.

Description of Work
Removed branches that had partially come down during storm. Very responsive in quasi-emergency situation (branches were hanging over power lines, etc), gave us helpful advice about the tree's health overall, and did the work efficiently.

Last year, in 2013, Keith Klismith came to look at our peach trees and gave us advice on what to do with them. He did not charge for this consultation. I made a note to contact him at the end of February 2014 to schedule an appt to have him prune our peach trees (we had 2). Because of the weather, we had to keep in touch for a couple of months as we were waiting for the trees to flower before pruning. He came in May after we determined that there would be no blooms, nor peaches, this year so that he could prune the trees. He was honest with me about one of the trees being nearly dead. He said he didn't want to prune it just to have it die in 2 months. He instructed me on how my husband could go about taking it down so that we could save money. He then pruned the one remaining tree, doing his best to shape it in a way that would be most beneficial for growing next year. We were very pleased with the work he performed.

.We called several tree services and couldn't get any of them to even return a phone call, until we found Keith. He called us back, got an estimate to us promptly, and we scheduled the service for his next available time which was several months away. He said to expect him in mid-January, and as we had snowy and windy weather for much of the winter, he kept us informed about the delays. When he and his crew showed up work progressed quickly, with Keith in the tree, a crane operator moving huge hunks of tree, and a guy on the ground trimming off small branches from the sections that had been removed from the tree. The smaller pieces were chipped into a truck as the work progressed. At the end of the work, they cleaned up with rake, shovel, and a leaf blower to remove small bits from the snowy street and from around their work areas at the tree and in the front of the lot where the big logs ended up. That evening and the next day, they were back to pick up the logs and to clean up again. They did a great job, inspired confidence in their work, and cleaned up very well. We will certainly call them again.

Description of Work
Removed a very large maple tree that was close to the house. He cut it to ground level and hauled away all the debris.

Klismith Tree Service is currently rated 4.9 overall out of 5.

No, Klismith Tree Service does not offer eco-friendly accreditations.

No, Klismith Tree Service does not offer a senior discount.