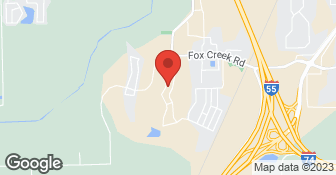 Nate delivered with a personal touch. We had a small project. His initial design was what we wanted, but since we couldn't do it all at once we split it up into two parts. He accomodated our schedule and delivered a superlative patio and associated landscaping while also fixing mundane problems like gutter drains. The new drains are invisible and functional. he chose great plants that will grow in a complimentary way. His crew worked like a team - efficiently and professionally while we were out of town. Every visitor and contractor who comes by is impressed that he did the job so right the first time. Nate is very personable and easy to talk to.

Description of Work
design and landscaping.

Met with Nate in May, 2015 & explained what I wanted him to accomplish. He brought back a detailed design blueprint a couple weeks later, along with an estimate of the work to be done. We reviewed the plan and he explained all the details and gave me a book with examples of the different types of hard-scape design to choose from. Not really being able to picture the finished product, I pretty much just went along with what Nate recommended. He explained at the time that he was very booked up, and would probably not be able to get to the project until September, and that if I wanted to reserve a spot on his schedule, I would need to do a down payment, which I did. About the middle of August, I called Nate to see how his schedule looked, and he said he would be there around Labor Day. The day after Labor Day, much to my surprise, I received a call from Nate saying his crew was on the way up to my residence. It was a very pleasant surprise to have a contractor actually show up when they said they were going to!! It only took them 2 1/2 days to complete the project, and it was done exactly as designed. It was actually much better than what I thought it would be. I initially had some concerns about some of the hardscape, but agreed when Nate said he thought it would look nice, and he was right!! I was very happy with the final project - he and his crew went above and beyond to do quality work & use quality materials. The plants were healthy-looking, and the walkway, columns, and edging all looked great. Bottom line - company was on time and on budget, and the work was done exactly as promised (and more). They even re-graveled my parking area & didn't charge extra for it. I would highly recommend Serenity Creek Landscape and Design to anyone interested in a contractor that does exactly as promised!

Description of Work
Designed and landscaped front and sides of house.

Serenity Creek Design & Landscaping is currently rated 5 overall out of 5.

No, Serenity Creek Design & Landscaping does not offer eco-friendly accreditations.

No, Serenity Creek Design & Landscaping does not offer warranties.