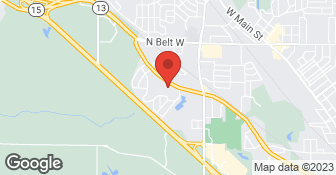 Craig, the company representative, was very thorough and informative. He did not try to oversell and answered all of our questions. The men who did the install were very pleasant and worked nonstop. They explained the equipment. I can't begin to say how pleased we are with our choice of Sigman and would highly recommend them.

Description of Work
We needed a new furnace & air conditioner. We agreed to the install on Friday and on Wednesday we had a new Bryant system.

The service guy was very friendly, professional and explained the problem before repair.

Description of Work
My furnace was not igniting and was blowing out cool air. I called Sigman at 2:45 and someone was out at 3:30 and addressed my issue. He explained what the problem was and the cost before he repaired it. As of 5:15 I had heat and my house was getting warm. THANK YOU for your quick professional response!!!

Extremely professional, prompt, and kind. They are the only company I would ever call in the future.

Just fine, cleaned out all of leaves and coils, checked caliper etc. Found all in good condition. Big relief.

Description of Work
Air conditioner check up and cleaning.

Everything I said for October 4, 2016 applies equally to April because both occasions if was John A. Both occasions he did the work. He did more work in April then he did in October because he looked at the air conditioning unit outside and cleaned it. He did everything that he did in October plus he did the air conditioning in April. Everything that I described him doing as far as his professionalism and all that stuff applies equally to April.

Description of Work
That was for the Spring check where they checked the air conditioning unit outside and cleaned it. In the Spring they check the HVAC.

I?ve used them for a long, long time and they were terrific. They did a great job for me. I had a maintenance contract with them and I don?t have it anymore. I don?t need the maintenance anymore because the HVAC is getting old. They would come and do maintenance on my HVAC. They were a great company, they came twice a year and cleaned it. I had nothing but the highest praise for them. They do twice a year in the Spring and the Fall. They are not coming this year because I am not going to renew the contract. It has nothing to do with them. They did a terrific job and always have. They would be a 5 on any category for me or as Angie?s List would say, they would be an ?A?. When I started using them I got the 5% or whatever Angie?s discount. Ever year thereafter, they would just go ahead and give me that same rate. Will I use them again all depends on which HVAC unit I buy. If I buy an HVAC unit from a dealership that provides a maintenance contract through that dealership, I may have to go with them. If that?s not the case and I decide to get I will definitely got back to Sigman, that?s how highly I thought of them. I like to do recurring maintenance, that keeps the units working better for a longer period. I can?t promise that yet, because I don?t know what?s going to happen yet when I buy the new HVAC unit. I am probably going to buy the new HVAC in about 6 months. I really don?t know what to say about that. I had an annual service contract and it covered two visits a year. I paid for the contract once a year. The service rep?s name was John A. He?s the guy that?s been coming out routinely. I would use him just about anytime, anywhere. He?s real honest and very professional when he comes into the house. He?s a guy that puts on these little shoes when they walk in your house. He didn?t ask, he just puts them on before he comes in and he is very thorough. He doesn?t sit around and talk, he goes right to work. When he gets to the end and goes over everything he?s done, he will talk. Like if you ask him questions, he doesn?t make you feel like your rushing him. He?ll answer any questions you have, but he?s not there to chit chat, he is there to work. I like that is ready to stop and answer any questions you may have. He is a quality guy. The units are almost 20 years old and I?m not going to keep sinking money into maintenance contracts and home warranties that won?t pay off, when I know that I am going to turn right around and get rid of them here in the next 6 months. I just decided to save myself a little bit of money and when they blow up, I?m just going to replace them. I?ve put the money aside for that rainy day. If I thought that this thing could stay up for another 2 or 3 years, then I would obviously go ahead and get another maintenance agreement and make sure I?ve got it running as efficiently as I can.

Description of Work
The called it the Fall check and service, where they changed the air filters and cleaned the blower compartment. They check the motors and all the electrical connections and cleaned the unit. They did that for two furnaces.

Description of Work
AC Check Up

Description of Work
Heater was INOP, tech trouble shot within 5 min knew the issue and gave me 3 coirseof actions to consider.

It's $139 a year for fall and spring service. They also installed my unit. The technicians I came in contact with were fine. The work was fine.

Description of Work
They did a routine check on my furnace.

They came in to repair the central air unit. Tracked mud all over my hard wood floors. Charged me for a part ($160.00) they put on the broken a/c plus $100.00 service call. They did not follow up on a new unit as agreed. They would keep me on hold 15-30 minutes when I called them. Finally had to purchase a unit from another vendor. Sent their part back certified mail and had my credit card company deny payment.

Kwik Dry Carpet Care's mission is to educate our community on how to take the absolute best care of their carpeting, rugs, ceramic tile and grout, wood floors, air ducts and upholstery. We have committed ourselves to the highest level of integrity, education, customer service and cleaning procedures. This ensures that you will experience a lasting enjoyment of clean, healthy carpets, floors and fabrics.  …

We are a locally owned and operated company that has been serving all of Saint Louis, Charles, Jefferson, North, South, and West Counties since 2015, exceeding expectations one customer at a time. We specialize in Chimney Sweeping and Inspections, Air Duct Cleaning and Gutter Cleaning. Mold Remediation and Water Damage Restoration with emergency services as well. We also handle working with the insurance company for your claim if necessary. Give us a call today or visit www.mccservicesonline.com for more information!  …

As awareness of the danger of lint build up in the dryer system increased, Dryer Vent Solutions, LLC was formed in 2001, specializing in the cleaning and servicing of dryer vents in both the residential and commercial sectors of the greater St. Louis, Missouri region. We have since grown to a company with more than over 2,000 clients in our customer base as we continue to expand our service, products and accessory business. In 2004, we added air duct cleaning as an additional service. Dryer Vent Solutions, LLC has a full line of equipment capable of cleaning air ducts from small apartments to light commercial buildings. This equipment runs the gamut from portable to trailer mounted vacuums and compressors all designed to fit the needs of our customers. While business continues to grow and expand, our number one goal remains to be focused on our customer service. We still believe that the "Golden Rule" can co-exist with an expanding enterprise and we put this concept into each and every transaction.  …

No, Sigman Heating & Air Conditioning Inc does not offer a senior discount.