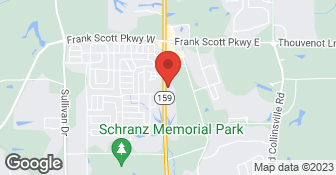 Chesley installed our fence in 1999. For that work, and through subsequent years, we’ve paid Chesley at least $5,145. In March 2004 via email we had to threaten to go to the Better Business Bureau or to Chambers of Commerce after we tried since mid-June 2003 to get Chesley to replace a rotted fence post and to install a fence gate. On 19 November 2013 we requested Chesley replace a broken fence post. After numerous emails – resulting in no work or contract offer from Chesley – we told Chesley on 4 January 2014 to forget it. Overall, when Chesley would eventually show up, their work was acceptable. What was totally unacceptable and insulting: blowing off a long-time customer

Description of Work
Failed to respond to repeated requests for service. I submitted this to Angie's List on 6 Jan 2014.

Had to call them too many times as follow-up. Owner was late to appointment. Felt like the job was too small for them to bother with even though it would have been 150 linear feet of their best vinyl fence.

Description of Work
After measuring/diagraming was to provide an estimate -- never received it.

The two man team took the time to explain their process and answered all questions I had. They were originally hired to replace two posts but they found that one of the next posts in line was also broken. This saved me the inconvenience of them coming back when the next storm caused that section to fail. They were in and out in about two hours and cleaned up after themselves so I was very pleased with their work. The only issue I had was the fact that they did not contact me before coming out. Fortunately I was home so no harm done.

The end project met my expectations. The craftsmanship was outstanding, late starts and unexpected work schedules were disappointing. Better communications and a better understanding of the scope of work would have made the job less stressful. I will recommend and use Chesley Fence again.

Description of Work
We had an old cedar fence removed and replaced in kind.

I feel the quality of the work done was good they would good intially to come out here but were not good at all and repsonding back to me and their professionalism was so so. I would not use them again.

Description of Work
I used Chelsey Fence out to have my fence work done.

The job was scheduled and the guys showed up first thing in the morning. It is a good idea for you, the homeowner, to lay out with some string how you want the fence routed/installed, this save the crew a lot of problems and questions from me later. The guys worked carfully around my newly panted yard. I failed to locate the gutter drains running in the yard so they did hit one during installation but fixed it before filling it back in, the important part was that they let me know that they hit it....honesty. The 3 guys that showed up worked to get the fence installed and about 3 hours in 4 more showed up, they were able to get the fence completed in one day which was great!! They cleaned up after themselves and went over how to operate the gate self locks. About 6 months later one of the gates needed to be adjusted, I called and they came out the very next day and made the adjustment, once again, fantastic.

Description of Work
After purchasing a new home we looked for a fencing contractor, we received bids from several companies and Chesley came in $2000 less than anyone else. Mr. Chesley came out and took a look at the job and gave me a cost, he was very confident he would be less than anyone else that we called, he was right!! He didn't try to sell me anything that I didn't want or need for my house. This company is upfront and honest in what they sell and do.

They did an excellent job. Their work was just awesome. They sent out good professional guys that knew what they were doing. We have had no problems with our fence.

Description of Work
Chesley Fence did our fence about 10 years ago.

They came out and replaced several posts and panels and everything was fine. Their price was a little high, but we needed it done as were were going to sell our house. Then more panels started to fall the next year and we tried to get them to come out to fix them. We called and called and called, and every time the person said that they would be out to give us an estimate. They never showed. So we went with Liberty Fence out of Bethalto. Not only were they more affordable, but also they were more prompt and courteous. We would probably not use Chesley again.

Description of Work
We used this company to repair our fence that was originally put in by them. The wooden posts had rotted off and part of the fence had started to fall down.

We placed the order in early April and was told 3 weeks before the fence would be shipped. The work was finally done at the end of May. Constantly had to call the company for updates. Only once did they call us. To check on if we wanted to submit the order. Very poor customer service for communicating with the client. Once the installation date was established, they did show up on time. We're pleased with the finished product.

We placed our order in March but didn't get it installed until late June. From the original conversation we thought we'd get the new fence installed in late April.They told us a couple of times that they were going to start but then for various reasons did not. We had to call them to get updates. The utility company had to mark the lines several times because of the delays. The work they did was fine, just the timeliness and communication were lacking.

Description of Work
They removed our old fence and installed a 6-foot privacy fence around 3 sides of our house.

Abbey Fence Company is a small family owned business that does all work by contract only. We accept checks, cash, and credit cards.  …

Since 1968, Chesterfield Fence & Deck Company has been the builder that residents of the greater St. Louis area have trusted for superior fences, decks, patios, sunrooms and more. Today, we are proud to still be under the original ownership and management, and because of this, our core philosophy remains true. It is our ultimate goal to build the outdoor living space of your dreams through unique and quality products that provide lasting value. Over the years, Chesterfield Fence & Deck Company has grown into a full-service remodeling company. 90 experienced and dedicated employees come to work every morning to carry out our mission to provide the very best in customer service and quality workmanship. Our goal is to provide to you the best products, the best service and the highest value available.  …

All statements concerning insurance, licenses, and bonds are informational only, and are self-reported. Since insurance, licenses and bonds can expire and can be cancelled, homeowners should always check such information for themselves.To find more licensing information for your state, visit our Find Licensing Requirements page.
General Information
Free Estimates
Yes
Eco-Friendly Accreditations
No
Payment Options
Visa, MasterCard, Discover
Senior Discount
NO
Warranties
No

How is CHESLEY FENCE overall rated?

CHESLEY FENCE is currently rated 3.6 overall out of 5.

What days are CHESLEY FENCE open?

No, CHESLEY FENCE does not offer eco-friendly accreditations.

No, CHESLEY FENCE does not offer a senior discount.

Are warranties offered by CHESLEY FENCE?

No, CHESLEY FENCE does not offer warranties.

What services does CHESLEY FENCE offer?