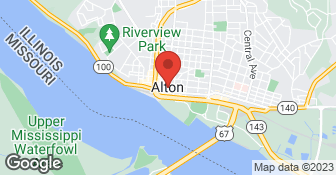 Premier Painting and Design Inc. has grown to have its name to be synonymous with quality. From its beginning in 1995, our locally owned and operated business has earned a reputation of being one of the area's finest and most respected painting contractors. We are a business built on years of customer referrals. Our emphasis on customer service, attention to detail and using the highest quality products in the industry proves our commitment to providing our customers a beautiful and durable finish they will enjoy for years to come. That is why we are the primary choice for Metro East homeowners, designers, realtors and professionals.  …

We are a small family-owned company that offers great service at a reasonable price. We are very proud of our work & it shows. We are on time and ready for our appointments. We always maintain a good working relationship with local inspectors and utilities to keep the projects going smooth. We are a member of the (IAEI) International association of electrical inspectors. This gives us access to continous training on new technologies and National Electric Code updates.  …

Family owned company with over 20 years of experience in residential painting, decorative finishing, and refinishing of fine furniture. Please visit our website for a full list of services offered.  …

Fixed leak near chimney and replaced some boards. They told me the leak would not come back, but it did they charged me a arm and leg just for some tar around the chimney that was not fixed. I had to have the roof replaced and the roofer that did it showed me the spot they missed. I will NEVER use FETH again. Over priced and lack of Quality.

Description of Work
Fixed leak near chimney and replaced some boards. They told me the leak would not come back, but it did they charged me a arm and leg just for some tar around the chimney that was not fixed. I had to have the roof replaced and the roofer that did it showed me the spot they missed. I will NEVER use FETH again. Over priced and lack of Quality.

Description of Work
Feth Construction was contracted to remove old concrete patio along with two concrete steps in back of house and remove stone walkway in front of house. Both of these areas were then to have new concrete poured including the two steps. This was a two day job so on the first day a jack hammer was used to destroy the old cracked concrete in the back of the house, in the front of the house the stone walkway was removed. Day two saw the final removal of all debris and the forms were set. The Redi Mix Truck showed up around noon or a after and because I did not want my yard tore up they used wheelbarrows to move the concrete where it needed to go. I work on second shift so I had to leave around 1:15pm, the work was still going on at that time. Day three two boys showed up to remove forms.

We did not do this gentleman's work
5.0

I own a 60 year old home with 60 year old windows. Tim Feth and his employees replaced the windows, roof, and painted the exterior. He did not just roof over the existing shingles, he tore it all off and replaced the roof. After all his jobs, he cleaned up every bit of his work. I have not found one nail in my yard. He is courteous, knowledgeable and very accommodating. I intend to hire him to replace some countertops, more windows, and electrical work. As long as I own this home, I intend to strictly use Feth Construction.

My experience with Feth Construction was amazing. Tim and Denise are professional and friendly. Tim was able to come out the same day I requested an estimate. He gave me a fair estimate; didn't try to gouge me with work that wasn't necessary; and was out within the week to start the work. I had a lot of old peeling paint on the trim along with some rotted boards and he did an amazing job! His work was professional and they did not leave any mess for me to clean up. His prices are very reasonable. You definitely get what you pay for with Feth Construction. It appears that Tim follows the old motto "do the job right the first time." I will continue to use Feth Construction as long as I am here. I would highly recommend them to anyone!!!!!!!

Description of Work
I had all the trim on my home scraped and repainted, several windows replaced and roof replaced.