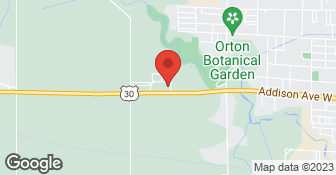 Your surroundings—whether residential or commercial—embody all the benefits that you have worked so hard for, and that’s why we take immense care to deliver the highest level of personal attention to each of our projects to create a memorable, integrated landscape that perfectly complements and supports the architecture it surrounds. We understand that, like most great investments, quality landscapes should be beautiful each moment and built to last a lifetime. We oversee the design, installation and maintenance with a trained eye and master craftsmanship so that no detail is beyond our reach. We invite you to share your vision with us. Between your needs and our experience and expertise, the ideal landscape can flourish....

Lawnscapes LLC is the contractor used by the builder of my house for landscape and fencing. The builder agreed to pay for fencing the backyard and I agreed to pay for fencing the sides of the house. The sides were 7? on one side and 8? on the other, on the side that was 8 feet I asked for a gate to be installed. Lawnscapes LLC charged me for 16? of fencing at $28 per linear foot ($448) and $300 for the gate. Lawnscapes refused to deduct the width of the gate from the charge, something other fencing contractors deduct because the vinyl used in the gate is already cover in the cost of the gate. I paid the $748 per my verbal agreement when the estimate was given to me over the phone. When the work was completed I noticed the cheap fencing materials that were used and that upon completion of the fence in the backyard the installers had failed to fill in all the holes for the fence poles. In order to be a good neighbor, I filled in the holes myself. I will never use this contractor again.