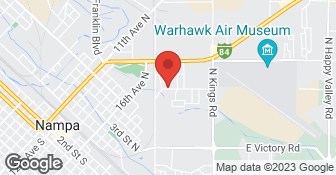 We are a full service concrete & excavation company. We accomplished accept all major credit cards....

We are a family-owned & operated business, dedicated to providing you with the best quality of service in the Boise area. We will be happy to meet your construction needs while keeping our prices reasonable for all of the hard-working people trying to save money with the current economy. We are licensed, bonded, and insured to do any Residential Remodeling; and we look forward to doing business with you.  …

Bryan was highly recommended by a neighbor. I saw him on Angies List, Craigslist and Facebook and decided to contact him. He responded right away. The concrete patch repair was finished at his first opportunity. He charged me his minimum charge. He was kind and professional. I plan on hiring him again to extend an RV pad.

Description of Work
Irrigation access point was leaking and Bryan was able to patch the concrete from the inside and outside of the leak.

Description of Work
Bryan did a good job on our patio so we referred him to both neighbors, on each side of us and neither one of them were happy. One side, my husband had to go help him finish the concrete since he was getting into trouble. He poured their patio, and did not pour it in the design the client wanted and then within a week, there were cracks due to how he placed the stakes and air pockets got into the lower part of the concrete. My neighbors called him back out, and Bryan said he would fix the problem, our neighbors even said they would pay for the supplies, they just wanted his labor to be free during the repair. Then he never showed up. They have called him several times and he won't retun calls. He borrowed some of my husbands tools and never returned them. He also won't return my calls. DO NOT USE THIS GUY- HE IS A THEIF!

My name is Bryan Barrera and I feel that this report from the member is absolutely untrue and unfair. I was contracted by the member to extend their patio, which I did according to their design. They were very pleased with the work. Her neighbor then hired me to extend their patio, according to their design. I formed up the patio and had the neighbor "OK" the design, before I even ordered the concrete, which I always do. She wanted me to make it a little bigger, which I did. I then had her "OK" the design again before I ever order the concrete, again, this is protocol. She said that she liked that design and told me to go with it. I then ordered the concrete and placed the patio extension, I also poured a sidewalk and small pad for her garbage cans. After the job was done, we cleaned up and continued to do three more projects in that same neighborhood. Most all of the member's neighbors. About three weeks later, I get a call from the neighbor, saying that after looking at the new patio extension for a couple weeks, she realized that she should have made it bigger. Also that there was a small pocket on the vertical face of the concrete where the stake was holding the form in place. This is very common. It is fixed by putting grout in the void where the stake was. This is not a problem and can be fixed in the matter of five minutes with a special grout mix that I carry in the truck. Again this is very common. The neighbor wanted me to tear out the new patio extension and make it bigger. She stated that she would pay for the materials, but wanted me to provide the labor for free. I told the neighbor that I had formed that patio and changed it twice before moving forward with the project. I also told her that she was the one who changed it twice before "OK"-ing it to move forward. I run and operate a business who's goal is to generate revenue. I told her that I would tear it out and replace it, but I had to charge for it. I also said that I would discount that price to help out the situation, but I could not just provide the labor for free. About three days later I started getting harrassing phone calls from the member, accusing me of doing a poor job and stealing her husbands concrete stakes. Since this wasn't the member project, I felt that it was not any of her concern and that I could deal with this issue with the neighbor alone. The member also went onto Craigslist and posted a slanderous ad about me and my company. I then had my attorney contact the member through email, and I haven't had any further issues with the member. To shed some light on the report of me not returning stakes that I had borrowed and getting into trouble pouring concrete. The member's husband, is a concrete guy who works for a concrete company here in Boise, Idaho. He wasn't working a lot at the time and was around a lot during the day while we were working. While we were forming the neighbor's job, we ran out of stakes. I told one of my employees to take the truck and run down the road to another job that we were doing in that neighborhood and grab a bunch more stakes. I really only needed about ten more. He overheard this and insisted that we just use his since they were right there. I normally wouldn't have done this and anyone reading this would know why by now. I agreed, and used his stakes. To show my gratitude for this, I ordered an extra half of a yard of concrete and poured a little garbage can pad for him that same day, at absolutely no cost at all, but you won't find that in the member's report about me and my company. When we were all finished and cleaned up, I had my employee return the 9 concrete stakes that were borrowed, then we moved on to the next job in that neighborhood, which was the member's other neighbor. We installed 20 yards of stamped concrete on both sides of the property and were cleaned up and finished in three days. The homeowner was very pleased with our work and the timely fashion in which it was executed, he referred us to another satisfied custom. 99% of the work we do are by referrals. I spend nothing on advertising our business. We take these accusations very seriously due to that fact alone. We donate projects to silent auctions every year for the Make -A-Wish foundation along with donating projects to people who have been ripped off by phony contractors. If you notice, this is the one and only report on Angie's list about my company. I felt that the public should know that this was all because of a nosy neighbor.

we are a full-service concrete and excavation company. we specialize in colored and stamped & decorative concrete. there is no job too big or small. we do everything from foundations two driveways driveways and sidewalks. we also do RV pads hot tub pads dog runs and anything in between. we can handle all of your concrete needs.