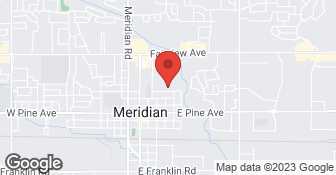 Started out slowly, then James took the money and disappeared. Several thousand dollars were taken. While working on the project James dumped multiple yards of dirt on our lawn. That area will needed to be regraded and reseeded. He had the cement truck drive on our existing driveway, resulting in the cracking of the concrete. The RV pad he poured is below the grade of the driveway, resulting in a slope from the driveway downward to the new RV pad for runoff. The realization of the pad error may have been the motivating factor for his disappearance, but we won't know for certain. The follow-up contractor we hired pointed out a number of quality issues with James Melson's work. Areas where the cement was left with unfinished rock exposed, an area where a low area dips a couple inches from flat (makes a nice pool), and the previously mentioned issue of the new pour not being high enough. While working on the project James had a terrible issue with being on schedule. He also started working multiple contracts. I would not recommend James to anyone, but be certain to not pay him before work is completed.

A painting company with good reputation. I employ from 2-5 employees depending on the scope of the job. I never use sub contractors. We are licensed and offer warranty on all work. We offer free estimates.  …

Jason Melson Construction Services is currently rated 1 overall out of 5.

No, Jason Melson Construction Services does not offer eco-friendly accreditations.